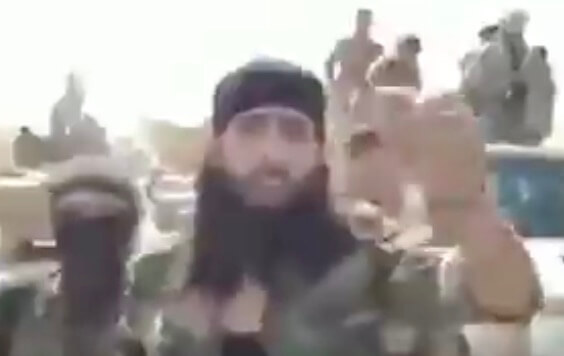 Brussels: Earlier this week President Trump abruptly changed course and green-lighted a Turkish incursion into north east Syria with disastrous results. The subsequent invasion has unleashed a hellish nightmare of carnage and chaos in what was a dangerous, but relatively peaceful, area governed by the Syrian Democratic Forces (SDF) who had just defeated ISIS territorially.

In recent days, over 30 civilians—including Kurds, Christians and minorities, and very young children—have been killed in indiscriminate Turkish bombings and mortar fire. Likewise, the UN reports that over 130,000 Syrians have suddenly become displaced, fleeing Turkish violence. In addition to these massive displacements, Turkey insists that it will forcibly repatriate 1 to 2 million of the 3 million Syrian refugees it is currently housing back into the SDF-held areas it is now overtaking. That 83% of these Arabs never lived in the areas they are to be forcibly resettled in, begs the question of whose homes and lands will they be overtaking?

Turkey claims to be fighting a terrorist group and wanting to clean their border area of terrorists, but the pictures coming out of northeast Syria instead make Turkey look like the terrorist aggressor. Countless photos and videos, many of them validated, circulate of Syrian civilians lying bloodied and dead on the ground while their family members wail unconsolably. Hevrin Khalaf, a female, and the Secretary-General of the pro-Kurdish Future Syria Party, is reported to have been dragged from her car and assassinated by Turkish-hired thugs who said while filming her corpse, “this is the corpse of pigs.” Likewise, video footage of bearded mercenary soldiers backed by the Turks, shooting their Kurdish captives while calling them “kufar scum” (unbelievers) are said by U.S. forces to appear authentic. If so, these actions are war crimes.

These bearded assassins, backed by Turkey are likely the same unemployed ISIS, al Nusra, and other former jihadists still happy to kill in the name of Allah, who Turkey used to clear Afrin in 2018. Indeed, they have shown a brutality akin to their mother groups, some even shouting ISIS slogans as they kill, such as “Baqiya wa tatamadad!” meaning we (ISIS) will remain forever, and expand.

That Turkey would use former ISIS cadres to fight the Kurds is no surprise, given they worked closely with ISIS to try to quell the Kurds early on in the Syrian conflicts and continue to see their interests in destroying Kurdish power to lie with militant jihadist and Islamist groups. An ISIS emir that ICSVE interviewed in 2019 went into great detail about his work on behalf of ISIS, about how he negotiated with the Turkish MIT and military regarding border entry for the 40,000+ foreign fighters that streamed across Turkey into ISIS-controlled areas of Syria, agreements for sending wounded ISIS fighters back into Turkey for medical treatment, supplying water for the Tabqa dam to provide electrical power for ISIS, and so on. According to this emir, even then, Turkey was insisting on a buffer security zone. Now it appears they will go to any lengths to get it.

Meanwhile, General Mazloum Kobani Abdi told U.S. Ambassador William Roebuck, the U.S. Deputy Special Envoy to the Global Coalition to Defeat ISIS “You have given up on us. You are leaving us to be slaughtered.” He also asked in confused despair how the U.S. could also insist that the Kurds not turn to others, like the Russians for support, effectively boxing them in for slaughter.

When ISIS foolishly attacked Kobani in 2014, the Kurdish People’s Protection Units (YPG) and Women’s Protection Units (YPJ) rose up and fought valiantly and since 2015, they fought with U.S. military backing, to defeat ISIS.  They have been our “boots on the ground”, sustaining most of the casualties and doing all the heavy lifting in defeating a global foe. While U.S. forces lost less than 20 troops after they aligned with the Kurds to fight ISIS in Syria, our hardy allies lost 11,000 male and female brave fighters who faced down this global foe.

Indeed, while ISIS was an active force on the ground in Syria, it external emni (intelligence arm), threatened the globe, mounting and inciting attacks in many major cities from New York, to Brussels (where two Americans were killed), to Paris, Nice, Stockholm, London and Istanbul to name but a few.

In serving as our “boots on the ground” forces for the territorial defeat of ISIS, and continuing to battle the remnants of ISIS, the Kurds saved, and continue to save, countless Americans and Westerners from being slaughtered by a heinous force willing to attack, anywhere, at any time.

Yet their current aggressor, Turkey, calls these Kurds terrorists. That picking up arms against ISIS gave them the sudden opportunity to rule a considerable swathe of Syrian land that they had liberated from ISIS is no one’s fault, except those who supported ISIS in the first place—Turkish government officials among them. No doubt, the Kurds once in power, made some mistakes, but it is notable how quickly they moved to incorporating minorities into their ranks and transitioning to the Syrian Democratic Forces (SDF) who have had a good record of building a grassroots democracy amidst the ashes of war. That their majority Kurdish leadership may have long-term aspirations to one day become a fully independent Kurdish state should be no surprise, but that they were acquiescing to all U.S. demands upon them to remain within Syria and negotiate some kind of governance agreement with Assad also needs to be noted. The trouble in that regard, is Assad wants to appoint top-down leaders in the area and thereby destroy the grass-roots nature of the Kurdish democracy building. From a position of strength and good governance, with U.S. backing behind them, the SDF had a chance of becoming a real island of democracy, perhaps even one day spreading such, within the Syrian state.

In the meantime, with ISIS defeated territorially, ISIS is still far from total defeat. In recent months ISIS has been attacking on a weekly basis in both Syria and Iraq, and the SDF were busy rounding up ISIS sleeper cells while also holding more than 70,000 ISIS prisoners and their family members, thousands of which are from European and Western countries who have refused to repatriate and bring them home to justice.

Now, amidst the chaos unleashed by Turkey, up to 800 ISIS cadres have escaped when their prison was shelled, with hundreds more ISIS women and children escaping from their bombed and burning camps. Where they will run to amidst the chaos is uncertain, but Turkey and beyond, is certainly a possibility given that when cornered in Hajin, and later Baghouz, SDF leaders told ICSVE that ISIS leaders were asking to be bussed out of Syria into Turkey—presumably believing they would be welcomed into a country that had helped them in the past.

500 of the worse ISIS cadres are said to have been transferred by U.S. forces from Syria, into Iraq, and possibly more will befall the same fate. For those of us who still believe in human rights and rule of law, even when applied to ISIS cadres, it’s unfortunate that in Iraq these prisoners—many of them Westerners—can expect forced confessions, hurried court proceedings and almost certainly sentence of life imprisonment, or death, based on very little, if any, evidence presented against them. Whereas, in our ISIS interviews conducted in SDF territory, with 100 of the ISIS foreign terrorist fighters, the prisoners stated that they were not being subjected to torture and were fairly treated by the SDF. Likewise, the SDF was working patiently, including in efforts with ICSVE, to gather testimonies and data to prod Western countries into action that have been reluctant to take their ISIS citizens home for prosecution.

While the SDF could only do its important work with U.S. support, this support was not costing us much. Few troops were deployed on the ground and our air support was operating out of Iraq, where it is likely the U.S. forces will stay for some time. That we should not involve ourselves in endless wars or that the troops need to come home is something most agree with, but how and when is also of great importance.

Any U.S. withdrawal of support for the SDF should only occur because they are no longer serving our interests and must take place in a planful and secure manner without allowing for an all-out slaughter of civilians or of the allied forces who, by fighting ISIS, saved Americans countless lives.

Given that the Kurds sacrificed greatly to defeat ISIS territorially on the ground, and when in power, began at once to build one of the only democracies in the middle east that is respecting minority rights and following Western rule of law, while being surrounded by dictatorial and corrupt regimes, it seems we should have continued to give them our full support. Instead Trump has unleashed Turkish forces on a group that Turkey universally treats as terrorists and is willing to violently displace and kill. This sudden betrayal of our loyal allies is a matter that needs to be quickly resolved in Washington, D.C.

Our American ideals, and our reputation as stalwart and reliable allies, are at stake right now, and this disastrous decision needs to be reversed immediately.

Reference for this Article: Speckhard, Anne (October 13, 2019) Who are the Real Terrorists in North East Syria? ICSVE Brief Reports.

Anne Speckhard, Ph.D., is Director of the International Center for the Study of Violent Extremism (ICSVE) and serves as an Adjunct Associate Professor of Psychiatry at Georgetown University School of Medicine. She has interviewed over 600 terrorists, their family members and supporters in various parts of the world including in Western Europe, the Balkans, Central Asia, the Former Soviet Union and the Middle East. In the past two years, she and ICSVE staff have been collecting interviews (n=196) with ISIS defectors, returnees and prisoners, studying their trajectories into and out of terrorism, their experiences inside ISIS, as well as developing counter narratives from these interviews. She has also been training key stakeholders in law enforcement, intelligence, educators, and other countering violent extremism professionals on the use of counter-narrative messaging materials produced by ICSVE both locally and internationally as well as studying the use of children as violent actors by groups such as ISIS and consulting on how to rehabilitate them. In 2007, she was responsible for designing the psychological and Islamic challenge aspects of the Detainee Rehabilitation Program in Iraq to be applied to 20,000 + detainees and 800 juveniles. She is a sought after counterterrorism expert and has consulted to NATO, OSCE, foreign governments and to the U.S. Senate & House, Departments of State, Defense, Justice, Homeland Security, Health & Human Services, CIA and FBI and CNN, BBC, NPR, Fox News, MSNBC, CTV, and in Time, The New York Times, The Washington Post, London Times and many other publications. She regularly speaks and publishes on the topics of the psychology of radicalization and terrorism and is the author of several books, including Talking to Terrorists, Bride of ISIS, Undercover Jihadi and ISIS Defectors: Inside Stories of the Terrorist Caliphate. Her publications are found here: https://georgetown.academia.edu/AnneSpeckhard and on the ICSVE website http://www.icsve.org Follow @AnneSpeckhard