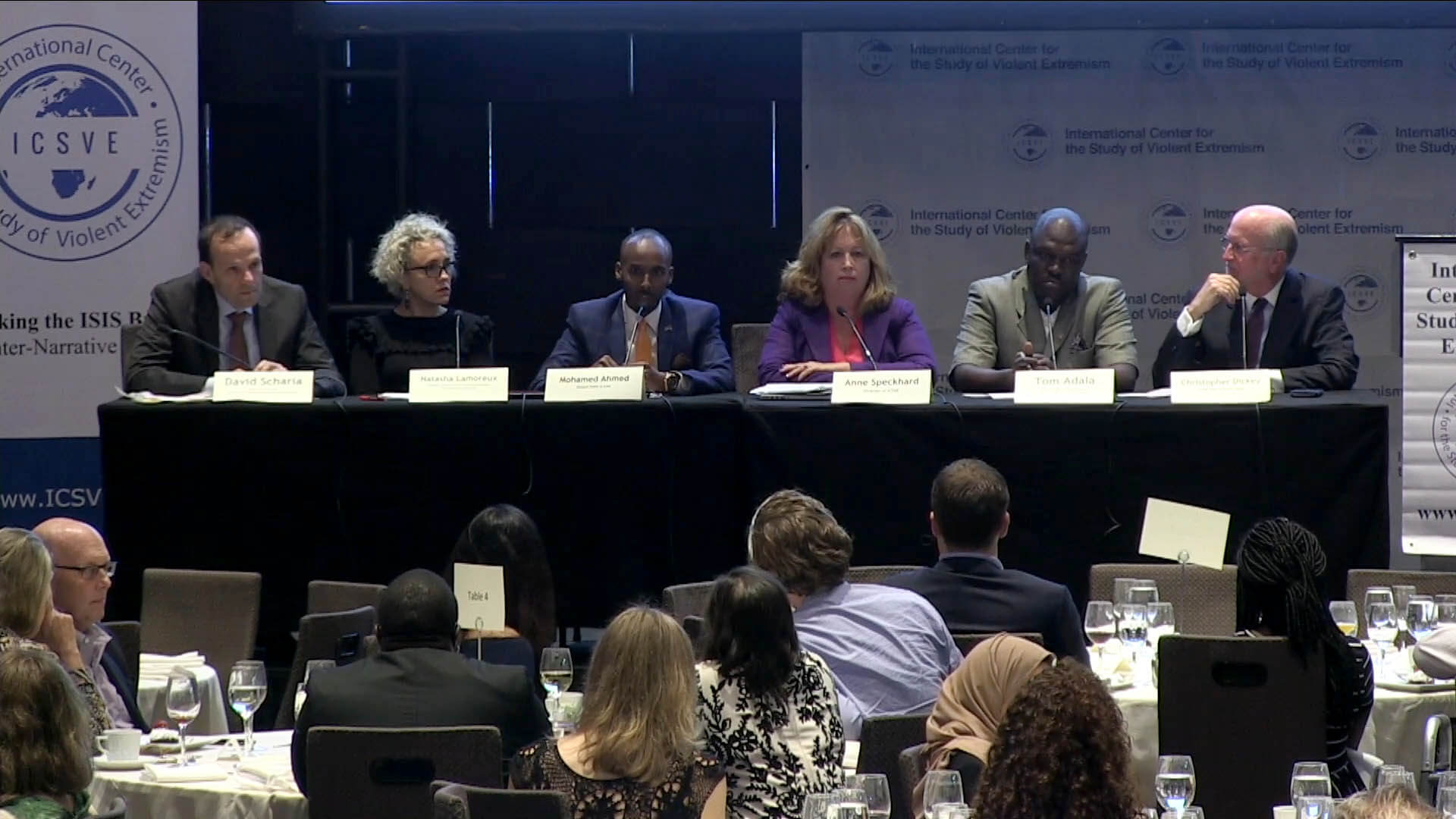 Video recording of the live streaming of our ICSVE event from the Grand Hyatt Hotel, New York, on Sept 20th, 2018 is here:

Agenda for the Event:

Introductions and Presiding over the Panel –

Her Excellency, Alya bint Ahmed Al Thani, Permanent Representative of Qatar to the United Nations – Brief Opening Remarks – focusing on the importance of soft power approaches and the need to include gender-based knowledge.

Natasha Lamoreux – Coordinator, Community of Practice and Outreach Women, Peace and Security at UN Women– Discussion of a gendered approach to preventing and countering violent extremism and introduction of the new UN Preventing and Countering Violent Extremism Curriculum in Europe and Central Asia – Download Presentation

Tom Adala – Head of Strategy, Innovation & Research, National Counter Terrorism Centre (Kenya) – Assessment of ISIS and al Shabaab activity in Kenya and the region with presentation of an ICSVE counter narrative video from the ICSVE-NCTC partnership as well as a report from the FB campaign conducted with these videos in Kenya. – Download Presentation

This panel will provide a forum for discussing the issues involved in returning foreign fighters as well as unveiling new and upcoming CVE tools including the ICSVE Breaking the ISIS Brand Project Counter Narrative Videos and new curriculums for Countering Violent Extremism (CVE).

While terrorism and violent extremism are complex issues requiring multi-level government and non-government interventions, ICSVE is dedicated to producing effective soft-power responses. Counter-narratives are increasingly being used to respond to and counteract the vast amount of online propaganda generated by terrorists and violent extremist groups like ISIS. Many government bodies, including in the UK, the Netherlands, Albania, Belgium, Kenya, Iraq, Syria, Kyrgyzstan and Malaysia have partnered with ICSVE in this regard, as well as major international organizations, such as the Organization for Security and Cooperation in Europe (OSCE) and the United Nations (UN) are supportive of such efforts and are increasingly implementing the use of counter-narratives in their respective Countering Violent Extremism (CVE) strategies.

Likewise, with the emergence of the so-called Islamic State (ISIL/Daesh) in Iraq and Syria, much of the public attention has been focused on males and male combatants, while, generally speaking, the roles of women in violent extremism have been overlooked. Recently, there has been an increasing awareness about women as active and invaluable participants in extremist groups.

One way of doing so is to provide the necessary tools to government officials, civil society organizations, and others interested in countering women’s involvement in violent extremist groups to enhance gender responsive P/CVE. UN Women will  unveil at this event, their new CVE training manual entitled: Women in Preventing and Countering Violent Extremism in Europe and Central Asia written by Anne Speckhard and Ardian Shajkovci of the International Center for the Study of Violent Extremism (ICSVE). The UN Women training manual offers information on the effect of radicalization and violent extremism on women and young girls, as well as suggestions on how to more proactively and effectively engage in prevention, response, and rehabilitation efforts of women engaged in violent extremism.

Country partnerships with ICSVE will also be featured as well as viewing of a few of the counter narrative videos that were produced as a result.

Ambassador Extraordinary and PlenipotentiaryAlya bint Ahmed Al Thani, is thePermanent Representative of the State of Qatar to the UN in New York

Alya Ahmed bin Saif Al-Thani was appointed the Permanent Representative of the State of Qatar to the United Nations in New York in October 2013. An internationally recognized leader on human rights, social justice, sustainable development and conflict prevention – she is also well known for her fight against impunity and the quest for peace, justice and accountability. She has authored and facilitated numerous groundbreaking General Assembly Resolutions on education in emergencies, autism, natural disaster response, war crimes and impunity among others. She was the Chairperson of the Fiftieth Session of the Commission on Population and Development (2017); Co-facilitator on the preparations for the high-level meeting to appraise the Global Plan of Action to Combat Trafficking in Persons (2017), and she is the co-facilitator to lead intergovernmental consultations on the review of Resolution 68/1, regarding reform of ECOSOC (2018).

Ambassador Alya Ahmed bin Saif Al-Thani is the recipient of numerous prestigious awards. In 2013, she was nominated a Young Global Leader to improve the State of the World by the World Economic Forum.

She holds a M.A. in International Studies and Diplomacy from the University of London’s School of Oriental and African Studies

Chris’s books include the classic With the Contras: A Reporter in the Wilds of Nicaragua (Simon & Schuster, 1986); Expats: Travels from Tripoli to Tehran (Atlantic Monthly Press, 1990); Innocent Blood: A Novel (Simon & Schuster, 1997), and Summer of Deliverance: A Memoir of Father and Son (Simon & Schuster, 1998); The Sleeper, a sequel to Innocent Blood, was published by Simon & Schuster in September 2004. Securing the City: Inside America’s Best Counterterror Force — the NYPD, published in 2009 and chosen by The New York Times as one of the notable books of the year. Chris’s eye-opening history of an intrepid diplomat in the epicenter of secession, Our Man in Charleston: Britain’s Secret Agent in the Civil War South, published in 2015, is a New York Times best seller.

Chris has also written for Foreign Affairs, Vanity Fair, The New Yorker, Wired, Rolling Stone, The New York Review of Books, The New York Times Book Review, and The New Republic, among other publications. He is a frequent commentator on BBC World, France 24, Al Jazeera English, CNN, MSNBC and National Public Radio, as well as other television and radio networks.

Anne Speckhard, Ph.D. is the Director of the International Center for the Study of Violent Extremism (ICSVE) and serves as an Adjunct Associate Professor of Psychiatry at Georgetown University School of Medicine and in the Security Studies Department. She has interviewed over 600 terrorists, their family members and supporters in various parts of the world including in Western Europe, the Balkans, Central Asia, the Former Soviet Union and the Middle East. In the past two years, she and ICSVE staff have been collecting interviews (n=94) with ISIS defectors, returnees and prisoners, and (n=10) with al Shabaab, studying their trajectories into and out of terrorism, their experiences inside ISIS, as well as developing the Breaking the ISIS Brand Counter Narrative Projectmaterials from these interviews.

Dr. Speckhard has also been training key stakeholders in law enforcement, intelligence, educators, and other countering violent extremism professionals on the use of counter-narrative messaging materials produced by ICSVE both locally and internationally as well as studying the use of children as violent actors by groups such as ISIS and consulting on how to rehabilitate them. In 2007, she was responsible for designing the psychological and Islamic challenge aspects of the Detainee Rehabilitation Program in Iraq to be applied to 20,000 + detainees and 800 juveniles. She is a sought after counterterrorism experts and has consulted to NATO, OSCE, foreign governments and to the U.S. Senate & House, Departments of State, Defense, Justice, Homeland Security, Health & Human Services, CIA and FBI and CNN, BBC, NPR, Fox News, MSNBC, CTV, and in Time, The New York Times, The Washington Post, London Times and many other publications. She regularly speaks and publishes on the topics of the psychology of radicalization and terrorism and is the author of several books, including Talking to Terrorists, Bride of ISIS, Undercover Jihadi and ISIS Defectors: Inside Stories of the Terrorist Caliphate.Her publications are found here: https://georgetown.academia.edu/AnneSpeckhardWebsite: and on the ICSVE website https://www.icsve.org

Natasha Lamoreux – is the Coordination Specialist, Peace & Security at UN Women is a 2012 graduate of New York University’s Center for Global Affairs (CGA) where she earned a Master’s of Science in Human Rights, with focus on women’s human rights and human security, gender equality, and empowerment and engagement of women within marginalized communities. Natasha is currently Coordination Specialist with UN Women’s Peace and Security team, where she leads the Community of Practice on Women, Peace and Security and contributes to communications and outreach efforts, as well as supports the Preventing/Countering Violent Extremism (P/CVE) portfolio.

Mohamed Ahmed – Research Fellow ICSVE – was born in Mogadishu, Somalia, Mohamed moved to San Diego as a refugee in 1995. Mohamed graduated and studied International Security and Conflict Resolution at San Diego State University where he obtained his Bachelors of Arts and Sciences in 2013. Mohamed also earned his Master’s in Postsecondary Educational Leadership from San Diego State University and his currently pursuing his doctorate in Education.

Mohamed works with the International Center for the Study of Violent Extremism as a Research Fellow creating safe spaces and focus-testing the Breaking the ISIS Brand Counter Narrative videos both as prevention and intervention tools. He is also the Co-Founder and Chief Executive Officer of Horsaid Institute for Community Development, a community based non-profit organization that works to strengthen the educational and life opportunities of young men and women in the East African Community both locally and internationally. Mohamed worked from local, national, and international organizations allowing him to become a strong visionary leader. Under his leadership, he has led major humanitarian programs in the Horn of Africa responding to famine relief and building a primary school in his home country of Somali providing access to education for more than 300 students.

Furthermore, Mohamed was named as Community Engagement and Special Assistant to the Dean of Students at San Diego State University where he leads the universities development and implementation of a strategic plan for community outreach to underserved, underrepresented student populations, and community at large in consultation with the Division of Student Affairs, Center for Intercultural Relations, Academic Departments and community partners including U.S. Attorney’s Office, City of San Diego, and other local and federal agencies.

Mohamed also served as the Senior Community Engagement Coordinator for the Department of Homeland Security – Office of Community Partnerships where he led the development and implementation of the strategic framework to counter violent extremism in the San Diego region on behalf of the federal government. Furthermore, Mohamed is the Chairman of the San Diego Coalition for Anti-Radicalization Education and Support (SD-CARES), a coalition that represents a diverse array of non-profit organizations dedicated to reducing radicalism in the San Diego region through comprehensive intervention programs that sustain safe and healthy communities.

Mohamed is also appointed by the Mayor of San Diego as a commissioner on the cities Commission for Gang Prevention and Intervention, where he works to create policy recommendations to the Mayor, City Council, and City Manager on issues of gang prevention, intervention, diversion, and suppression methods; identifying local, state, and federal funding sources; and identifying national best practice efforts. Mohamed is also a graduate of the Fred J. Hansen Institute for International Leadership and Cooperation where he represented the United States and Somalia playing an active role in international non-governmental organizations and efforts to build and improve democracies while working with international partners on security, climate change, human rights, and many other pressing global challenges.

Residence at Columbia Law School and a Fellow at NYU Center for Global Affairs.