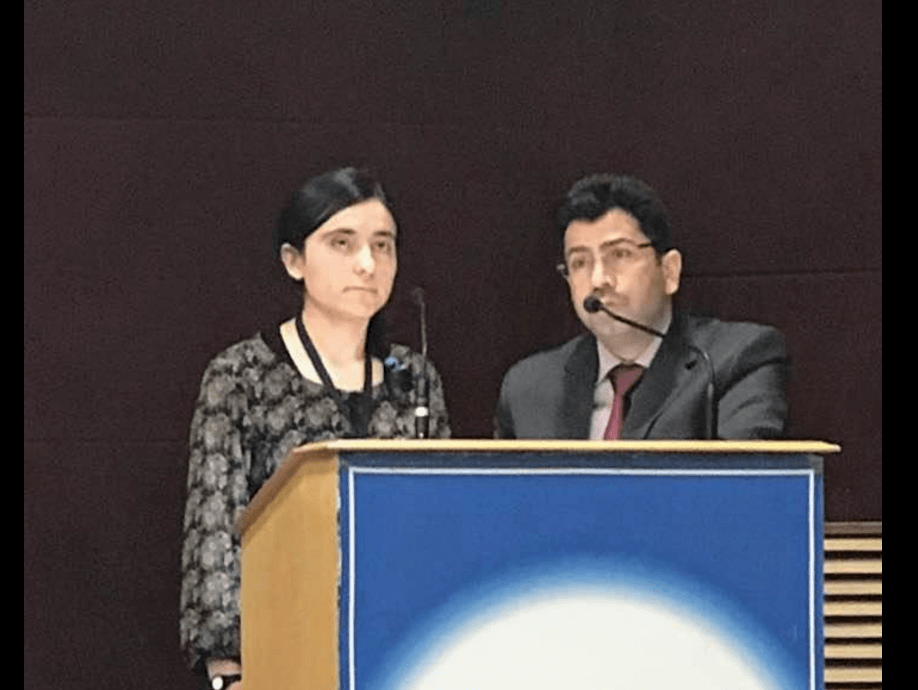 On International Women’s Day it seems important to recognize strong women and the unique characteristics of women to play important roles in defeating terrorism. In the past days, taking part in the Institute for Defense Studies and Analysis Combating Terrorism Conference in New Delhi, India, I had the opportunity to meet and listen to the story of Lamia Haji Bashar, a Yazidi girl who at age 15 was captured with her entire family by ISIS. Lamia ended as a sex slave of ISIS, “owned” and abused by five different men. She finally escaped but not without paying a high price—the two women she was with were exploded on a landmine and she lost one of her eyes and was disfigured by the explosion. Yet she remains an extremely beautiful young woman speaking out in courage about her ordeal of rape and enslavement, speaking up for the thousands of Yezidi, Sunni and Shia girls and boys still in captivity and whose lives have been derailed by the extreme brutality of ISIS.

Women are both victims and actors in terrorism and unfortunately play a significant role in ISIS—even cooperating in the enslavement of other women, who they dehumanize and also abuse. We know that terrorism tends to be a male-dominated profession, yet groups like ISIS have made a very strong call to women to travel to Syria and Iraq to join their ranks. Many find this incomprehensible, yet when we listen to actual terrorists tell their stories we find how they were seduced and how we might better protect women from this face-to-face and Internet seduction that is taking place all over the world.

In our Breaking the ISIS Brand—the ISIS Defectors Interviews Project we were privileged to listen to (with Dr. Yayla and Dr. Shajkovci) to female and male defectors and returnees who described the roles of women in ISIS. Women (and men), who join ISIS are promised purpose, significance, dignity, prosperity and important roles in the organization and the chance to build an alternative to the existing world order which is sold as a utopian future. While its hard for Westerners to understand why women would join such a misogynist organization, we must grasp the hard facts that foreign women who join go to live under the so-called Islamic Caliphate do so for a multitude of reasons: to embrace traditional lifestyles; to follow what they believe is the “true” Islam; and to fight back against what they have come to believe are global injustices, as claimed in the terrorist narrative that Muslims, Islamic lands and even Islam itself is under attack by the West. They also go for adventure; romance; believing that they will be given significant and purposeful roles and even prosperity—including homes and cars. A Belgian female defector told me a few weeks ago that she was even promised diamonds and nurse’s training if she married someone she’d never met and traveled to Syria. Of course neither materialized.

According to defectors we have spoken to, women who arrive to ISIS find that if married they are separated from their husbands who immediately go to shariah and military training. If unmarried, they are offered marriage, and some do receive beautiful homes. They are also immediately invited to join the ISIS hisbah to enforce the ISIS version of shariah. If they accept this role, they are handed a Kalisnikov and suddenly empowered beyond what they have likely experienced at home. They answer to almost no one—which may be an intoxicating experience for them. Women arrivals to ISIS are also invited to become Internet seducers of men and women to come to the “Caliphate”. In India I learned from counter-terrorism police that on the ground recruiters are rare, but women reaching out over the Internet are extremely active, successfully seducing men into travel to Syria. Our defectors told us that there is a house in Raqqa that ISIS women report to daily to carry out this work. Of course over time ISIS women find that if their husbands are killed they are coerced into marriage after marriage and that shariah rules greatly limit their freedoms. But if they’ve drank deeply of the ISIS poison they long for “martyrdom” and believe they are building something beautiful, despite the brutality they engage in to further it. And some come to embrace brutality—turned into sadists by the organization that poisons them day by day.

When women become disillusioned in ISIS we find that they return at a much lower rate than men. In Kosovo we found the female to male return rate to be one to ten. This means that women either don’t want to return—which is unlikely given the horrific stories told by women who did manage to escape, including those women who were slaves of ISIS like Lamia. What is likely operating in the low escape/return rate is that women don’t have access to the money needed to pay smugglers, fear rapes if they deal with a smuggler alone, and also don’t have the same freedom of movement without a male cadre’s assistance to escape. They also often are handicapped in escaping because they have children in tow or are pregnant. Likewise, some that have managed to contact their their embassies find them ill-equipped to receive and give passports to children they have borne there, even asking them to bring their husbands to the embassy or consulate to agree to the passport and travel. This is tragic and we need to find ways to rescue women out of the group. One European woman that escaped ISIS pregnant told me that her family received a text finally acquiescing to her desire to leave, with ISIS saying she could leave but not before she had her baby, nursed it and left her child behind, because as they claimed, “The baby belongs to us.”

Now that ISIS is losing its territory, we will see foreign fighters and ISIS cadres migrating back to their own countries and to other hot spots around the world, perhaps dragging unwilling women along with them. We will also see that the military can defeat armed cadres but are less effective in defeating a powerful idea—a poison that these fighters will continue to spread into the places where they land—prisons, their home countries and elsewhere. And the Internet presence of groups like ISIS will persist. Women returnees, we find are often not imprisoned, and we need to learn if we should be watching them carefully or if we can make use of them to raise their voices against ISIS.

In this regard we can also look to women who never resonated to terrorist groups to be a powerful part of the solution. Women who are trained and empowered and have trusting relationships with local authorities can be a powerful part of the solution in alerting their authorities of returned foreign fighters and what they are up to. They can also be empowered to be active in their families and communities in prevention, intervention, rehabilitation and reintegration roles, to spread the truth about groups like ISIS—that they are neither Islamic, nor able to deliver any semblance of a utopian future. Any counter-narratives that are developed, including the ones we have created at the International Center for the Study of Violent Extremism (ICSVE) raising ISIS defectors voices to denounce the group they once served, can be spread by women active on the Internet. In the same ways that ISIS uses women to seduce individuals into the group, they can also be voices on the Internet to prevent and intervene. Women can also be active in local schools and community centers and in the lives of the men and women over whom they hold influence. Women are often well aware of the grievances and vulnerabilities that terrorist groups tap into and use to seduce vulnerable individuals into their ranks and can be protective to help these same vulnerables understand that terrorism is not the best answer to addressing these grievances and direct them to other better activities. They can also protect their own children to be inoculated against terrorist seduction. But they need training and tools to play these roles.

On International Women’s Day we need to honor women like Lamia who have the courage to speak out. And we need to remember that women are our hidden and untapped resource in fighting violent extremism and we must find ways to empower and activate them.

Anne Speckhard, Ph.D. is Adjunct Associate Professor of Psychiatry at Georgetown University in the School of Medicine and Director of the International Center for the Study of Violent Extremism (ICSVE). She is also the author of Talking to Terrorists, Bride of ISIS and coauthor of ISIS Defectors: Inside Stories of the Terrorist Caliphate; Undercover Jihadi; and Warrior Princess. Dr. Speckhard has interviewed nearly 500 terrorists, their family members and supporters in various parts of the world including Gaza, West Bank, Chechnya, Iraq, Jordan, Turkey and many countries in Europe. In 2007, she was responsible for designing the psychological and Islamic challenge aspects of the Detainee Rehabilitation Program in Iraq to be applied to 20,000 + detainees and 800 juveniles. She is a sought after counter-terrorism expert and has consulted to NATO, OSCE, foreign governments and to the U.S. Senate & House, Departments of State, Defense, Justice, Homeland Security, Health & Human Services, CIA and FBI and appeared for CNN, BBC, NPR, Fox News, MSNBC, CTV, and in Time, The New York Times, The Washington Post, London Times and many other publications.