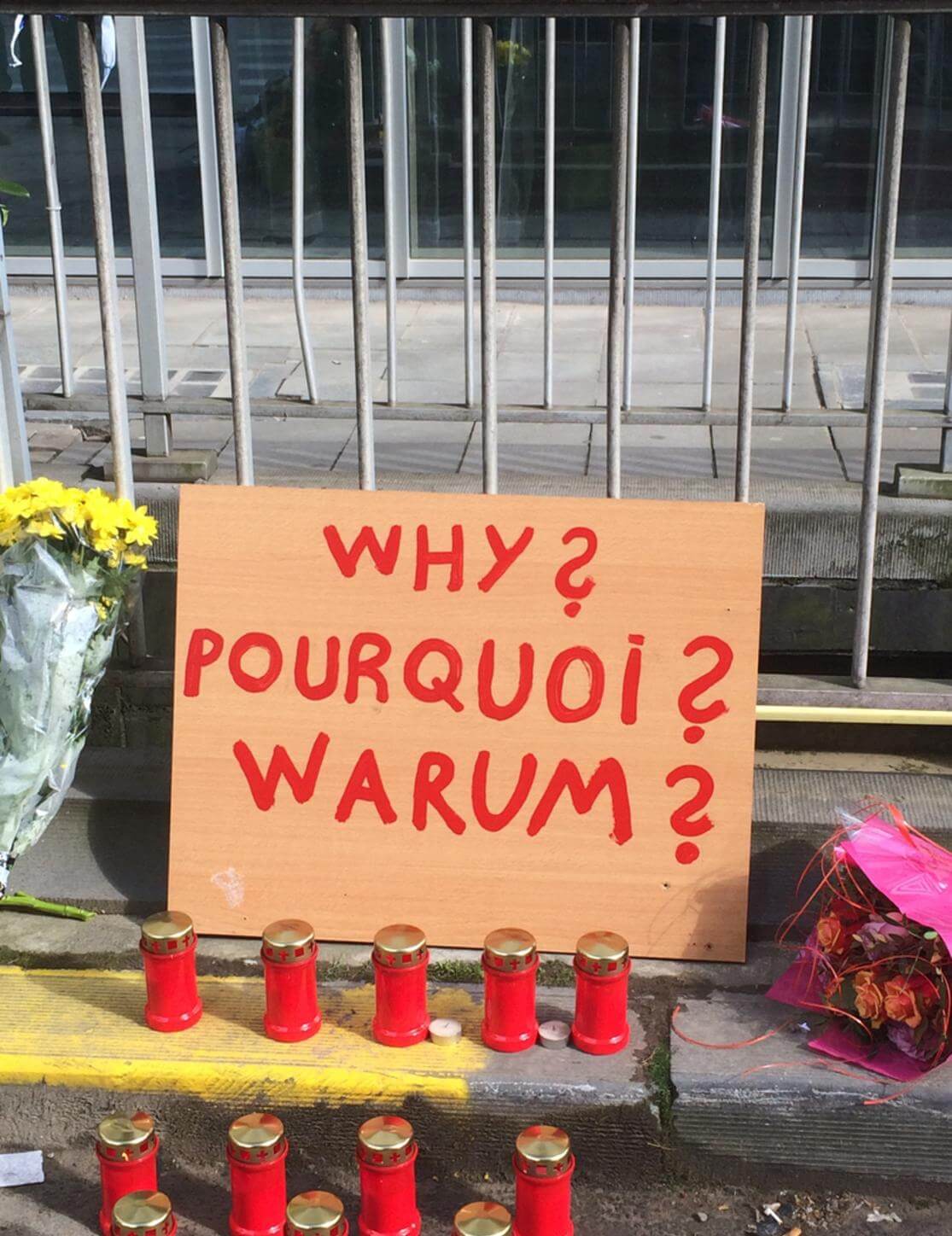 Do the Terrorists Who Blow Themselves Up Even Know Why they are Doing it?

When ISIS attacks—such as those just witnessed in Paris, and now Brussels—occur with such horrific violence the prevailing questions pervading the immediate surrounds and also circling the globe, concern “WHY?”  Indeed a hand-written sign left outside the Maelbeek metro station (where a suicide bomber killed twenty and injured over one hundred) that I photographed yesterday, as I too walked around Brussels numbed by the devastation, poignantly asks that very question in three languages: “Why? Pourquoi? Warum?”

If we interrogate the writings of ISIS and al-Qaeda ideologues, they have made it abundantly clear— that the grand plans of al-Qaeda, and now ISIS, for Europe and the West are to “bring division to the world and destroy the Grayzone everywhere.”  By attacking in the West, the terrorist leaders wish to capitalize on social divisions in Europe and elsewhere, making it impossible for Muslims to live side-by-side with their neighbors. As one of my Belgian friends warns—“We are only seeing the beginning of micro-civil wars.” Similarly in the online magazine, Dabiq, ISIS taunts, “The world today is divided. Bush spoke the truth when he said, ‘Either you are with us or you are with the terrorists,’ with the actual ‘terrorist’ being the Western Crusaders.”

ISIS, and al Qaeda before it, wished to bring the west to their knees by bleeding them slowly in wars of attrition and costing them a lot of money in fighting terrorism.  As Daveed Gartenstein-Ross writes: “following the November Paris attacks, ISIS released an infographic boasting that its slaughter on the streets of Paris would force Belgium ‘to strengthen its security measures … which will cost them tens of millions of dollars.’ Moreover, as Gartenstein-Ross states: “the group claimed, ‘the intensified security measures and the general state of unease will cost Europe in general and France in specific tends of billions of dollars due to the resulting decrease in tourism, delayed flights, and restrictions on freedom of movement and travel between European countries.’”

These terrorist leaders are strategic and have long-term plans built on years of thinking how to harm us.

But when it comes to the small actors—those second generation immigrant descent Muslims and disaffected converts from Belgium, France and other European countries who give their lives for ISIS, while killing others in attacks, like just witnessed in Belgium, one must ask—do they really understand, and align with, the grand plans of their leaders—or are their motivations different from their ISIS and al Qaeda ideologues and leaders?  In that regard Nick Kristof tweeted this today and it applies to not only Salah Abdeslam but many of the others involved as well.

What I have learned from interviewing nearly five hundred terrorists and extremists (or in the case of dead suicide terrorists, their family members, close associates and hostages) is that it usually take four things to make a terrorist.  First, there is nearly always a group with a political agenda that has the capabilities that most individuals lack—to make bombs, organize terror cells and to plot out attacks. Most individuals cannot do that on  their own and now we have seen how well-financed and organized ISIS is capable of working inside Europe. Second, there’s an ideology for terrorism—which is always wrong—but which yet attempts to justify targeting innocents in terror attacks in behalf of the group’s cause.  In the case of ISIS, and al-Qaeda before it, the narrative is of defensive jihad—arguing that Islam and Islamic people and lands are under attack. In Europe they try to catch the disaffected by telling them you don’t belong and are not accepted here—but we can offer you much more. Likewise, ISIS has added the cosmic and apocalyptic elements, claiming that the “caliphate” has been established and that in the “the end times” anything goes. “Victory or paradise—you win either way,” they claim.  The third ingredient in this lethal cocktail of terrorism is social support—which nowadays for groups like ISIS is no longer necessary to be face to face.  Social support is as available as one’s phone or any other contact with the Internet and increasingly intimate via text, chat, video calls etc. Last, and perhaps most important in the four ingredients for making a terrorist is the vulnerabilities and motivations on the individual level—what makes the person joining resonate to the group and its message—and this alongside the existence of terror groups and their ideologies can give us big clues as to the why?

On the individual level, I’ve identified at least fifty vulnerabilities.  These vulnerabilities can vary from a simple desire to belong; a desire for personal significance (which can be measured as simply as how many followers one has on their social media account which greatly increases if one follows ISIS); purpose; employment; a desire to earn Paradise through “martyrdom,” or using “martyrdom” as a means of cleansing oneself, etc.  For young sex-starved men having a hard time getting employed and thus having difficulty being able to date and marry, there is also the ISIS allure of “sex now” as in when girls give themselves to would be jihadis or ISIS promises them wives and sex slaves; as well as “sex later” in paradise with the “houris.”

Tonight when talking in Brussels to a Belgian of Moroccan descent, he told me that discrimination and marginalization against his community are real here—as I was already well aware—and that it’s been going on far longer than before 9-11. “They want honor,” he explained.  “They are nothing,” he sneered speaking of the unemployed punks in his neighborhood who resonate to the calls of terrorist recruiters, “but they want to be somebody, a hero, someone that is talked about and important.”

Alain Grignard, a longtime and highly respected Belgian counter-terrorism expert who had been following the metamorphosis of militant jihadi terrorist groups over the decades in Belgium also makes the point that most Belgian jihadists today are not attracted to groups like ISIS as a result of deep engagement with jihadist ideology as was the case when al-Qaeda membership required building up your credibility with the group and a long ideological indoctrination. Instead, Grignard points out that now, the youth who are already anti-social and violent, who have been involved in petty criminality including drug dealing and who are basically from street gangs—find legitimization for their violent street credo in ISIS. And, I would add, they also find identity, belonging, purpose and significance, adventure, fun and sometimes even also sexual rewards.

So we see that the “why” at least on the individual level is not that they are necessarily “true believers” or even understand the group’s long-term goals, but are instead individuals whose immediate needs are being met by a terrorist organization.

For those who feel that society is failing them, terrorist groups can also provide an outlet for frustration and despair and give a sense of euphoria in striking out at and attempting to destroy what is not working for them. The anarchists in Greece capitalized on the anger over corruption in their society talking their adherents into believing it better to destroy society than fix it—that only after it was completely torn down, could something better be rebuilt.  ISIS does the same, capturing the ennui and frustration in many of today’s European immigrant descent youth—many who are increasingly frustrated and underemployed in the face of the economic crises.

As Scott Atran writes, “In the absence of a devout alternative of passion and significance, many who join ISIS seem to say: ‘Better an end to suffering the status quo, with hope for something better, whatever suffering and horror it takes.’ That, of course, is the heart of the apocalyptic mindset; that to save this world it may be necessary to destroy it, and postpone hope to the next life.”

So we must, in figuring out how to tackle this terrorist problem remember that the individual motivations for taking part in ISIS inspired or even commanded terrorism may be quite different than the goals of the terror organization itself.  And sometimes the lethal actors in a terror event do not even really care about or understand exactly what part of the “grand design” they are carrying out.  They are simply playing out their own needs in behalf of an organization that has managed to entangle them into terrorism and put them on their lethal paths. To stop them we must find ways to meet needs of lost members of society in other more productive ways and to redirect them back into society.  Let’s hope in Europe and in the West we can get better at that before ISIS blows us all back to the past centuries.

Anne Speckhard, Ph.D. : is Adjunct Associate Professor of Psychiatry at Georgetown University in the School of Medicine and is Director of the International Center for the Study of Violent Extremism (ICSVE) and is a nonresident Fellow of Trends. She is also the author of Talking to Terrorists and coauthor of Undercover Jihadi. Her newly released book, inspired by the true story of an American girl seduced over the Internet into ISIS, is Bride of ISIS. Dr. Speckhard has interviewed nearly five hundred terrorists, their family members and supporters in various parts of the world including Gaza, the West Bank, Chechnya, Iraq, Jordan and many countries in Europe. She was responsible for designing the psychological and Islamic challenge aspects of the Detainee Rehabilitation Program in Iraq to be applied to twenty thousand detainees and eight hundred juveniles.  She is currently running the ISIS Defectors Interview Project with Dr. Ahmet Yayla at ICSVE. Personal website: www.AnneSpeckhard.com

Reference for this article is: Reference for this paper: Speckhard, Anne (March 26, 2016) Why? Pourquoi? Warum? Do the Terrorists Who Blow Themselves Up Even Know Why they are Doing it?ICSVE Brief Report https://www.icsve.org/why–do-the-terrorists-who-blow-themselves-up-even-know-why-they-are-doing-it-.html