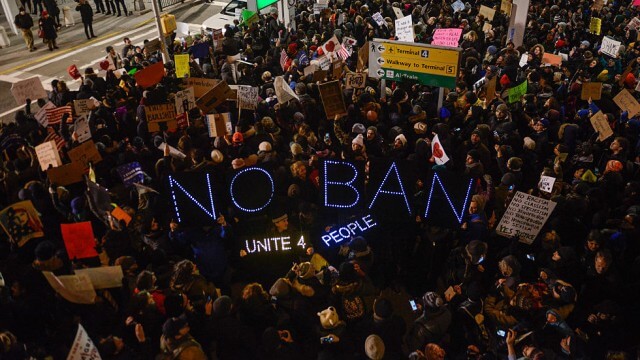 as published in The Hill

My neighbor is a Syrian refugee. Frankly, he is the profile of the Syrian no one wants: male, of fighting age, Sunni. But he is anything but dangerous — in fact he is overwhelmed with gratitude to be living in peace, finally. He teaches editing to Voice of America staff and in his free time, he makes videos of Syrian heroes fighting for democratic values — regular people suddenly forced by an authoritarian regime to defend basic freedoms and their families. His mother is a psychologist and Skypes with Syrians who didn’t get out, helping them deal with the overwhelming turmoil and trauma they face trapped between Assad’s atrocities and ISIS’s brutality.

I’ve interviewed over 500 terrorists and family members. In Jordan a few weeks ago, I spoke to Abu Qatada, the so-called spiritual leader of al Qaeda in Europe. He quipped that the visa bans work in his favor, meaning Muslims in the Middle East saw it as the West directing hatred against them. I’ve heard the same in Belgium and in the Netherlands—deep resentment and widening divides are the result of this administration’s actions.

The newest executive order banning immigration from six Muslim-majority countries — Syria, Iran, Libya, Somalia, Sudan and Yemen –is again likely to fuel terrorism recruitment in the Middle East, Europe and here in the U.S. These moves are exactly what ISIS and al-Qaeda favor—they want their constituencies to believe the West is at war with Islam and Muslims everywhere, so they can convince there’s a need for “defensive” jihad.

Is it really possible that the Trump/Pence administration doesn’t understand that terrorists thrive on exactly these kinds of policies? If they don’t, we’re in trouble. And if they do, we’re in trouble because it begs the question: Why would our leaders endanger American lives here and abroad?

Keep in mind, there has never been an act of terrorism successfully carried out in the U.S. by a Muslim refugee or anyone from the six Muslim-majority countries the Trump administration has banned. In very rare cases, individual Muslims, as well as Christians, living in the U.S. have succumbed to ISIS’s seductive online propaganda, converting to a virulent ideology versus a real religion. And most have been caught attempting to leave the U.S. to join the promised “utopian ISIS Caliphate” in Syria.

Meanwhile, given visa waivers in EU countries that have had active terrorists arise from their citizenry, terrorist groups hardly need to succumb to a complex, two-year refugee or asylum vetting process to send operatives into the U.S. They can simply hop on a plane with a valid EU passport and little vetting—the travel ban doesn’t keep us safer. European authorities are not able to detect all of these, so those without criminal records and not under suspicion can easily pass visa waiver procedures to enter our country.

I’m certainly not suggesting we cut-off Europe, too. I am suggesting that we look at why ISIS has found recruiting in the U.S. difficult.

In the U.S., religious beliefs are not barriers to success and Muslim immigrants have for the most part successfully integrated, following in the footsteps of generations of immigrants coming to our melting pot. Case in point: During domestic riots over police killings of black men, ISIS tweeted to angry and distraught activists in Baltimore and gained no traction. Indeed, most domestic terrorism, according to the FBI, does not involve Muslim actors but is instead a product of far right hate, which targets Muslims, people of color, the gay community and “the other.”

President Trump toyed with the idea of a Muslim registry and an outright ban on all Muslim immigrants during his campaign. His administration seems to again be testing the waters to see just how far he can push the limits of American tolerance for his administration’s attitude. From the fear exploited by the Trump campaign, and now the fear being perpetrated by the Trump/Pence administration, very real danger is being created.

Let me be very clear – as a researcher on the psychology of terrorism, I know the vast majority of Muslims are in no danger of being recruited by extremist groups. But I am concerned for individuals already on the extreme fringes of society or mental health being actively recruited by groups like ISIS. What better proof that the U.S. really does discriminate against Muslims than to see whole countries of Muslims banned without any real logic regarding the choice of countries? Today at a counter-terrorism conference, even a British expert of Arab descent told me that when he’s denied a visa it makes him hate our country.

When the U.S. turns away women and children fleeing violence, it makes us look barbaric and that helps ISIS create a narrative to justify barbaric acts in retaliation. Trump/Pence policies create and increase “them v. us” religious and ethnic divides; implicitly label all Muslims as dangerous; create dangers for Muslims and minority groups living here in the U.S.; and alienate our very real Muslim allies around the world who are busy fighting terrorism in Iraq, Jordan and elsewhere. And indeed these policies will flare up anti-American vitriol and endanger Americans here and abroad. If that is the mission, then Mission Accomplished.

Anne Speckhard, Ph.D. is an adjunct associate professor of psychiatry in the School of Medicine at Georgetown University and Director of the International Center for the Study of Violent Extremism (ICSVE). She leads the Breaking the ISIS Brand – ISIS Defectors Interviews Project at ICSVE and is the author and co-author of seven books including: ISIS Defectors: Inside Stories of the Terrorist Caliphate.

Reference for this article: Anne Speckhard, Ph.D. (March 9, 2017) Trump’s Immigration Ban is Counterproductive in War on Terror. The Hill http://thehill.com/blogs/pundits-blog/homeland-security/323320-trumps-immigration-ban-is-counterproductive-in-war-on