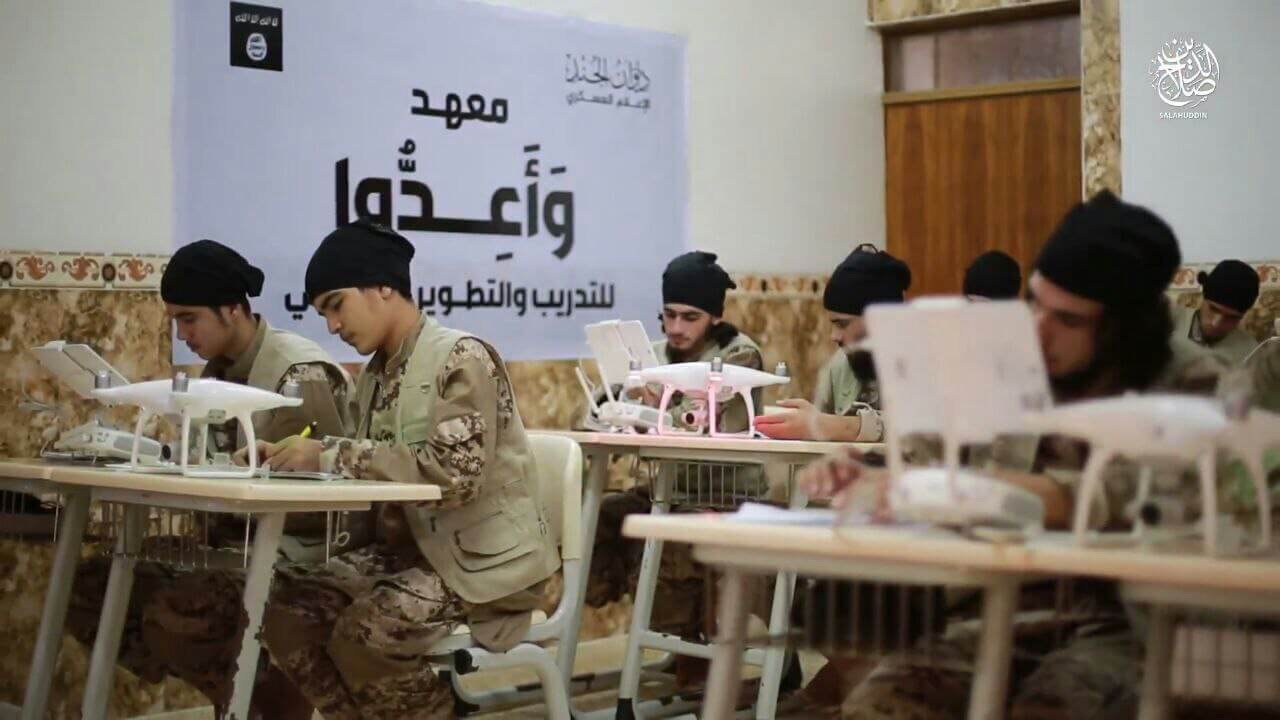 Like every other recent technological advancement, commercial aerial drones entered to our daily lives swiftly for a variety of practical uses. Drones have become widely available and fairly inexpensive over the years. Furthermore, there are constant technological improvements with drones from enabling their applications in different areas to extending their capacities and ranges. While the ISIS interest of drones goes back to 2013, ISIS terrorists have been using drones actively to capture video recordings for intelligence purposes and to record their suicide and other types of attacks, particularly when they record their suicide bombings and their after effects from the air since August 2014[1]. ISIS, additionally, have been inviting engineers, scientists and its highly-skilled supporters from the early days of the establishment of the Caliphate to move to their regions to contribute to the cause.

Drones are very easy to use and facilitate for different tasks and are even being sold in as toys in many marketplaces. A sophisticated individual can easily use and navigate different kinds of drones. Along with the ISIS war machine, drones started to become deadly tools for many, particularly in Mosul now. ISIS formally announced its drone program with a teaser drone picture in it Telegram application channels on January 24, 2017. Soon, it released a fully-recorded video of a small drone carrying out grenade-sized munitions and dropping the munitions on its targets successfully. Since then, ISIS weaponized drones became a daily part of the battlefield in Mosul, killing or wounding 39 Iraqi soldiers in a single week[2].

The first recorded terrorist attempt and intention to use drones for attacks was in September 2011 in the United States. A model hobbyist, 26-year-old physics graduate from Massachusetts, was arrested in an FBI operation for “planning to build small, explosive-laden drones to attack the Pentagon and the Capitol,” according to an FBI affidavit[3]. While the Massachusetts man was not successful in his attempt, ISIS now carries out daily attacks in Mosul against military personnel, targets and armored vehicles. ISIS also updates daily about its drone attacks on social media by releasing the numbers of attacks and their causalities.

The ammunitions used in those attacks are not sophisticated and less than a pound each. However, the success ratio in killings and the damage on even armored vehicles cannot be ignored. In fact, when compared with the ISIS suicide bombers, we can easily see the trend that drone bomb-dropping is about to replace the frequently carried out ISIS suicide bombings simply because drone attacks do not require a volunteer, and it is fairly inexpensive to prepare a drone with its ammunitions compared to an explosives-laden suicide vehicle.

According to confiscated documents and raided warehouses of ISIS, ISIS has purchased large numbers of drones and related parts for its drone program. Some parts were also ordered to extend the range of both remote controls and the drones in air[4]. Furthermore, recently, ISIS released another video on social media presenting a class with students studying different types of drones and trying to learn how to assemble and use them. Clearly, the terrorist organization is expanding its drone program and passing the know-how to its members by teaching how to engineer the drones to facilitate carrying their explosive loads, to aim and precision drop them on their targets.

The drone threat by groups like ISIS is increasing for several reasons. First of all, it is clear that ISIS is expanding and enriching its drone program simply because it proved successful with initial use. We should expect to see the use of drones for attacks not only in Mosul, but in the other parts of the battlefield as well, perhaps even beyond its borders in the West, where ISIS also likes to attack. Secondly, it would be wise to expect ISIS will try to expand the range of its drones. Most probably and based on the confiscated order lists[5], the ISIS engineers have been testing to extend the reach of drones. Under normal circumstances, some of the commercial drones can reach up to 3 miles without modifications. However, there are available kits to extend this range over 30 miles[6]. ISIS managing to fly drones over 30 miles would be a great concern as that would mean they could carry out attacks in the areas they do not control. In addition to the range, it is also possible to increase the load capacity by modifications as currently, most drones can only carry around 5 to 10 pounds of weight.

However, the utmost risks and threats come from two points that should be the chief concern for the security forces of the world. The first is the use of ISIS drones against civilians, particularly, in the West. ISIS can pass the know-how very fast, even without face-to-face interactions. It should be fairly easy to teach someone in the West how to assemble and modify a drone to carry explosives and drop them on targets. It is quite possible; an ISIS drone specialist can teach the know-how even to a teenager. If the ISIS can enable someone in Europe, even in Turkey, to modify the drones and provide the explosives to be used through different cells as happened in the Istanbul Reina Club attack where another cell member provided the weapons and explosives, ISIS can fairly easily carry out attacks against civilian populations. In Brussels we know that Kalashnikovs for various terrorist attacks were procured through the black market, likely grenades and other explosives are also readily available through criminal networks in Europe. And we know that ISIS has successfully seduced and directed cadres in the West to carry out attacks as well as sent back trainees to carry out attacks. The possibility of such an attack against a crowded venue and its aftermath could be catastrophic.

The second possibility, as much as it is more concerning, is another prospect of the drone use by terrorists, which is the weaponization drones with biological, chemical or nuclear agents. It is unknown if ISIS managed to confiscate military grade chemical weapons and agents from Syrian army depots and also possibly from former Saddam regime stockpiles[7]. It is believed that ISIS used different chemical agents, including blister agents, sarin gas, mustard gas or chlorine gas in the past years on different occasions[8]. It is also known that ISIS tried to produce chemical gas filled mortars to deliver agents[9]. Terrorists normally know no bounds in their pursuit for deadly agents. From this perspective, based on the recent reports of available, possible threats may include the prospect of the use of even small quantities of low-quality chemical agents in a drone attack against different populations. While the likelihood of ISIS’s facilitating professional military grade chemical weapons to be dropped as munitions is low for now, it appears that ISIS, like al-Qaeda before it, has managed to produce different low-grade chemical weapons over the past years. It is also reported that some European ISIS scientists with the assistance of local ISIS members conducted tests and experiments with different chemical agents[10].

Therefore, it would be very naïve not to consider the possibility of ISIS drone attacks in the West and the use of explosive or chemical agents, even in small quantities, in those attacks while also acknowledging severe limitations ISIS would face in production and deployment of such chemical agent-filled munitions to be dropped from the air. Nonetheless, the security forces must seriously consider countering both threats including the prospect of drone attacks on civilians with explosives and munitions filled with chemical agents.

On the side of fighting back against drone attacks, Western companies are already developing anti-UAV weapons, and amazingly golden eagles are also being trained by Dutch and French security forces to attack and take down enemy launched drones.[11] So there are good answers—provided those engaging the anti-drone mechanisms have enough forewarning to launch their retaliatory forces.

Ahmet S. Yayla, Ph.D. is co‐author of the just-released book, ISIS Defectors: Inside Stories of the Terrorist Caliphate. He is a Senior Research Fellow of the International Center for the Study of Violent Extremism (ICSVE) and is also Adjunct Professor of Criminology, Law and Society at George Mason University. He formerly served as Professor and the Chair of the Sociology Department at Harran University in Turkey. He is the former Chief of Counterterrorism and Operations Division for the Turkish National Police with a 20‐year career interviewing terrorists.

Anne Speckhard, Ph.D. is Adjunct Associate Professor of Psychiatry at Georgetown University in the School of Medicine and Director of the International Center for the Study of Violent Extremism (ICSVE). She is also the author of Talking to Terrorists, Bride of ISIS and coauthor of ISIS Defectors: Inside Stories of the Terrorist Caliphate; Undercover Jihadi; and Warrior Princess. Dr. Speckhard has interviewed nearly 500 terrorists, their family members and supporters in various parts of the world including Gaza, West Bank, Chechnya, Iraq, Jordan, Turkey and many countries in Europe. In 2007, she was responsible for designing the psychological and Islamic challenge aspects of the Detainee Rehabilitation Program in Iraq to be applied to 20,000 + detainees and 800 juveniles.

Reference for this article:  Ahmet S. Yayla & Anne Speckhard (Feb 28, 2017) The Potential Threats Posed by ISIS’s Use of Weaponized Air Drones and How to Fight Back. ICSVE Brief Reports https://www.icsve.org/brief-reports/the-potential-threats-posed-by-isiss-use-of-weaponized-air-drones-and-how-to-fight-back/