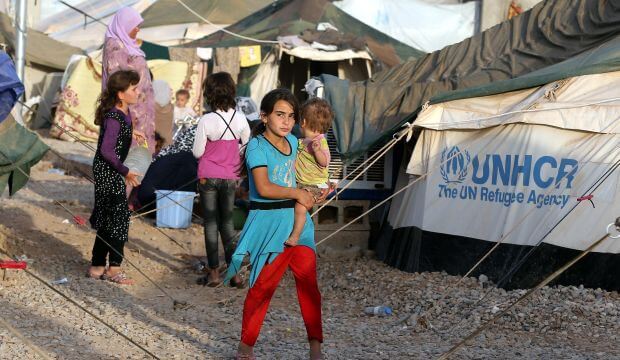 Sitting here in Erbil, the capital of Iraqi Kurdistan with my friend, I can’t help but feel deeply embarrassed. The federal court’s ruling against the Trump Administration’s ill-conceived Muslim travel ban is a saving grace, and may degrade its full power. But it will be hard to remove the reality that a U.S. President displayed this inept strategy, and lack of loyalty, during a time of such important coordination and sacrifice between American and Iraqi allies.

My friend is a Kurdish interpreter who worked in Iraq for the U.S. Army. Trump’s proposed travel ban has sent a chilling disillusionment across this nation during a time when the Iraqi regional forces are about to enter into what may be the most difficult phase of the Mosul offensive against ISIL. This lowered moral and spread of doubt about U.S. commitment to its regional allies could not come at a worse time.

Freed of Saddam Hussein by U.S. interventions, Iraqis continue to suffer the most from terrorism and sectarian killings that were unleashed within the first year of the U.S. intervention. Iraqi military leaders, already feeling they are bearing the burden of the chaos unleashed in their country, are mystified by this seemingly evolving ban. They are further burdened with having to tackle the negative mental and emotional impact that this wholesale rejection by its U.S. ally, is having on soldier morale. Local Syrians describe this blocking and barring of movements for isolated groups as a tactic more familiar in Assad’s Aleppo, not the U.S.

Additional questions arise on the ground here — why were Saudi Arabia and other Gulf countries not included in the list of banned countries? The most extreme forms of Salafism that inspires radical jihad, derives from these nations. Funding for ISIS and al-Qaeda has frequently been traced back to Gulf donors. It’s certainly well known that the 9/11 attackers were Saudi nationals. By excluding the Saudis, the ban reinforced conspiracy theories here that suggest the U.S. government organized the 9/11 attack with the Saudi government, a nefarious arrangement to take Iraq’s oil. These theories are further inflamed when Trump announces that we should have taken the oil.

Many U.S. citizens in Iraq are working tirelessly to build strong relationships — through government liaison, supporting the Mosul offensive, providing humanitarian support through non-governmental organizations, and hope to refugees and IDPs — also feel lower morale as their tireless efforts are also harmed by careless policy.

Although the political situation remains complex, U.S. citizens on the ground in Iraq can attest to the slow, but positive gains in repairing the American-Iraqi relationship since the 2003 invasion—which made this proposed ban even more of a slap in the face to us all. It’s very difficult for those of us pursuing reconciliation and collaboration to explain to our counterparts here what’s happening.

We remain threatened with the future possibility that we may not even be able to bring our Iraqi, Syrian and Muslim partners to the U.S. to conduct critical business, or include them in established programs such as the State Department’s special immigration category for those who have risked their lives to support U.S. missions. Equally worrying are the calls by some Iraqi leaders for a reciprocal policy in Iraq against Americans, which if implemented could cause U.S. citizens currently conducting critical work in Iraq to be deported.

The U.S. government and military leaders who are publicly pursuing “Islamic terrorist” rhetoric are not accurate representations of the counter-terrorism community. Counter-terrorism research shows that inside the U.S., U.S. citizens have conducted the majority of terror incidents and none have been conducted by refugees. As a CT practitioner, I’ve spent years dedicating myself to the specialized craft of detecting the signs of national security threats, none of which are related to ethnicity, religion and nation. As it is extremely poor craft to depict whole groups as somehow nefarious based on race or religion, so too is it to assume that only those with national ties to certain countries will be threat risks.

This mistaken rhetoric is precisely when we miss real threats. This short-sighted policy is precisely when we miss attacks. It reinforces negative sentiment in U.S. increasingly marginalized communities, which can increase the pull toward radicalized philosophies by those already on the fringe, regardless of religion or ethnicity. Current research shows that cultural marginalization and lack of integration is a driver for extremism. Just take a look at our European neighbors.

Bans threaten to have a massive destructive impact in the field—something the Trump administration continues to fail to contemplate. As I sit here in Erbil, I know we all deserve far better national security strategies that exercise caution, protect the lives of vulnerable individuals, maintain loyalties, and preserve freedoms. Which is precisely the point, isn’t it?

Stefanie Mitchell, currently based in Iraq, is working as a research fellow at ICSVE where she is working on peace-building initiatives. Stefanie previously served in the U.S. military as a counterterrorism professional, with deployment and fieldwork experience in the Middle East and Africa. She is the Co-Founder and Chairman of the Board of Directors of United Humanitarian Solutions, an Iraq based local non-governmental organization, focusing on post-conflict rehabilitation and development.

Incels, Autism, Violent Extremism and the Case of Alek Minassian

Gone with the “Flow.” An analysis of the psychological drivers of Western women’s radicalisation

Anna Zizola From the book “Women on the Verge of Jihad. The Hidden Pathways towards…