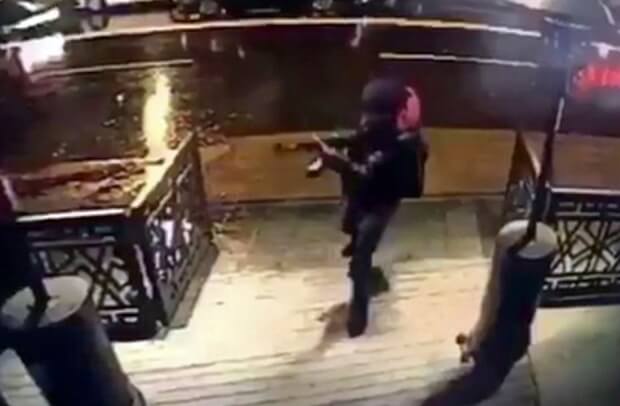 ISIS attacked again in Turkey, this time on New Year’s Eve in the Reina Night Club, one of the most well-known and crowded entertainment venues in Turkey where foreigners were known to gather, killing thirty-nine and wounding another sixty-nine. Initially, ISIS did not claim the attack, however, several ISIS related Telegram accounts in Turkish and Arabic soon afterwards began claiming responsibility and cheering for the attack. Then, on, January 2, 2017, the Islamic State claimed responsibility via its Amaq news agency claiming that the killing spree was carried out by “a Caliphate soldier” and later in the evening released a video of him walking around the central Taksim square in Istanbul, perhaps an indicator that he is already securely out of the country.[1]

According to Hurriyet Turkish news, the terrorist responsible for this attack, similar to the cell who carried out the triple suicide attacks on the Ataturk Istanbul Airport in June 2016 appears to be Central Asian, either Kyrgyz or Uzbek.[2] He also appears as a professional terrorist with weapons and military training, as he calmly changed the magazine of his automatic rifle three times, something requiring cool nerves and training and killed without any hesitation first, the police officer at the entrance to the club to ensure he would not get any resistance as he entered and then his many victims as he carried out his attack. He also spent only seven minutes gunning down his victims, shooting them once again as they lay on the floor, to ensure the most kills.

As a Central Asian, he would likely be a Russian speaker and would either be a member, or have close ties, to the Caucasus Emirates (sub-group) of the Islamic State who include battle hardened Chechens, Dagestanis and others who have long experience fighting against the Russians with some also having fought in the Afghan jihad.[3] In our research interviewing ISIS defectors, Chechens, Kazakhs and Turkmens were often referred to as the Special Forces of ISIS and described as highly experienced, military trained, taking the lead in battles and doing the most killing while the others followed behind. Omar Sheshani, the recently killed Minister of Defense of ISIS fought with this group as well, although he was not Chechen, but a convert from Georgia.

There are now three attacks in Istanbul involving Central Asians or the Caucasus Emirates of the Islamic State versus local Turks. The first is a black widow suicide bombing in the Sultan Ahmet region of Istanbul in January 6, 2015 in which Dagestani born Diana Ramazova, the pregnant widow of a Norwegian Chechen ISIS cadre exploded herself outside a police station in Istanbul. The second are the triple suicide attacks on June 28, 2016 at Istanbul Atatürk Airport. And the final one is the Reina nightclub shooting. Apart from those three attacks, all other ISIS attacks in Turley were carried out mainly by locals. Also, none of the attacks but the Reina and Diyarbakir attack against Turkish Kurds were claimed by ISIS.

It appears that ISIS is carrying out its critical operations against Turkey through the highly trained, dedicated and well-disciplined Central Asian and Caucasus Emirate cells versus using locals to ensure the success of their attacks. There might be several reasons for that including the consideration of the proven success of experienced Caucasus and Central Asian fighters; trying to evade the radar of intel as foreigners are less known, and to protect local connections if an attacker was caught alive based on the rules of the cell structure terrorist organizations apply to their hierarchy.

Apart from the attack itself, there are several other problems that need to be considered for this incident., Such an attack was predictable due to several reasons, including ISIS’s open threats to Turkey via their online statements and its online Rumiyah Magazine in retaliation for Turkish air strikes in the al-Bab region in which Turkish airstrikes have repeatedly destroyed ISIS targets and killed over 150 of their cadres, and intelligence received and shared by foreign and national agencies all signals that should have caused the police to take extra security and preventive measures beforehand.[4]  The owner of Reina Club in his statement to the public, stated that he was also informed about the possible threats of attacks. Likewise, several ISIS talking heads in the social media, chiefly in Telegram chat channels, openly threatened Turkey and the people who were celebrating Christmas in Turkey. In addition to the ISIS threats, several Islamist groups including the ruling party, AKP, carried out campaigns against Christmas celebrations. In fact, the Ministry of Education authorities issued orders to ban Christmas celebrations in schools. So, there was an increasing anti-Christmas sentiment in the country as well.

Seeing all of this, a regular police chief in a city like Istanbul, would normally fortify and reinforce security at the Reina Club on New Year’s Eve given it hosts so many internationals. However, there was only one police officer at the gate of the club and there were not any other security precautions taken by the police around the club. This is an unforgivable mistake from a security standpoint. Secondly, the Istanbul police had an ongoing peace operation with the involvement of 35,000 police officers all around the city, named PEACE34. Somehow, with 35,000 officers on the streets and checkpoints close to the Reina club the attacker spent seven minutes in his killing spree, left without any interruption and managed to get lost among the 35,000 police officers on the street. Under normal circumstances, the response time to a site like Reina, in the center of the city is under three minutes. Also, because of the increased security in the city, there were at least triple more officers on the streets around the club compared to normal working hours. There were motorcycle police teams to react swiftly and police checkpoints close to Reina. The whole area should have been blocked in seconds. Clearly, the police failed to take appropriate preventive security measures and to manage the aftermath of the attack by not intervening in a timely fashion to catch the attacker as he fled.

ISIS has now taken the gloves off with Turkey following the Turkish airstrikes against ISIS in the al-Bab region and the treaty Turkey signed with Russia and Iran on Syria. It is a clear policy change toward Turkey for ISIS and a signal of more to come. This comes in the same time frame in which Turkish President Erdogan has weakened Turkish police and intel force as he purged and fired critical police chiefs and officers, first after the December 17-25, 2013 infamous corruption operations against his close circles and son, and then again after the July 15, 2016 coup attempt. All senior counterterrorism, intelligence, SWAT and organized crime division officers and chiefs were purged and several of them were arrested. The ones who replaced them are still inexperienced, meaning Turkey lacks a well-trained and experienced police force to counter the growing threat from terrorist attacks in the near future. With this policy, of course the newly hired police also shifted priorities from the radical Islamist terrorists to Erdogan’s enemies, so called “coup supporters” and “Gulenists” and carried out hundreds of operations against them, arresting over 50,000 while another 130,000 people were fired.

Also, ISIS and al-Nusra terrorist organizations were not deemed as threats in Turkey until very recently, and in fact the AKP government openly and secretly provided support to these terrorist originations until recent months. Since 2014, all ongoing radical Islamist counterterrorism operations were halted by the new administration and there was not any single planned counterterrorism operation anywhere in Turkey during 2014 and 2015. The operations in 2016 were mostly reactionary operations and also troubling is that Islamist detainees were released swiftly. As a result of these ill-intended policies, the number of people killed in Turkey from Salafi jihadi attacks has skyrocketed between 2014 and 2016, a surge more than three hundred percent compared to recent years[5]. These dramatic and troubling policy changes yielded today’s security problems as ISIS has already established a dangerous and strong network of terrorist cells all over Turkey. Turkey first ignored, allowed and then supported ISIS, assuming that it would keep the Kurdish militias in check and would never come back and bite its protector. However, as one counter-terrorism expert quipped, “When you invite cannibals to dinner you can expect to end up as the main course.”

Ahmet S. Yayla, Ph.D. is co‐author of the just released book, ISIS Defectors: Inside Stories of the Terrorist Caliphate. He is Deputy Director of the International Center for the Study of Violent Extremism (ICSVE) and is also Adjunct Professor of Criminology, Law and Society at George Mason University. He formerly served as Professor and the Chair of the Sociology Department at Harran University in Turkey. He is the former Chief of Counterterrorism and Operations Division for the Turkish National Police with a 20‐year career interviewing terrorists.