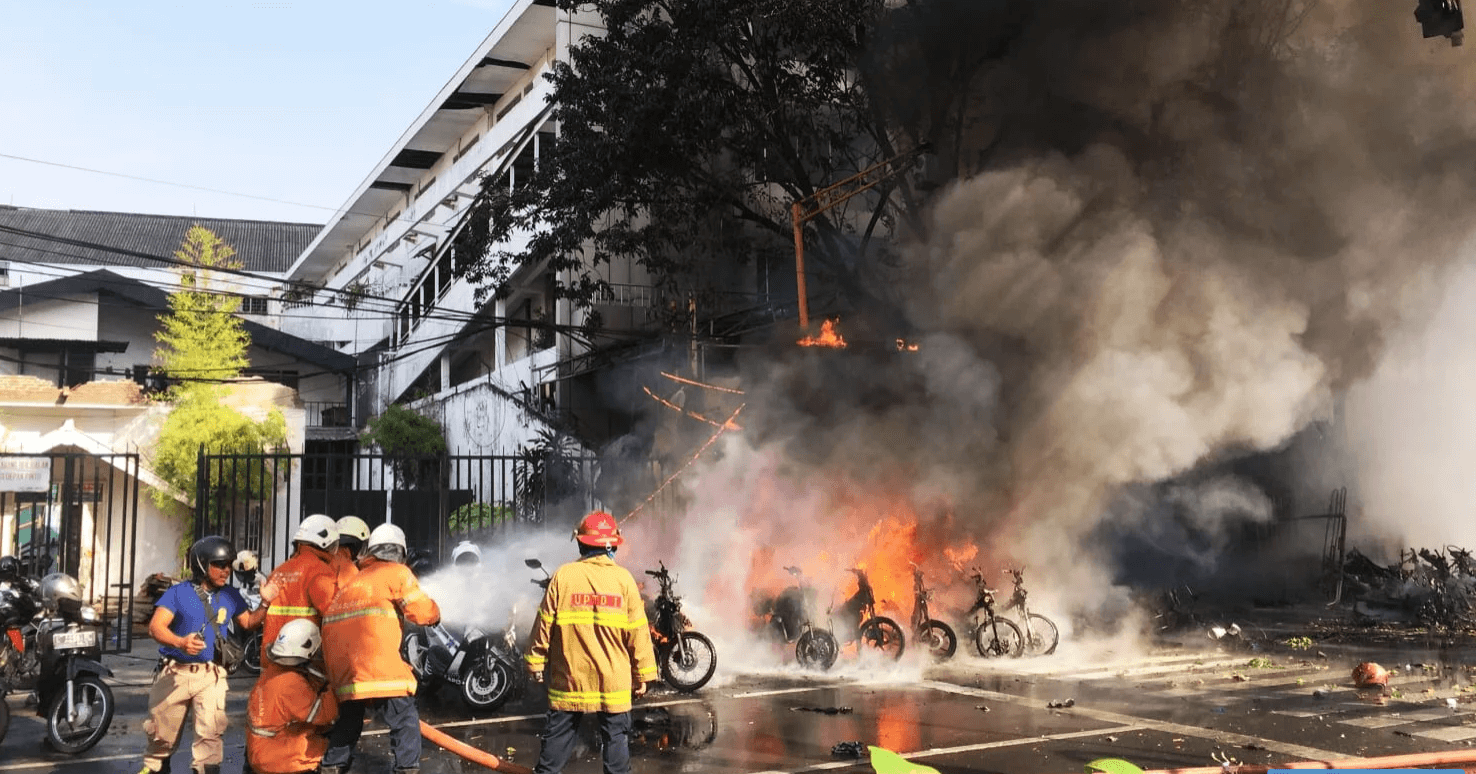 The deadly attacks during Sunday services in Indonesia were the work of a whole family. They reportedly had returned from ISIS-land—a cautionary lesson as others seek to head home.

as published in the Daily Beast

While Mother’s Day was being celebrated in the United States, Canada and Australia, a gruesome “celebration” of another kind took place in Indonesia: three nearly simultaneous suicide attacks on three separate churches in Surabaya, all carried out by the members of the same family.

The wave of carnage aimed at killing morning service goers rocked the Indonesian city, killing at least 11 people, and injuring another 40, adn people around the world asked how a mother, Puji Kuswanti, could strap bombs on herself as well as on the bodies of her two daughters, Fadila Sari, 12, and Pamela Rizkita, nine, and take them to the Diponegoro Indonesian Christian Church to blow themselves and others up.

Meanwhile, the family’s sons, Yusuf, 18, and Alif, 16, rode motorcycles into Santa Maria Catholic Church, and detonated explosives they were carrying. Their father, Dita Sopriyanto, drove his bomb-laden car into the grounds of Surabaya Centre Pentecostal Church where he self-detonated.

The so-called Islamic State already has claimed credit for the attack while Surabaya Police Chief Tito Karnavian confirmed to the BBC that the family belonged to an Indonesian ISIS-inspired network, Jemaah Ansharut Daulah (JAD). While al Qaeda killed 202 persons in the Bali bombings in 2002, since then ISIS attacks in Indonesia have been smaller scale and foiled. Recent prison riots set off with ISIS incitement may have spurred these attacks.

The family of six suicide attackers is thought to be among more that 500 Indonesian ISIS sympathizers who have returned from Syria and Iraq. If true they must have imbibed the ISIS Takfir ideology according to which all those who do not adhere to ISIS’ strict interpretations of Islam are enemies worthy to be killed, even if they are other Muslims.

The members of this family, or at least the parents, believed they were taking a short-cut to Paradise, faithful to the militant jihadi teaching that “self-martyrdom” and the killing of the enemies of ISIS brings about the instant reward of bypassing the Judgment Day, forgiveness of all sins, 72 virgins for male martyrs, and eternal beauty for females. This also includes the opportunity for the “martyr” to grant entry to Paradise to another 70-plus family members.

Thus far no Indonesian women or children have taken part previously in terror attacks—this one now opens the door for such participation and underlines the dangers of female and child returnees from ISIS.
The issue of ISIS returnees remains a hotly debated topic. Many governments worldwide are openly expressing their concerns over a flood of weapons-trained ideologically militant men returning home since the territorial defeat of ISIS in Iraq and much of Syria. While that deluge has not materialized—most of the men have been killed, arrested, or remain at large in the region—the question of how to deal with women and children returnees has no clear answer.

Governments facing the problem of female returnees are trying to decide on a case-by-case basis. The debates continue over whether they should be allowed to return home at all, and if so, whether they might represent a danger to society. Questions also linger over whether they need to be prosecuted—in the case of adult women—and if they can be successfully rehabilitated and reintegrated, in the case of both women and children.

Given that ISIS routinely separated boys as young as six from their parents in camps where they were ideologically indoctrinated and weapons trained, it is not inconceivable that teenage male returnees might pose a grave danger. ISIS also routinely invited foreign fighters’ wives to join the dread ISIS hisbah (morality police), in which they were issued Kalashnikovs, were given great power over others, and took part in brutally abuse of other women for violating ISIS-mandated dress codes and other infringements.

Similarly, foreign women were invited to become ISIS’ online recruiters, writing blogs, contacting others online, and seducing them into joining. And our interviews doing research for the International Center for the Study of Violent Extremism make it clear that some women were also combat trained, particularly as ISIS faced the U.S.-led coalition’s onslaught, with women being trained to throw grenades, place and detonate explosives, and fire rifles. Some were issued suicide vests and were also sent to detonate themselves.

Whether that was the case with Puji Kaswanti is still not clear, and it is too early to say whether her suicide and the martyrdom of her children will be the exception or the rule for mothers and children indoctrinated by the blood cult that is ISIS.

Reference for this Paper: Speckhard, Anne & Shajkovci, Ardian (5-13-2018) The Family that Slays Together –  Mother’s Deadly Day: She Blew Up Herself and Her Two Girls to Murder Christians. The Daily Beast https://www.thedailybeast.com/mothers-deadly-day-she-blew-up-herself-and-her-two-girls-to-murder-christians?ref=author

Anne Speckhard, Ph.D., is Director of the International Center for the Study of Violent Extremism (ICSVE) and serves as an Adjunct Associate Professor of Psychiatry at Georgetown University School of Medicine. She has interviewed over 600 terrorists, their family members and supporters in various parts of the world including in Western Europe, the Balkans, Central Asia, the Former Soviet Union and the Middle East. In the past two years, she and ICSVE staff have been collecting interviews (n=78) with ISIS defectors, returnees and prisoners, studying their trajectories into and out of terrorism, their experiences inside ISIS, as well as developing the Breaking the ISIS Brand Counter Narrative Project materials from these interviews. She has also been training key stakeholders in law enforcement, intelligence, educators, and other countering violent extremism professionals on the use of counter-narrative messaging materials produced by ICSVE both locally and internationally as well as studying the use of children as violent actors by groups such as ISIS and consulting on how to rehabilitate them. In 2007, she was responsible for designing the psychological and Islamic challenge aspects of the Detainee Rehabilitation Program in Iraq to be applied to 20,000 + detainees and 800 juveniles. She is a sought after counterterrorism experts and has consulted to NATO, OSCE, foreign governments and to the U.S. Senate & House, Departments of State, Defense, Justice, Homeland Security, Health & Human Services, CIA and FBI and CNN, BBC, NPR, Fox News, MSNBC, CTV, and in Time, The New York Times, The Washington Post, London Times and many other publications. She regularly speaks and publishes on the topics of the psychology of radicalization and terrorism and is the author of several books, including Talking to Terrorists, Bride of ISIS, Undercover Jihadi and ISIS Defectors: Inside Stories of the Terrorist Caliphate. Her publications are found here: https://georgetown.academia.edu/AnneSpeckhardWebsite: and on the ICSVE website https://www.icsve.org Follow @AnneSpeckhard

Ardian Shajkovci, Ph.D. – is the Director of Research and a Senior Research Fellow at the International Center for the Study of Violent Extremism (ICSVE).  He has been collecting interviews with ISIS defectors and studying their trajectories into and out of terrorism as well as training key stakeholders in law enforcement, intelligence, educators, and other countering violent extremism professionals on the use of counter-narrative messaging materials produced by ICSVE both locally and internationally. He has also been studying the use of children as violent actors by groups such as ISIS and how to rehabilitate them. He has conducted fieldwork in Western Europe, the Balkans, Central Asia, and the Middle East, mostly recently in Jordan and Iraq. He has presented at professional conferences and published on the topic of radicalization and terrorism. Prior to joining ICSVE, Ardian has spent nearly a decade working in both the private and public sectors, including with international organizations and the media in a post-conflict environment. He holds a doctorate in Public Policy and Administration, with a focus on Homeland Security Policy, from Walden University. He obtained his M.A. degree in Public Policy and Administration from Northwestern University and a B.A. degree in International Relations and Diplomacy from Dominican University. He is an adjucunt professor teaching cybersecurity and counterterrorism courses at Nichols College.