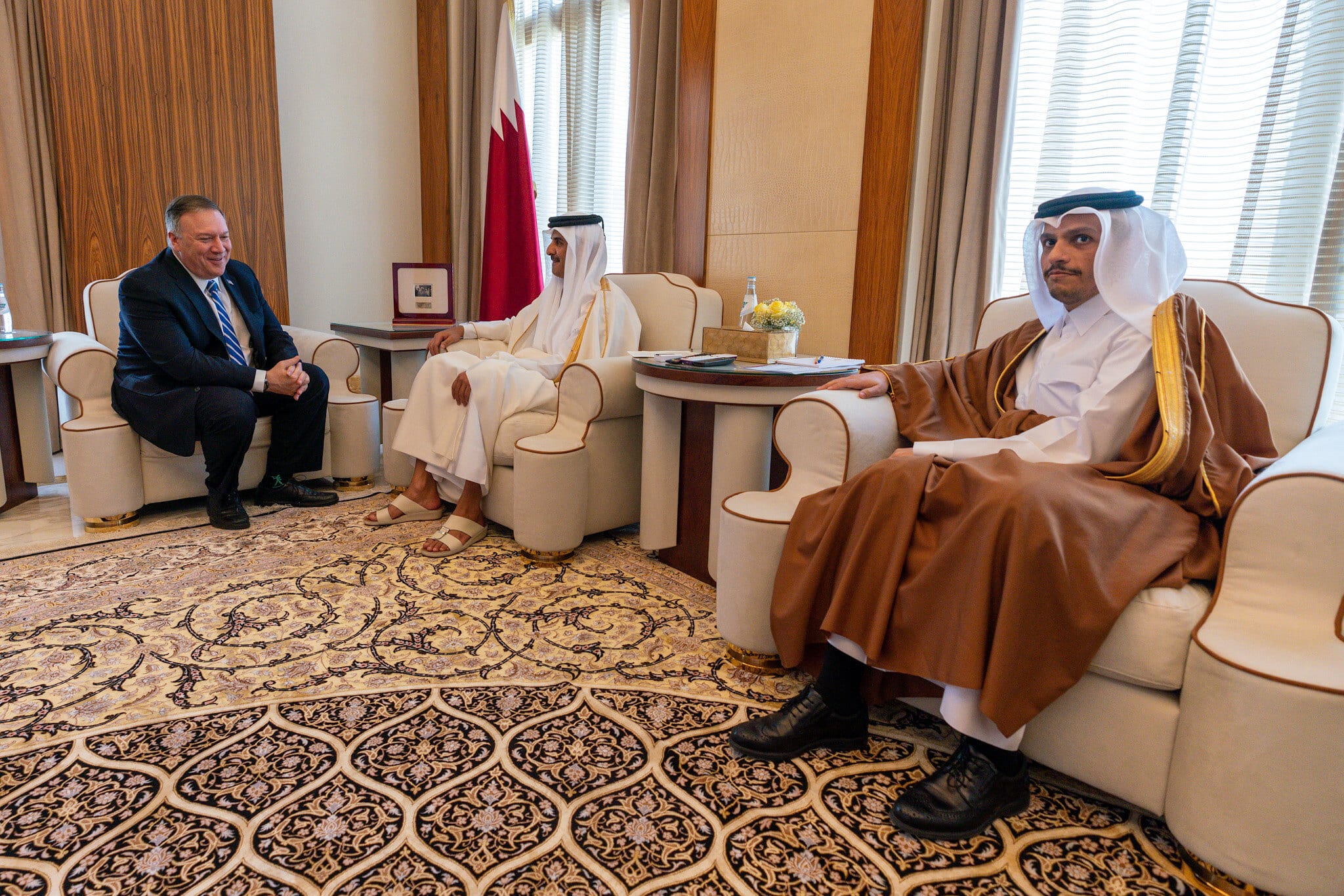 In an unusual twist, ISIS spokesperson Abu Hamza al-Qurashi broke ranks with previous statements by al Qaeda, its affiliates, and ISIS in singling out and threatening Qatar, rather than their usual targets Saudi Arabia or Western powers in an audio statement released by ISIS’s al Furqan media outlet on May 28, 2020. This is the first time that a leader of ISIS has threatened Qatar, albeit the threats came in the last two minutes of the 40-minute audio file. Prior to the threat, Qurashi spoke about the current COVID-19 pandemic causing widespread deaths among Western countries whose militaries brought down the territorial ISIS Caliphate, likening it to scriptural accounts of the plagues that Moses brought upon Pharaoh in ancient times. Qurashi pointed out that the pandemic was killing civilians from Western coalition countries at a similar rate to those killed by airstrikes in Mosul and Raqqa.

Hassan Hassan, Director of the NonState Actors Group of the Center for Global Policy tweeted that “This focus on Qatar is unprecedented,” and states that it is very unusual for ISIS to fail to blame and threaten Saudi Arabia in their strategic communications, and that he could find no clear justification from the point of ISIS to issue such threats pointedly aimed at Qatar while leaving the rest of the Gulf nations out of it.

Moreover, BBC jihadism expert Mina Al-Lami noted that the last message from ISIS leadership focused on threatening Israel and targeting Jews. She noted that it was strange to focus on Qatar and that this usual theme from January was nonexistent in ISIS’s May message.

Meanwhile, Dr. Andrea Krieg noted that the ISIS narrative about Qatar curiously sounds like one from the blockade countries of Saudi Arabia and the United Arab Emirates.

Qurashi finished his statement by attacking Qatar’s role in the U.S.-Taliban peace deal, though he also criticized the Taliban for signing the deal. He then blasted Qatar for hosting a U.S. air base and accused Qatar of supporting the Muslim Brotherhood-backed groups in Syria that fought against ISIS. Qurashi also claimed that Qatar financed factions in Iraq and Syria that were backed by the U.S. and that Qatar has worked quietly against ISIS, in consort with various “apostate” forces. Harkening to before ISIS spread its Caliphate into Syria, Qurashi also warned Qatar that ISIS still remembers Qatar’s support for the Sahwat, the U.S.-backed Awakening Councils that fought ISIS when it was still al Qaeda in Iraq. Lastly, he attacked Qatar for allegedly supporting Shia governments and the Iranian Revolutionary Guard with billions of U.S. dollars. He then recited from the Holy Quran, saying, “In the end, Allah will support the true believers against the agents of the apostate.”

That ISIS would issue threats against Qatar for brokering the Taliban peace deal with the U.S., supporting a U.S. base, or having a working relationship with Iran is understandable from ISIS’s point of view, nor are threats toward others for such actions rare. It is interesting, however, to single out Qatar without mentioning Saudi Arabia, United Arab Emirates or other Gulf supporters to the U.S.-led coalition to defeat ISIS. Even more, ISIS’s claim that Qatar funds the Muslim Brotherhood and the Iranian Revolutionary Guard is a narrative most often put forth by Saudi Arabia and United Arab Emirates. In June 2017, those same countries, along with Bahrain and Egypt, imposed a blockade on Qatar, accusing it of supporting terrorism, including the Muslim Brotherhood and Iran. After three years, the blockade has not been lifted, and that ISIS would echo the claims of countries it has declared to be run by apostate governments is puzzling. Two days after Qurashi’s message was released, rumors that Qatar was withdrawing from the Gulf Cooperation Council (composed of Saudi Arabia, United Arab Emirates, Bahrain, Kuwait, and Oman) were refuted by Qatar.

Aside from curiously targeting Qatar, in the message ISIS calls for more attacks, insisting that their fight rages on and urging its fighters around the world to prepare their strength and seek vengeance on the “enemies of God.” Qurashi emphasized this goal in his statement by threatening that “recent attacks [in Iraq] are only a taste of what’s coming,” warning the U.S., which is withdrawing troops from Iraq, that “your war with us is long.” The statement also reiterated ISIS leader Caliph Abu Ibrahim’s message to ISIS supporters to “prepare plans and increase operations,” to take revenge for harmed Muslims, and to free imprisoned ISIS fighters.

Anne Speckhard, Ph.D., is Director of the International Center for the Study of Violent Extremism (ICSVE) and serves as an Adjunct Associate Professor of Psychiatry at Georgetown University School of Medicine. She has interviewed over 700 terrorists, their family members and supporters in various parts of the world including in Western Europe, the Balkans, Central Asia, the Former Soviet Union and the Middle East. In the past three years, she has interviewed  239 ISIS defectors, returnees and prisoners  as well as 16 al Shabaab cadres and their family members (n=25) as well as ideologues (n=2), studying their trajectories into and out of terrorism, their experiences inside ISIS (and al Shabaab), as well as developing the Breaking the ISIS Brand Counter Narrative Project materials from these interviews which includes over 175 short counter narrative videos of terrorists denouncing their groups as un-Islamic, corrupt and brutal which have been used in over 125 Facebook campaigns globally. She has also been training key stakeholders in law enforcement, intelligence, educators, and other countering violent extremism professionals on the use of counter-narrative messaging materials produced by ICSVE both locally and internationally as well as studying the use of children as violent actors by groups such as ISIS and consulting foreign governments on issues of repatriation and rehabilitation of ISIS foreign fighters, wives and children. In 2007, she was responsible for designing the psychological and Islamic challenge aspects of the Detainee Rehabilitation Program in Iraq to be applied to 20,000 + detainees and 800 juveniles. She is a sought after counterterrorism expert and has consulted to NATO, OSCE, the EU Commission and EU Parliament, European and other foreign governments and to the U.S. Senate & House, Departments of State, Defense, Justice, Homeland Security, Health & Human Services, CIA, and FBI and appeared on CNN, BBC, NPR, Fox News, MSNBC, CTV, and in Time, The New York Times, The Washington Post, London Times and many other publications. She regularly writes a column for Homeland Security Today and speaks and publishes on the topics of the psychology of radicalization and terrorism and is the author of several books, including Talking to Terrorists, Bride of ISIS, Undercover Jihadi and ISIS Defectors: Inside Stories of the Terrorist Caliphate. Her publications are found here: https://georgetown.academia.edu/AnneSpeckhardWebsite: and on the ICSVE website http://www.icsve.org Follow @AnneSpeckhard

Molly Ellenberg, M.A. is a research fellow at ICSVE.  Molly Ellenberg holds an M.A. in Forensic Psychology from The George Washington University and a B.S. in Psychology with a Specialization in Clinical Psychology from UC San Diego. At ICSVE, she is working on coding and analyzing the data from ICSVE’s qualitative research interviews of ISIS and al Shabaab terrorists, running Facebook campaigns to disrupt ISIS’s and al Shabaab’s online and face-to-face recruitment, and developing and giving trainings for use with the Breaking the ISIS Brand Counter Narrative Project videos. Molly has presented original research at the International Summit on Violence, Abuse, and Trauma and UC San Diego Research Conferences. Her research has also been published in the Journal of Child and Adolescent Trauma and the Journal of Strategic Security. Her previous research experiences include positions at Stanford University, UC San Diego, and the National Consortium for the Study of Terrorism and Responses to Terrorism at the University of Maryland.