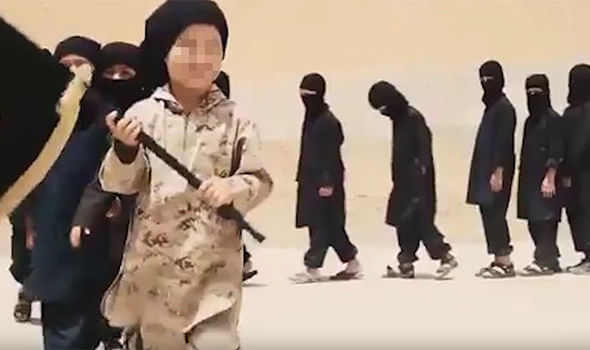 THE Islamic State has managed to radicalise up to half a MILLION children, experts have disclosed in a shocking revelation over the scale of the terror threat.

ISIS trained youngster speaks of horrors of being a child soldier

Terror experts, psychologists and analysts have been scrambled to assess how the threat from hundreds of thousands of children who served ISIS can be countered.

The new find poses a deadly threat to countries such as France, the UK and the USA, all of which have been threatened with mass bloodshed on the streets.

Anne Speckhard, Associate Professor of Psychiatry at Georgetown University, has travelled to Iraq to help deal with the crisis facing the country.

The expert from The International Center for the Study of Violent Extremism (ICSVE) has also come face to face with the kids of the caliphate.

She told Express.co.uk: “There was a lot of discussion about the numbers of youth involved – 250K to 500K.

“ISIS banned the books from schools and replaced with their own curriculum and materials encouraging hatred and brutality, many of which were shown to us on a display.

“There is anger and concern about how to regroup in the face of ISIS destruction and worry that the ideology can continue to live in the hearts and minds of Sunnis who lived under ISIS and re-emerge.”

As many as 500,000 children may have been radicalised

Jihadis infiltrated classrooms, destroyed libraries and forced teachers to deliver a programme of hate in areas overtaken by ISIS.

The Iraqi Prime Minister opened the Education in the Post-Daesh Iraq conference in April, where experts were told of the true extent of the problem.

Before the invasions of towns in Iraq, a group called the ISIS ‘Emni’ planted radical preachers to prepare the ground.

They learnt the grievances of local people and played on them to recruit families.

The elite ‘Emni’ – made up of former Iraqi Baathists who served under Sadaam – is believed to be linked to terror attacks in Paris, Brussels and Tunisia.

The programmes under which children were indoctrinated were extremely successful.

Testimony from young soldiers who served ISIS has revealed they lived to serve the older jihadis who sent boys as young as five to their deaths.

Professor Speckhard said: “Some of the youth were actually recruited into the Cubs of the Caliphate and some were taught to behead.

“Likewise some teachers were forced to teach in ISIS schools and what to do with them.

In a series of interviews with Daesh jihadis, Professor Speckhard, along with Professor Ahmet Yayla, a former counter terror police chief, established how young boys are recruited.

Their book, entitled ‘ISIS Defectors: Inside Stories of the Terrorist Caliphate’, revealed how ISIS set out to radicalise children in an attempt to bolster its own ranks in 2015.

Within months it had hundreds on its books.

Professor Speckhard said: “The child who told us about kids being tricked and put in suicide vehicles even not knowing they were going to be exploded, an ISIS emir verified that kids are sent both in vehicles and wearing vests.

“They are so brainwashed that they cry when they are taken off the list.”

He told the professors: “No. If you don’t join ad-Dawlah and pledge your loyalty to Abu Bakr al-Baghdadi you are an in infidel.

“Some of the local [ISIS] fighters said they now knew that their father was an in del and that as soon as they could, they would take leave and would go kill him.”

Despite there being massive steps taken by coalition countries to defeat ISIS troops – there are doubts they can be eradicated.

Ms Speckhard said: “However defeating ISIS territorially will not necessarily defeat the idea, the dream of a Caliphate even on achieved through extreme brutality.

“The original grievances must be addressed so that local populations no longer see ISIS as a good solution.

“We at ICSVE are working hard at Breaking the ISIS Brand using the real voices and stories of ISIS cadres captured on video speaking against the group to disrupt their recruitment, delegitimise and discredit the group and its ideology. “

So much damage was done to so many of the young boys there will need to be a massive psychological intervention for boys.

And those who are not seen, are likely to be living with anger and trauma.

Professor Speckhard said: “The ones we talked to in prison are eager to go home and want to see their families, and weep talking about how much they miss their fathers and mothers.

“They realise now they were duped and feel ashamed.”

“They need help but yes of course they can be rehabilitated and reintegrated, and their communities and families need support.

“Imagine the Yezidi boy who watched his father and elder men hauled off to be executed, his mother and sister taken as sex slaves and he’s taken to the Cubs where they teach him death is the way to achieve paradise and perhaps reunite with his killed family members, that brutality is the answer to life’s problems and he is returned to a traumatised mother with the men missing.

“He needs support or his aggression will continue.

“Imagine any ISIS kid who has carried out murders and rapes returning to his community where victims who are angry still live.