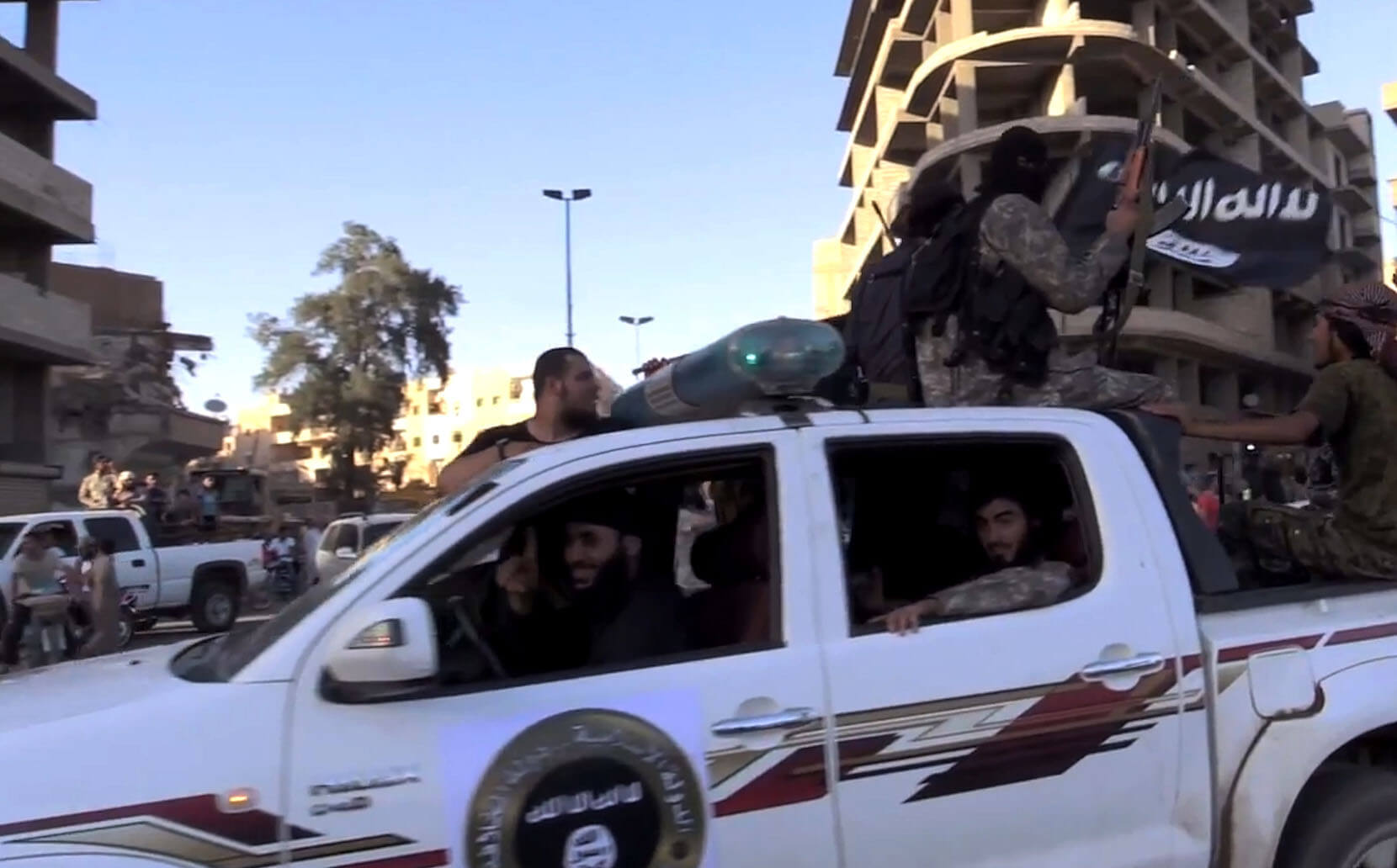 Swearing my Bayat to the Islamic State in Fallajuah is the 73rd counter narrative video in the ICSVE Breaking the ISIS Brandseries. This video features 46-year-old Iraqi Abu Bassim. He was interviewed in 2017 in an Iraqi prison in Baghdad, Iraq, by Anne Speckhard. The video clip was video edited and produced by our ICSVE team.

Between 2003 and 2009, upwards of one hundred thousand detainees are believed to have passed through Camp Bucca in Iraq. Camp Bucca was the main detention facility for coalition forces following the U.S.-led coalition invasion of Iraq. Camp Bucca proved to be instrumental for inmate collaboration and networking, and prison radicalization, among other nefarious activities. Namely, it is here that many militant jihadis, including the al Qaeda in Iraq leadership, met each other—if not already in contact—and  freely communicated, exchanged ideas and phone numbers, indoctrinated, trained new members, and laid a groundwork for the continuation of al Qaeda in Iraq and what later emerged as ISIS. Notably, the camp at various time housed some of the most prominent and high-ranking militant jihadis, who later led the so-called Islamic State. This included Abu Bakr al Baghdadi, the current leader of ISIS.

Abu Bassim claims not to belong to the group of Camp Bucca detainees who later formed ISIS. He was arrested and spent time in Camp Buccain 2007 and was released after being detained for a year. He remembers being so happy to reunite with his family who anxiously awaited his return. His joy upon being released was short-lived, however, according to his claims.

Most of Abu Bassim’s brothers were members of the Iraqi security forces, where he also served as their bodyguard. As a result, when ISIS took over his area, he was arrested by ISIS and put to prison, despite already having been viewed as a terrorist suspect by U.S. forces. In ISIS custody, he claims to have been “invited” to join ISIS, while also admitting he really had no say in such a decision. “Honestly, you can’t refuse or say no,” he explains.

Upon joining ISIS, he was put to work in their housing department, where he helped displaced families by providing them shelter and housing. He recalls witnessing ISIS treating people poorly. “There was hunger, no services and no food,” he recounts. Abu Bassim claims to have been forced to join ISIS, a group he says only led to destruction.  He now warns other not to join. “This prison—it’s the end of the life. We didn’t see anything [good] of it [from ISIS],” he concludes the interview.

Do you believe Abu Bassim is who he says he is?

Do you believe Abu Bassim was forced to join ISIS?

Do you believe Abu Bassim’s story that he was not a part of the early al Qaeda in Iraq cell formations in Camp Bucca, i.e. those who later formed ISIS?

What does Abu Bassim’s story, including the stories of many others detained in Camp Bucca, convey about the relationship between detention and radicalization, including violence?

What lessons can we derive from the Camp Bucca experience to reduce the risk of violent extremism in the future?

What are the implications of large camp detention facilities, such as Camp Bucca, for governments worldwide in light of ISIS losing its territory and having hundreds of ISIS fighters, women, and children currently held in detention camps in Iraq and Syria?

Would it be possible to use video clips and stories like Abu Bassim’s to help those in detention consider if they want to forsake the ISIS and al Qaeda ideology?

Islamic Scriptures Related to this Video

Abu Bassim claims he was forced to join ISIS.Forcing people to do anything is against Islamic law. ISIS members believe that they know the ultimate truth and therefore they have to “save” people from the “darkness” of ignorance and infidelity. Islam does not force people to believe, as that is the way to create hypocrites. In fact, Allah, the most high, says in the Quran:

“There is no compulsion in religion. Righteousness is now distinct from error. He who disbelieves in the idol and believes in Allah has grasped the firmest tie that will never break. Allah is Hearing, Knowing” (Al-Baqarah , the cow, Surah no. 2, Ayah no. 256).Likewise, in another Ayah of the Quran, Allah declares: “And if your Lord (O Muhammed) had pleased, surely all those who are in the earth would have believed, all of them; will you then force men till they become believers?” (Surah Yunus, Jonah, Surah no. 10, Ayah no. 99).

From these verses, we can clearly see that Allah, the creator of the universe and the omnipotent, did not force people to believe. It is absurd indeed, as he can force anyone to believe with one command, but he gave freedom of choice to his creation. So, how can we imagine that this God ordered groups like ISIS, or any Muslims for that matter, to coerce non-believers into Islam? From the holy scriptures it is obvious that belief is a matter of choice in Islam. Likewise, those who do not believe have the right to live, just like all believers, and only Allah, and not groups like ISIS, will judge them in the hereafter, versus in this life.

Transcript of Swearing my Bayat to the Islamic State in Fallujahvideo:

Text: The U.S.-led invasion of Iraq alienated thousands of Iraqis throughout he conflict.

The Americans raided us and took us all [living in the area].

It’s like, those who are in my father’s house… I’m in the field.

It’s close, the neighborhoods are close to each other.

They gathered the whole [group of us] in a single house.

We didn’t know who they brought, who they let go, and who they didn’t.

As you know, our eyes were blindfolded.

We couldn’t tell who was next to us, or who they set free [from among us].

The next thing we know is that we’re at the farm, from there to Camp Tariq.

We stayed in Camp Tariq for a month.

Then they took us to Bucca.

TEXT: Abu Bassim, a poultry farmer and father of six, was imprisoned in Camp Bucca in 2006 for a year. Many who later joined ISIS met in Camp Bucca.

TEXT: Abu Bassim claims not to be one of those. He was released in 2007.

When someone goes back to his family and children, it leads to happiness.

Most of my brothers are members of the Iraqi security forces.

I was their bodyguard.

When ISIS took over the area, ISIS arrested me in Fallujah.

They put me in prison for 19 days. ISIS prison is an assured death.

Honestly, you can’t refuse or say no. You can’t, because it’s not in your hands.

We didn’t know what swearing bayat meant [the ISIS pledge of fealty].

They came to us with masks covering their faces.

There were 200 prisoners in the hall.

So they come to you. He speaks and you speak after him, and then it’s done.

[My family] knew that I’m in Fallujah, but they didn’t know whether I was alive or dead.

TEXT: Abu Bassim was put to work in the housing department for ISIS.

I was responsible for the families that came—the displaced families.

I had no affinity with them [ISIS].

For example, a family would come, asking for a place to live.

I would open a house for them to live in.

They were empty houses from families who fled the bombardment, or [families who] were in the military.

There was no good treatment.

There was hunger, no services and no food.

They carried out executions in a lot of places.

Of course [the people] were afraid of ISIS.

TEXT: Abu Bassim was with ISIS until the liberation of Fallujah in 2016.

I tried [to escape], but you can’t escape.

They are in full control over the escape routes, so you can’t get away.

Our religion is what we grew up on. Nothing changed in it.

But they are different from us.

We have no affinity with them [their manipulated version of Islam].

TEXT: Abu Bassim was arrested by Iraqi security forces in Ramadi, and prosecuted for jining a terrorist group.

TEXT: Abu Bassim claims he had no choice in joining ISIS, and now advices others not to join.

This prison—it’s the end of life.

We didn’t see anything [good] of it [from ISIS].

Don’t come to this path and end up the same way we did.

THE TRUTH BEHIND THE ISLAMIC STATE

Sponsored by The International Center For the Study of Violent Extremism www.icsve.org