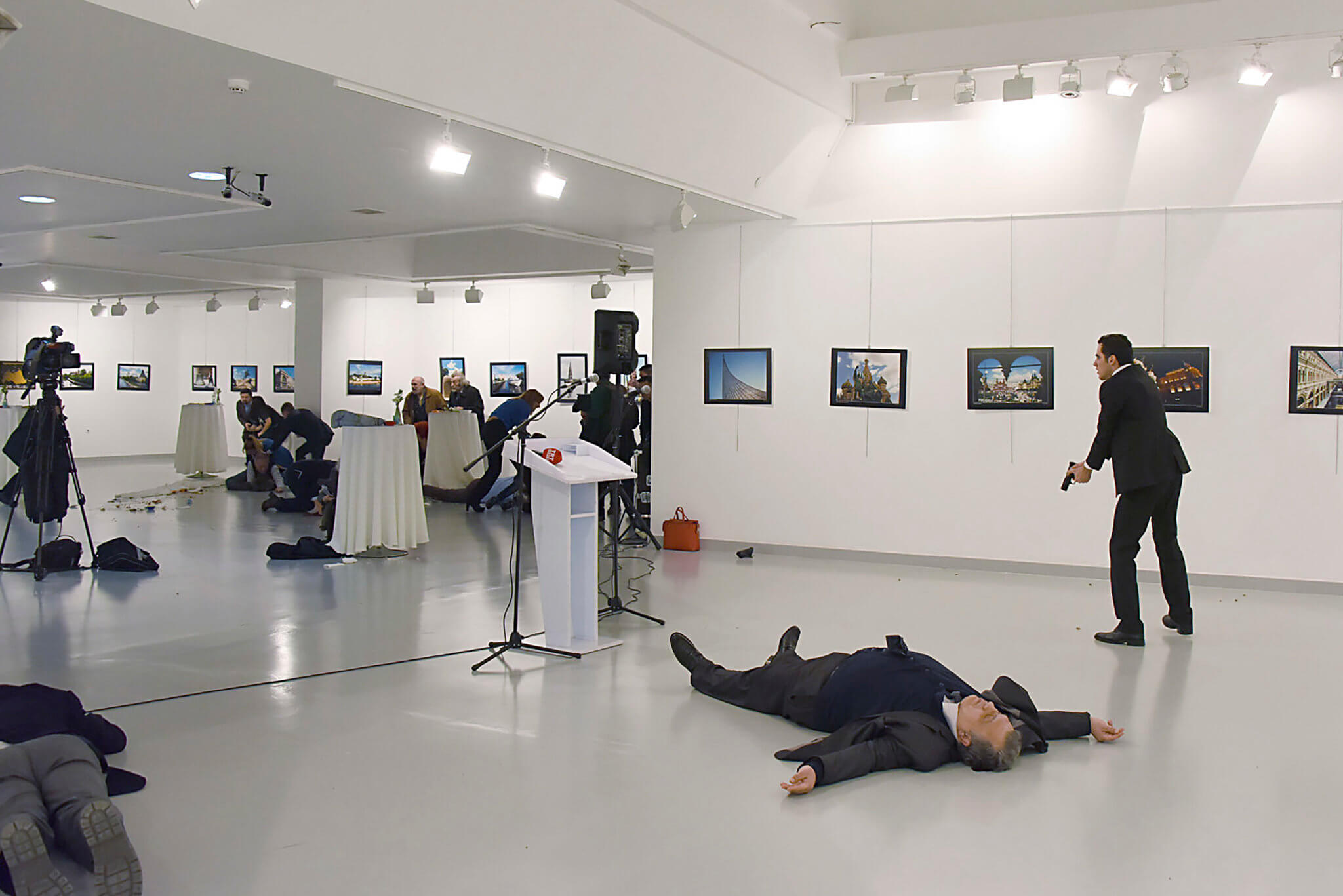 The Russian Ambassador to Turkey, Andrey Karlov, was shot and killed in an art exhibit event December 19, 2016 in Ankara, Turkey. Mevlüt Mert Altıntaş, an off-duty Turkish police officer entered the art gallery by using his police ID and shot the Ambassador approximately ten times from behind as he addressed the crowd. As the Ambassador dropped to the floor his assassin shouted out the now too familiar jihadi mantra, “Allah-u Akbar, God is Great!” and following in Arabic “We have made an oath to the Prophet to die as martyrs in jihad, as I obey now! This is a revenge for Syria and Aleppo!” He continued in Turkish saying “Do not forget Aleppo, do not forget Syria! (Repeating this twice). As our homes are not safe, you will not taste security at your homes! I will only leave here dead! Whoever has a part in this tyranny, they will pay for it one by one; they will die!”

Clearly Altıntaş identified himself with the Syrians dying in their homes and believed he was about to die as a jihadi “martyr ‘for them. While his direct ties with a terrorist organization has not yet been established, his speaking of revenge in behalf of Aleppo would likely tie him with Jabhat al-Nusra (officially affiliated with Al-Qaeda), although his ties are likely inspirational rather than direct as any operational ties would likely have come under the radar of Turkish intelligence.

Anti-Russian sentiment in Turkey has been extremely high during the last weeks as several hundred civilians were reported dead under the Russian bombardments of Aleppo, leading to demonstrations against Russia both on the streets and in front of the Russian Embassy. The largest of these were organized by the AKP youth through social media with banners and pamphlets distributed and advertisements condemning Russia placed in public—with no government opposition to such activities.

This happened in conjunction with a now four-year long history of President Erdogan and the AKP government both openly and covertly supporting jihadi terrorist organizations fighting the Syrian regime, in particular Jabhat al-Nusra, but also ISIS, who were allowed to recruit, move arms and gain logistical support including procuring medical aid for their fighters inside Turkey. The scale of these groups’ operations was often very obvious to the population—occurring in plain sight. For the years 2014 and 2015, there was not a single planned counterterrorism operation against any of the radical jihadist terrorist organizations in Turkey. Now, it seems the ruling AKP’s soft approach towards groups like ISIS and al-Nusra to freely recruit and be active inside Turkey as battles raged in neighboring Syria, have aided parts of the Turkish population to resonate with their virulent ideologies. Several hundred Turks were recruited to Syria by al-Nusra and ISIS and those who returned home were not investigated in any manner.

Altıntaş, who has no known jihadi record, worked for the Ankara Police Department riot police division and had been assigned in an armed capacity to protect President Erdogan and several other AKP rallies in Ankara in the past. His superiors evidently had not detected, or seen fit to reign in, his jihadi leanings, or even more scary—may have supported his views. This lack may be a result of the July 15, 2016 coup attempt, in which over 35,000 police officers and administrators were fired from their positions in the most critical departments: counterterrorism, intelligence, SWAT, organized crime and riot police. Furthermore, almost 20,000 experienced police officers were purged and over 8,500 were imprisoned. No one left may have been experienced enough to notice, or act, in Altıntaş’s case, given these purges and imprisonments have greatly diminished Turkey’s counterterrorism and security capacities and efforts to its lowest level in history. Indeed, in the last four days, two suicide bombers in Istanbul and Kayseri alone, killed over three dozen police officers.

The worsening security situation in Turkey open the possibility of jihadi battles occurring in Syria threatening to spill over into Turkey. Turkey has played a dangerous game these past years, fueling jihadi terrorist groups to oppose Kurdish fighters and now it seems that this strategy is turning back on itself. Open and free recruitment and indoctrination activities of radical jihadist terrorist organizations in Turkey alongside the warm and welcoming approach of Turkey’s ruling AKP combined with the conflicts in Syria have facilitated the spread of jihadi ideologies inside Turkey faster than ever. This situation has created a large volume of ISIS and al-Nusra sympathizers among the general population, as well as among government cadres and pro-AKP youth. No wonder a Turkish police officer was also caught in the grip of such ideologies and apparently acted in sympathy with such groups. While he was likely a lone wolf acting on his own—he appears fueled by the prior weeks hatred against Russia and the warm welcome of radical jihadist groups active inside Turkey—so much so, that he took it into his own hands to shoot and kill the Russian Ambassador as an act of revenge for Russian bombings in Aleppo. Now it remains to be seen what response will come from Russia.