Buy the book on Amazon.com 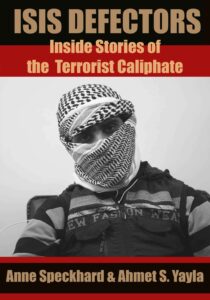 The authors hadn’t intended to put themselves in danger but that’s what happened as they interviewed an unprecedented thirty-two battle-hardened defectors about the gritty details of life inside ISIS. With unparalleled breadth, depth and access, ISIS Defectors: Inside Stories of the Terrorist Caliphate offers a compelling view of ISIS from men, women and teens now in hiding, having escaped the most brutal terrorist group in recent history.

They were fighters and commanders, wives of fighters—living and dead, female enforcers, and Cubs of the Caliphate, including a child who volunteered and almost got sent as a suicide bomber at age thirteen. They discuss motivations for joining and defecting, and delve into news-making topics: coercing children to become suicide bombers; brides of ISIS and the brutal female morality police; Yazidi and Sunni sex slaves held in massive compounds where fighters use them at will; privilege bestowed on foreign fighters; prisoners kept for the sole purpose of beheading by new inductees. The defectors shared a startling array of photos and videos from personal cell phones and many are included in the digital version of this book.

An unexpected subplot unfolded when Dr. Yayla found himself tailed by ISIS, and Dr. Speckhard barely missed two suicide attacks. But the authors are not deterred. As counter-terrorism experts with specialties in research psychology and law enforcement, they see ISIS as more than a terrorist group. ISIS is a brand that falsely sells dignity and purpose, justice and the restoration of glory—to vulnerable recruits—masterfully recruiting some 30,000 members online. It’s the biggest influx of foreign fighters to a terrorist haven in history.

Using the defectors own words, the authors intend to break the ISIS brand. They have videotaped these interviews to edit them into short clips, memes and tweets for an online counter-offensive. Speckhard and Yayla state that disillusioned ISIS defectors are the most influential tool for countering ISIS propaganda. The persuasive voices of these defectors and the resulting videos will soon invade ISIS chat rooms where their propaganda thrives. With over one thousand active investigations in the U.S. across all 50 states, discrediting ISIS ideology is essential to stopping it.