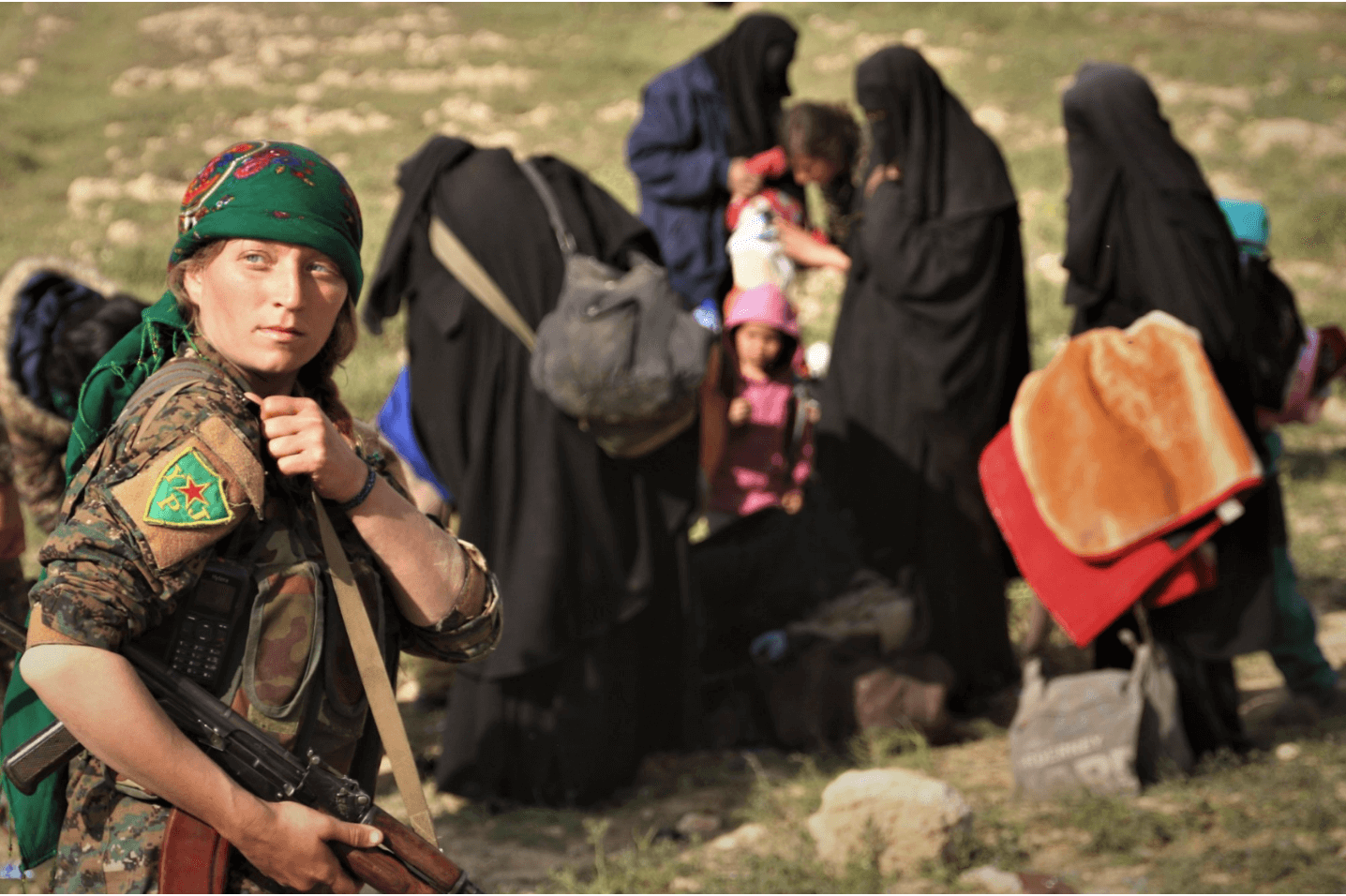 In 2012, the Northeastern Syrian area referred to as Democratic Federation of Rojava – Northern Syria (also as the Autonomous Administration of North and East Syria – NES), which consists of the sub-regions of Afrin, Jazira, Euphrates, Raqqa, Tabqa, Manbij, and Deir Ez-Zor became autonomous as a result of the the wider Syrian conflicts including the Syrian Arab Spring and revolt against Bashar al Assad’s governance, followed by the rise of terrorist groups that overtook much of Northern Syria. The defacto autonomous government of Rojava is secular and democratic, and claims to be inclusive of all religions and ethnicities. It is following a socialist, ground-up philosophy emphasizing local representation and self-governance, referred to as a democratic confederalism: a form of liberarian socialism that emphasizes decentralization, gender equality and the need for local governance through semi-direct democracy. Likewise the governance of Rojava is feminist in the sense that all important government posts are filled by both a man and a woman—as is the presidency. While currently self-governing, Rojava is not currently officially recognized as an autonomous entity by the government of Syria or any international state or organization. Rojava is not seeking to cede from Syria. Rather, its officials have been in negotiations to establish itself as a semi-autonomous region of Syria, governed by those who live there.

The letter below written by Aldar Khalil, the current male president of Rojava concerns international negotiations and the fate of Syrian Rojava as a semiautonomous region. It was submitted for publication in Homeland Security Today via the International Center for the Study of Violent Extremism (ICSVE), an international research center fighting terrorism, which has been working over the past year in partnership with the government of Rojava, interviewing ISIS prisoners in the region on behalf of ICSVE’s Breaking the ISIS Brand Counter Narrative Project. – respectfully submitted – Anne Speckhard, Ph.D. The views expressed by the author do not necessarily reflect the views of ICSVE and its researchers.

The terrorist organisation, Daesh, has inflicted much damage on Syrian society. In addition, the threat posed by Daesh was not limited to a specific geographic location, but on the contrary, Daesh posed a direct threat to the region and the world. Therefore, the general strategies of all countries currently take into account the existence of Daesh and the unlimited threats it has posed over it’s lifetime, particularly in 2014-2017 when it was most powerful.

Today, with the final battle against Daesh is being fought and victory over the terrorist organisation is getting closer, it is necessary to recognise the fact that this historic victory would have not been achieved without the presence of the strong will of the multi-ethnic and multi-religious people of Rojava who believe in the idea of democracy, the democratic nation project, co-existence and the need to consolidate the basic principles of peace and stability in Syria. With the end of Daesh, it can be said that there is, for the first time in the modern history of the region, a genuine determination to create an environment for finding stability in Syria, despite the difficult circumstances, the complexity of rebuilding and obstruction that exists by some parties, which insist on creating chaos as a guarantee for their interests in Syria. Turkey here is a prime example.

In these circumstances and at this important stage of the region’s history, one can observe an important action or development, related to the extent of insistence on the solution and stability by the components of north and east of Syria. At a time when Daesh was a threat to Syria, the region and the world—conducting, ordering and organizing attacks from inside Syria on many Western cities, dozens of sons and daughters of the people of our region died fighting this horrific terrorist organisation, thereby saving the world from their heinous threat. At the same time when these efforts were made, there were some negative efforts in the mechanism of dealing with the positions and principles adopted by our people, who seek a solution and stability in Syria, including coming to an end of Daesh terrorism. In other words, at a time when Daesh was threatening the world, and our people were dying fighting them, the future of  our people were being dealt with outside of any framework in which the solution in Syria was being discussed. This is evident in the efforts of exclusion from all rounds of negotiations on Syria and in all the platforms that have taken place during the past years, such as Geneva and Astana. Is it reasonable for this to happen?

All the powers that want a solution in Syria should push things towards paths that guarantee real and enduring solutions, and make efforts to stand with the powers and components that have proven themselves in their brave fight against Daesh whie also managing to govern during a crisis in a democratic manner. The people of north and east of Syria, beg Western powers to support their quest for freedom and democracy to serve the aspirations of the Syrian people and continue to achieve democratic structures, which guarantee stability and peace in our region. In addition, the democratic efforts of the governments that arose in north and east of Syria must be now seen as semi-autonomous national and responsible efforts, as well as efforts that insist on a post-conflict solution in Syria that achieves actual change through a dialogue with all Syrians.

The Syrian-Syrian dialogue and consensus on the solution must be supported by the powers that believe in a solution in Syria. The obstruction of dialogue between Syrians or the discussions without the participations of all Syrians, including the forces that bravely defeated Daesh, would further aggravate the situation and could open the way to new conflicts, especially with the presence of parties that are still far from owning their own free will, and with the presence of other parties that count on internal conflicts.

Here, the dialogue with Damascus to serve the solution in Syria is not wrong. On the contrary, the will of the administration of the north and east of Syria, with the changes that it achieved on the ground, could lead an important project of transformation in Syria by reaching results with Damascus. In other words, dialogue and negotiation will be based on the need for change and not on the other aspects that some are trying to advocate, such as retreat from the democratic project and the gains made on the ground, including the defeat of Daesh, as well as the unified vision in the fight against terrorism with coalition partners.

The end of Daesh is the beginning of a new phase that requires support as well as exerting all efforts to develop a political and peaceful solution in Syria. The U.S. led coalition, which succeeded in achieving the historic victory over Daesh, has made tremendous efforts and sacrifices that must not go without being a historic turning point in Syria and the region. The victory that has been achieved must be followed by efforts to represent the will and efforts that were made in the fight against Daesh, but in a manner that will support our people’s project in finding a democratic solution in Syria.

We ask the U.S. people to stand with us in allowing and supporting us to continue to self-govern our area, striving toward the highest standards of human rights, equality for all—including women, and governing by democratic principles while we continue to stamp out terrorism in our region. We fought hard and lost many of our sons and daughters in the fight against Daesh. Now we ask for support in becoming a semi-autonomous part of Syria, self-governing and continuing our partnership with the U.S. and Western nations to stamp out terrorism.

You can’t forget
Recent Posts
Categories
ICSVE welcomes partners and donors interested in fighting violent extremism.
Contact us to learn how we can work together.
Copyright ICSVE 2023 - All Rights Reserved
Back To Top