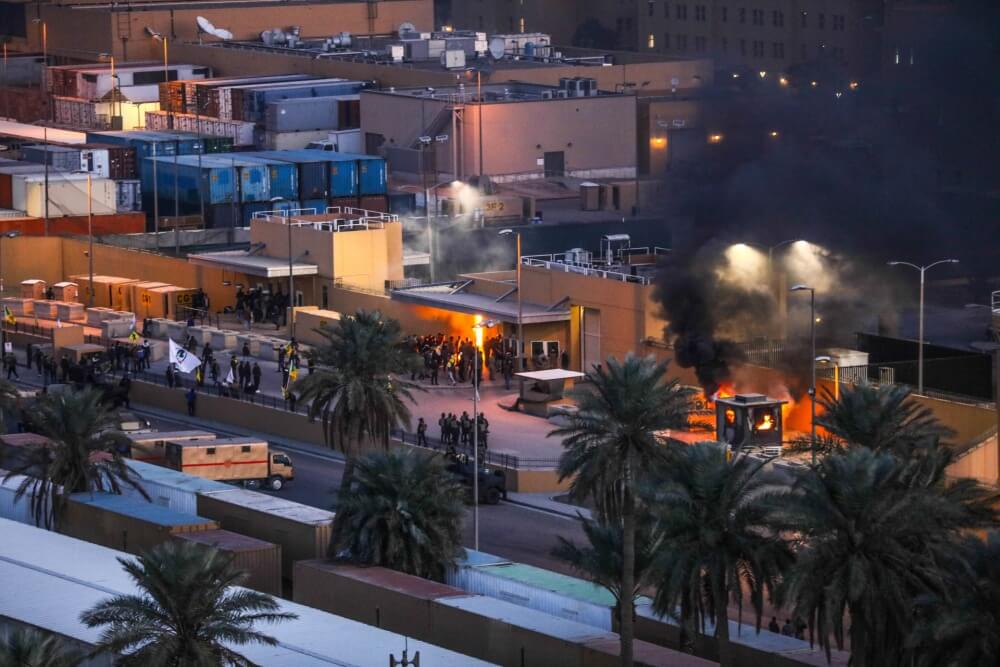 The U.S. Embassy in Baghdad was overrun today by hundreds of pro-Iranian militia demonstrators who were seemingly let into the embassy compound area without restrictions. There the demonstrators smashed the guard posts on U.S. embassy’s outer perimeter, climbed the walls to destroy security cameras, set fires and finally breached the first layer of security at the embassy compound, damaging a reception area before being expelled by Iraqi security forces.

These actions were all in response to U.S. airstrikes carried out against Kataib Hezbollah, an Iranian-backed militia, which the U.S. blamed for recent rocket attacks, including one targeting a military base in Kirkuk last week that killed an American defense contractor. Twenty-five Kataib Hezbollah militia members were killed in the U.S. airstrike and more than 50 injured, but the political ire sparked by attacking a militia inside Iraq was far greater than just these deaths.

Thousands of angry supporters of an Iranian-backed militia besieging the U.S. Embassy in Baghdad in retaliation strongly signals the dire state of affairs between the U.S. and Iran as that relationship is played out in proxy conflicts inside Iraq. That these protesters were even able to get to the embassy, which is located on a barricaded and guarded street, raises one question, with the second being why there was a slow and inadequate response by the Iraqi police who are charged with protecting all diplomats and their posts inside Baghdad.

Secretary of State Mike Pompeo said the same in reference to the airstrikes against the Iranian-backed militia: “This was a defensive action designed to protect American forces and American citizens in Iraq, and it was aimed also at deterring Iran. This was an Iranian-backed rogue militia acting to deny the Iraqi people their basic sovereignty.”

While the U.S. Ambassador is said to have been away for the holidays and much of the embassy staff was reported as evacuated while those who remained huddled in a small safe room, the Defense Department has already dispatched two Apache helicopters and a “small contingent” of Marines to reinforce security at the embassy.

Meanwhile, President Trump blamed Iran for “orchestrating an attack” on the embassy. However, this total breach of security, putting embassy staff and the embassy as a whole at risk, raises pressing questions about current U.S. foreign policy, or lack thereof, in dealing effectively with Iran in general, Iran as it is operating in Iraq, and with Iran in concert with our European allies, and whether or not the U.S. Embassy and our 5,000 U.S. troops in the country can operate safely and are even welcomed in Iraq.

Many mistakes have been recently made in the region, such as Trump’s unilateral decision to withdraw from the Iran nuclear deal, separating the U.S. from its European allies without finding a more effective way to curb Iran’s nefarious actions. Likewise, a precipitous withdrawal from Northern Syria also strengthened Iran’s hand in the region. Now the United States faces growing isolation in Iraq, with politicians and security officials unsure if they want to stand up to Iranian-backed protestors on behalf of U.S. safety.

Today the militia supporters chanted slogans previously heard in the Tehran hostage crisis including “Death to America!” and carried signs telling the U.S. to get out of the region. Likewise, Kataib Hezbollah hung their flags on the embassy compound walls while their militia vowed to force the embassy to shut down. The militia supporters also set up tents for the night beside the embassy gates, vowing to stay until all U.S. troops and diplomats leave Iraq.

While the Iraqi security forces did finally intervene, erecting a steel barrier at the smashed gate into the compound’s reception area and forcing the protesters to leave the immediate area, other protesters stormed and burned the embassy’s second reception gate. Likewise, one member of the force that guards the zone’s checkpoints was photographed helping the militia supporters smash the bulletproof glass at the embassy reception gate.

I have been to the U.S. Embassy in Baghdad many times since it was built and I have also been present in other U.S. embassy lockdowns. There are always barricaded safe rooms and armed guards, but that particular embassy is a fortress and sits on a heavily guarded street that is normally impossible to approach without going through armed checkpoints. How they were able to approach the embassy at all is a very important question.

The last time I was in Baghdad, a similar security alert was raised and an Iranian-backed militia fired one missile toward the embassy. I was sitting outside at the Babylon hotel on that occasion and heard the embassy alarms warning everyone to go inside. That missile landed at the tomb of the unknown soldier and injured no one.

Today, as well, no American personnel were injured, but the fact that Iranian-backed militias were able to previously fire near the embassy from Baghdad bridges and that they can storm into a normally closed-off street and are not immediately met with Iraqi helicopters, storm troopers and water hoses is very telling.

Following this security breach, President Trump tweeted from his Mar-a-Lago estate in Florida: “Iran killed an American contractor, wounding many. We strongly responded, and always will. Now Iran is orchestrating an attack on the U.S. Embassy in Iraq. They will be held fully responsible. In addition, we expect Iraq to use its forces to protect the Embassy, and so notified!” Likewise, he appealed to the Iraqi people: “To those many millions of people in Iraq who want freedom and who don’t want to be dominated and controlled by Iran, this is your time!”

Acting Iraqi prime minister Adel Abdul Mahdi also tweeted: “While we condemn the U.S. air strikes on Iraqi military units, and acknowledge that symbolic funeral marches for the martyrs is a solemn act of remembrance, those taking part must stay away from diplomatic buildings and compounds.” He later added: “Iraqi security forces will respond to any act of aggression or harassment against foreign embassies in Iraq, and those responsible will face the full force of the law.”

Douglas A. Silliman, the former U.S. ambassador to Iraq, reflected that these protests appear as “pro-Iranian elements to try to take advantage of what they’re going to define as a disproportionate American response to the killing of an American military contractor and to Iraqi police officials.” According to Ambassador Silliman, “This is not a massive popular anti-American demonstration,” but instead “appears to be an attempt by Iran and pro-Iran factions in Iraq to take pressure off of themselves” because massive demonstrations in the past few months “have been anti-Iranian and anti-government corruption and anti-militia.” Indeed, Iraq is struggling, and it remains important to see if the U.S. can play any supportive role to help them curb both corruption and mafia-style Iranian-backed militias.

It should be noted that it was an Iraqi army commander, not the police, who finally drove the militia supporters out of the embassy reception area, while diplomats huddled out of reach, locked in a safe area. Now it remains to be seen what this president, infamous for his often impulsive and less-than-coherent foreign policy, will do to try to repair the relationship in a country already reeling under violent demonstrations over country-wide corruption and rife with uncontrolled mafia-style Iranian-backed militias. If the president’s precipitous actions and recent events in Northern Syria are any guide, and our foreign policy continues to be erratic and not clearly thought out, we may soon be losing yet another ally in our battles against groups like ISIS, and watching an entire region erupt in flames.

Anne Speckhard, Ph.D., is Director of the International Center for the Study of Violent Extremism (ICSVE) and serves as an Adjunct Associate Professor of Psychiatry at Georgetown University School of Medicine. She has interviewed over 700 terrorists, their family members and supporters in various parts of the world including in Western Europe, the Balkans, Central Asia, the Former Soviet Union and the Middle East. In the past three years, she and ICSVE staff have been collecting interviews (n=217 and counting) with ISIS defectors, returnees and prisoners as well as al Shabaab cadres (n=16 and counting) and their family members (n=25) as well as ideologues (n=2), studying their trajectories into and out of terrorism, their experiences inside ISIS (and al Shabaab), as well as developing the Breaking the ISIS Brand Counter Narrative Project materials from these interviews. She has also been training key stakeholders in law enforcement, intelligence, educators, and other countering violent extremism professionals on the use of counter-narrative messaging materials produced by ICSVE both locally and internationally as well as studying the use of children as violent actors by groups such as ISIS and consulting on how to rehabilitate them. In 2007, she was responsible for designing the psychological and Islamic challenge aspects of the Detainee Rehabilitation Program in Iraq to be applied to 20,000 + detainees and 800 juveniles. She is a sought after counterterrorism experts and has consulted to NATO, OSCE, foreign governments and to the U.S. Senate & House, Departments of State, Defense, Justice, Homeland Security, Health & Human Services, CIA and FBI and CNN, BBC, NPR, Fox News, MSNBC, CTV, and in Time, The New York Times, The Washington Post, London Times and many other publications. She regularly speaks and publishes on the topics of the psychology of radicalization and terrorism and is the author of several books, including Talking to Terrorists, Bride of ISIS, Undercover Jihadi and ISIS Defectors: Inside Stories of the Terrorist Caliphate. Her publications are found here: https://georgetown.academia.edu/AnneSpeckhardWebsite: and on the ICSVE website http://www.icsve.org