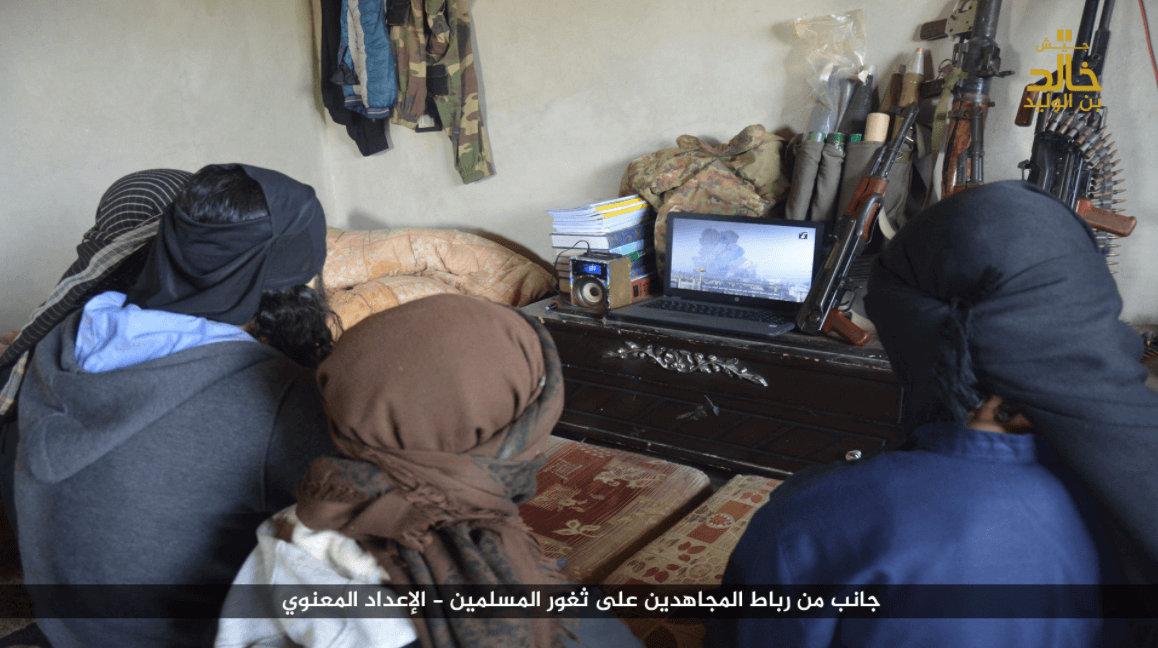 Historically speaking, compelling narratives and messages have always served as a crucial means for violent extremist groups to attract followers to their cause. In this regard, terrorist groups like ISIS have managed to attract thousands of fighters to the conflict zones in Iraq and Syria.[i] Their mix of narratives, pointing to real or perceived grievances, provides a unifying ideological edifice for vulnerable populations to rally around their cause. Groups like ISIS invoke key messages of duty, belonging, purpose, honor, adventure, victimization, and personal identity. Among others, they also employ propaganda techniques of scapegoating (e.g. transferring blame to others), affirmation (e.g. presenting questionable information as facts), omission (e.g. leaving out key points of a message) and manipulation (e.g. Islamic scriptures).

Violent extremist groups rely on broad targeting techniques to attract large audiences, while also humanizing their propaganda attempts to inspire behavioral change. For instance, in the case of ISIS, the promise of an Islamic State was attractive to many who suffered from sectarian discrimination, marginalization, unemployment and under-employment, and poor state governance. The Internet and social media have further reinforced and accelerated the process of radicalization among vulnerable populations both by creating opportunities for extremist groups to easily operate and spread their propaganda in such environments and creating echo chambers of frustration and grievances. Social media’s immediate feedback mechanisms also allow such groups to hone in on and swarm around those who respond to their terrorist propaganda by liking, sharing, or otherwise endorsing it. In this way, terrorists can pinpoint their recruiting to the audiences that are already resonating to their messages.

In response to an overwhelming quantity of propaganda material available online, counterterrorism, security, and CVE professionals have relied on a number of reactive and proactive measures to reduce or mitigate the supply of extremist content. The first line of defense has been, and may always be, kinetic and law enforcement-based, namely physically eliminating locations of ISIS media points and arresting those who are creating and pushing out such content. On the soft-power side, however, reactive measures are focused on removing extremist content online, manipulating search engine results to make it more difficult to find extremist content online, or intentionally blacklisting or dropping key words of web addresses from search results. Comparatively speaking, the more proactive responses include a focus on creating counter-narratives to delegitimize and undermine the appeal of extremist propaganda in the eyes of the target audience.[ii] Such measures are primarily designed to diminish exposures to terrorist content and enhance digital literacy and critical thinking among those accessing and consuming violent extremist content. They also serve to challenge and delegitimize extremist narratives and the groups relying on them, both offline and online, as well as empower vulnerable populations and those who care about them (e.g. parents, teachers, counselors, etc.) to recognize and read through violent extremist groups’ narratives and recruitment propaganda in a way that allows them to dismiss it for the false lies it represents.

Despite the territorial defeat in Iraq, and much of Syria, ISIS is far from being uprooted. The group’s power has shifted from controlling territory to launching insurgent-style attacks, marked by a mix of international, regional, and local insurgency style attacks.[iii] While ISIS’ Internet and social media presence is diminished, the group continues unabated in the digital “Caliphate,” with new video content and propaganda materials still being circulated. In addition, they still are managing to lure upwards of 100 followers every month to come to Syria and Iraq,[iv] not to mention those being groomed for attacks at home.

Against this backdrop, the International Center for the Study of Violent Extremism (ICSVE) organized a conference on Nov. 30, 2018, in Brussels, Belgium, on the topic of Breaking the ISIS Brand: Understanding Trajectories into and out of Terrorism – Using Counter Messaging to Prevent and Intervene in Terrorism and Violent Extremism. An innovative aspect of the conference involved displaying posters of more than 30 ISIS foreign fighters and of ISIS wives telling their reasons for traveling to ISIS as well as their reasons for now denouncing the group. These posters artistically expressed the experiences of individuals from Europe, the Balkans, Iraq, and Syria, among others, and told in first-person vernacular about their having been deceived by and living inside the so-called Islamic State. These posters were designed to stimulate critical thinking about those involved with ISIS as well as visually communicate the lure and deceit of terrorist groups like ISIS. While they were unveiled at the conference, their real use is in the digital world for Facebook, Instagram, and other social media campaigns via the Internet to try to Break the ISIS Brand, that is, to delegitimize the group and its ideology by using insiders to denounce the group as they speak about their own vulnerabilities and motivations for joining and their tragic experiences living inside an un-Islamic, overly brutal and corrupt group.

In seeking to achieve the objective of successfully targeting extremist content and propaganda, both offline and online, the conference gathered a number of high-level law enforcement, security, and CVE professionals to discuss ideas and actions that could have potential to generate realistic, achievable, and measurable solutions to the pressing issue of continued ISIS and other terrorist groups online and offline recruitment. Presenters and participants stressed the ability of ISIS and other extremist groups to still successfully leverage social media platforms to spread their messages. As discussed during the conference, the collapse of the so-called Islamic State may be an impetus for the group to amplify the scope, reach, and speed of ISIS recruitment efforts as they search for mentally disturbed and aggrieved individuals to mount attacks at home. In this regard, Gilles de Kerchove, a senior European Union (EU) official and the EU Counter-Terrorism Coordinator, emphasized the importance of removing extremist content online while also developing both alternative and counter-narratives to critically delegitimize extremist rhetoric. With the collapse of the so-called Caliphate, he urged focusing on countering extremist narratives to prevent the spread of dangerous ideas, especially domestically, to curb the potential for homegrown terrorism.

Gilles de Kerchove stated, “Why do I believe in initiatives like this one [Breaking the ISIS Brand by ICSVE]? First, because that’s the main purpose of the exercise. It’s critical to delegitimize the rhetoric of al-Qaeda and Daesh and show the true nature of these enterprises. We need of course, what ICSVE is doing, the interviews, the counter-narrative part showing the truth. At the same time, we need our own narrative, not just to counter [their narrative] but also to show our own values.”

He went on to explain to the audience and the ICSVE organizers, “Through these [ICSVE] interviews you have also insight into the drivers, what led these people to this crazy ideology. This is a perfect tool for prevention, for prevention in schools and disengagement programs as well. Those are all the reasons I was so eager to accept your invitation.”

The growing recognition of counter-narratives and alternative narratives, such as the ones produced by ICSVE, was also noted by the deputy director of Belgium’s OCAD (Organ Voor de Coordinatie en de Analyse van de Dreiging), Gert Vercauteren. In addition to stressing the importance of reintegrating and re-socializing returnees from the conflict zones in Iraq and Syria, he highlighted the need for counter-narratives to “sow seeds of doubt” among vulnerable and at-risk for radicalization individuals to depict the harsh realities of belonging to a violent extremist group and introduce alternative approaches and behaviors to counter the appeal of extremist propaganda. He also stressed their utility as a powerful prevention and disengagement tool that could be used in different settings, especially in schools by teachers to inoculate against violent extremist groups propaganda. Additionally, he referred to the easy accessibility of the ICSVE Breaking the ISIS Brand Counter Narratives subtitled in most of the languages in which ISIS recruits and their utility because they rely on insiders simply telling their stories in the same vernacular to which those they are trying to protect are likely to resonate.

In addressing their practical application and utility, Beatrice Bouharmont from the Belgian National Police in Liege stressed their paramount importance especially in helping law enforcement, social workers, and students fight the appeal of extremist groups and propaganda. Three ICSVE counter-narrative videos from Belgians who had gone or tried to go to Syria, who had been interviewed for the project, were shown during the event as well as a heart-rending one of a 7-year-old Belgian child held in detention in Syria saying she wants to come home.

This event and similar gatherings serve as launching pads to further grow our understanding of extremist propaganda and the potential effect of returnees from the conflict zones in Iraq and Syria. They also serve to constellate ourselves around tasks, issues, and questions that have surfaced recently with respect to the utility of the use of counter-narratives in the fight against violent extremist rhetoric and  .[v] The conference helped to further refine the role of the message, the messaging strategy, and the messenger to ensure their reach to the target audience. The conference also served as a reminder to highlight the importance of “soft-power” measures and factors necessary to inhibit the resurgence of violent extremist actions in our communities. As also noted by the Qatar Ambassador in Brussels, AbdulRahmin bin Muhammad al Khulaifi, whose government hosted the luncheon, the defeat of violent extremism will also require a comprehensive approach that relies on the use of military, political, economic development, and social integration.

The views expressed here are the writer’s and are not necessarily endorsed by Homeland Security Today, which welcomes a broad range of viewpoints in support of securing our homeland. To submit a piece for consideration, email [email protected] Our editorial guidelines can be found here.

[i] Laub, Z. (2016). “ The Islamic State,” Council on Foreign Relations, available at https://www.cfr.org/backgrounder/islamic-state

[iv] The Arab Weekly. (2018). “ ISIS still a threat in Syria and Iraq,” available at https://thearabweekly.com/isis-still-threat-syria-and-iraq

An Analysis of Active-Duty and Veteran Military Members involved in White Supremacist and Violent Anti-Government Militias and Groups: 2017-2022

Prison-Based Radicalization to Militant Jihadism in the Maldives