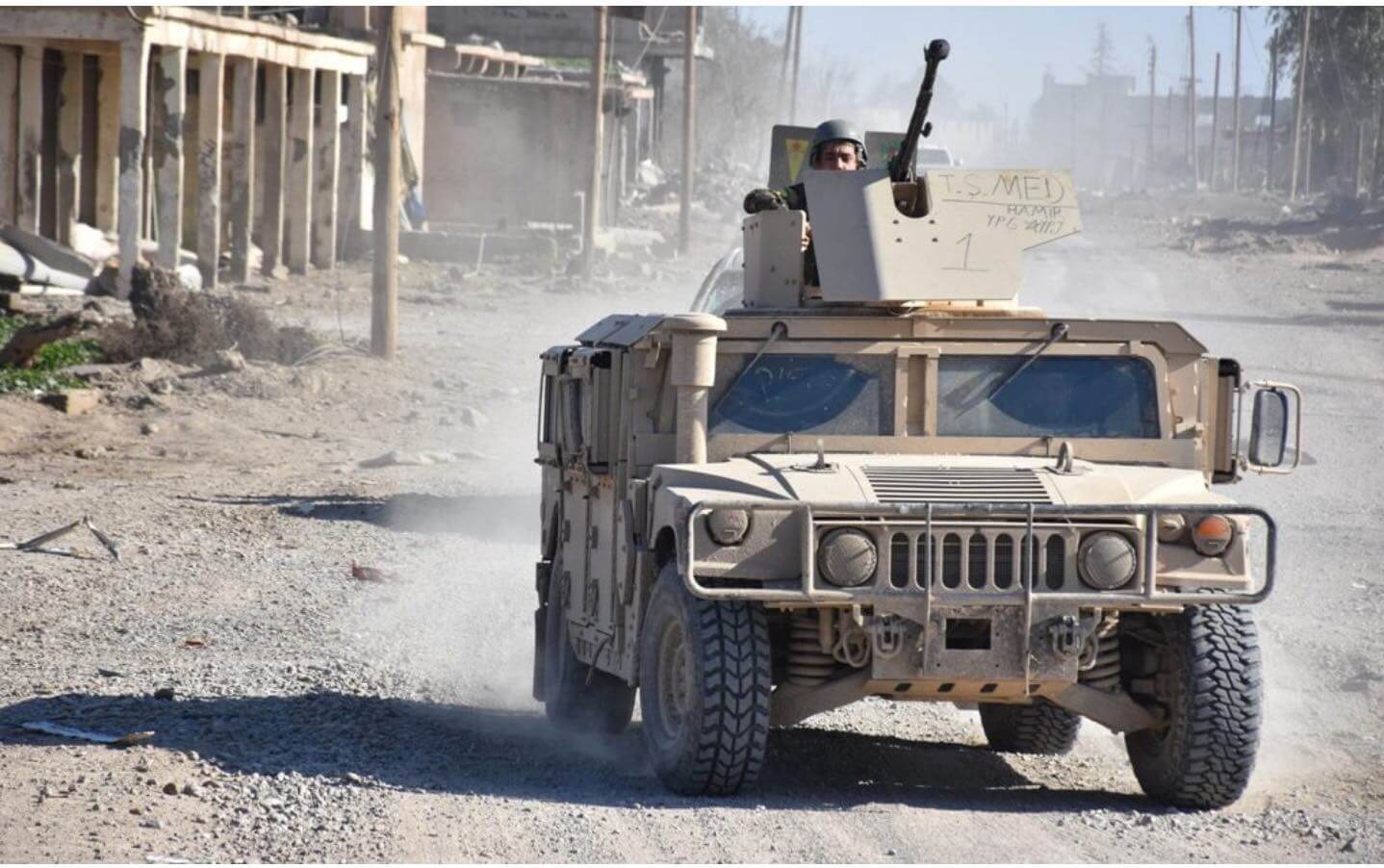 Rojava, Syria – In the past month, Islamic State fighters in Syria (and in Iraq) are increasingly being captured and their numbers are dwindling into the thousands, compared to only two years ago when the group held large swaths of territory in both Syria and Iraq while they ruled their “Caliphate” from Raqqa and Mosul. During these last days of the ISIS cleanup, ICSVE researchers have interviewed 18 captured ISIS prisoners held in YPG-run prisons in Rojava, Syria, one captured only 10 days earlier.

Upon returning to our place of stay, we meet a group of international journalists. One of the TV presenters gets us caught up in the excitement of live TV broadcasting from where we are staying and relates what they saw that day on the front lines only four hours away, though quickly reminding us that we are in a conflict zone – and the perilous war conditions in which journalists and researchers often operate. They and other journalists show us their raw footage of thousands of ISIS men, women and babies coming in from the desert to surrender, while overwhelmed Kurdish security forces pat down fighters, some of whom may be wearing suicide belts, and try to instill order into the chaotic situations.

Sitting together we all discuss our various observations regarding the ambitions of a so-called Islamic Caliphate only briefly realized – albeit inspirational enough to have attracted 40,000 foreign fighters from around the world to travel here to join their project in utopian state-building. Having been present in Syria for some time and closely following the rise and gradual demise of the so-called Islamic State, those present reminisce and debate the life of horror imposed by ISIS, and we also reflect on those observations conveyed to us by those we interviewed this trip, and on other trips, who served and lived under it – memories straight from inside the Caliphate that none of us will ever easily forget.  We discuss ISIS’ legacy of violence and the conflict in Syria and Iraq in general. The tough part lies ahead, all of us agree.

In the past few days alone, hundreds of women, children and the elderly have been attempting to flee ISIS-controlled villages of Susa and Marashida  Syria, with thousands of them remaining stranded. Many ISIS soldiers have either been caught or surrendered to YPG troops although thousands still remain on the run and in hiding, perhaps hoping to reform and strike again another day. A senior YPG counterterrorism official we interviewed, who spoke on condition of anonymity for security reasons, set out a grim scenario for ISIS, namely: “There are only two villages left [that are ISIS-controlled]. ISIS will be gone in less than 30 days.” Yet he is far less confident than President Trump that ISIS is defeated in Syria. He continues, “We need to continue to clean ISIS sleeping cells and those who have embedded themselves among the civilian population. Some cells are here and some in Europe. Some countries [Turkey] don’t want stability here. [ISIS] are not alone. There are people behind them. We will need years to clean them up.”

Indeed, in response to Trump’s December order to withdraw from Syria, Pentagon officials, among many others – experts and government officials among them – have recently raised concern over the re-emergence of ISIS, noting that the failure to maintain a strong military pressure on the group could lead to ISIS regaining its lost territory in Syria within six months to a year following withdrawal. Similarly, the Director of National Intelligence, Dan Coats, has recently stressed how “ISIS will seek to exploit Sunni grievances, social instability, and stretched security forces to regain territory in Iraq and Syria in the long term.”

Tied to the national security agenda of many countries is also the enormous challenge to accommodate thousands of jihadists who have traveled to the conflict zones in Iraq and Syria and now have returned home, with some slipping in and out of Europe rather easily, and others about to be repatriated to prisons already rife with prison recruitment among jihadists as is the case in France, for example. In the sample of 18 ISIS cadres held by YPG in Syria interviewed by ICSVE researchers last week, two of them discussed the ISIS emni, or ISIS’ intelligence arm. One of them, A.M.T, a 35-year old ISIS member from Tunisia, stressed the danger emanating from external ISIS intelligence networks, which are known to send operatives outside the conflict zone and recruit and organize sleeper cells to attack in Europe and globally. Harry Sarfo, an imprisoned ISIS returnee in Germany, had warned of the same a few years earlier citing his and other European ISIS members’ invitation by the ISIS emni to return and attack in Germany.

With ISIS’ territorial defeat in Syria, the question of what happens with U.S. allies, Syria’s Kurds, who fought valiantly against ISIS and lost many doing so, remains uncertain. High-level Kurdish officials shared with us their anxieties over the potential U.S. pullout, which leaves them vulnerable in Syria, and the ensuing geopolitical tug of war between the regime of Bashar al Assad, Turkey, Iran, and Russia. The Kurds are especially concerned over the U.S. troop withdrawal as all of the aforementioned countries, as well as al-Nusra cadres and its newer named adherents (Jabhat Fatah al Sham), have shown passive if not overt support for Turkey and its attacks east of the Euphrates in Afrin, etc. Indeed, Kurdish intelligence insist Turkey has hired former ISIS fighters as mercenaries in those battles. Some political observers on the ground speculate that with Assad’s almost certain victory, and his seeming unwillingness to make any political or military concessions to the Kurds who want a semi-autonomous region, the international community is beginning to show less interest in Syria and wishes to avoid being embroiled in the internal politics of Syrians.

ISIS has been able to command the world’s attention for some time now. While defeated on the battlefield, it has also managed to protect some of its leadership who, fleeing into Turkey and the Syrian countryside, abandoned lesser ISIS cadres to their fates in Raqqa and Mosul, according to ISIS defector interviews conducted by ICSVE. The group is clearly still formidable and likely to continue to discreetly consolidate and strengthen its reach and activities wherever its members have a presence. Likewise, and perhaps most disturbingly, their message of creating a parallel or replacement Islamic form of governance brought in through terrorist violence in the face of failed and corrupt Arab governance still resonates with many. Any military victory in Syria without an effective and enduring political settlement could only mean a potential for terrorist resurgence, sectarian violence and continuance of the vicious violent extremism cycle in the region.