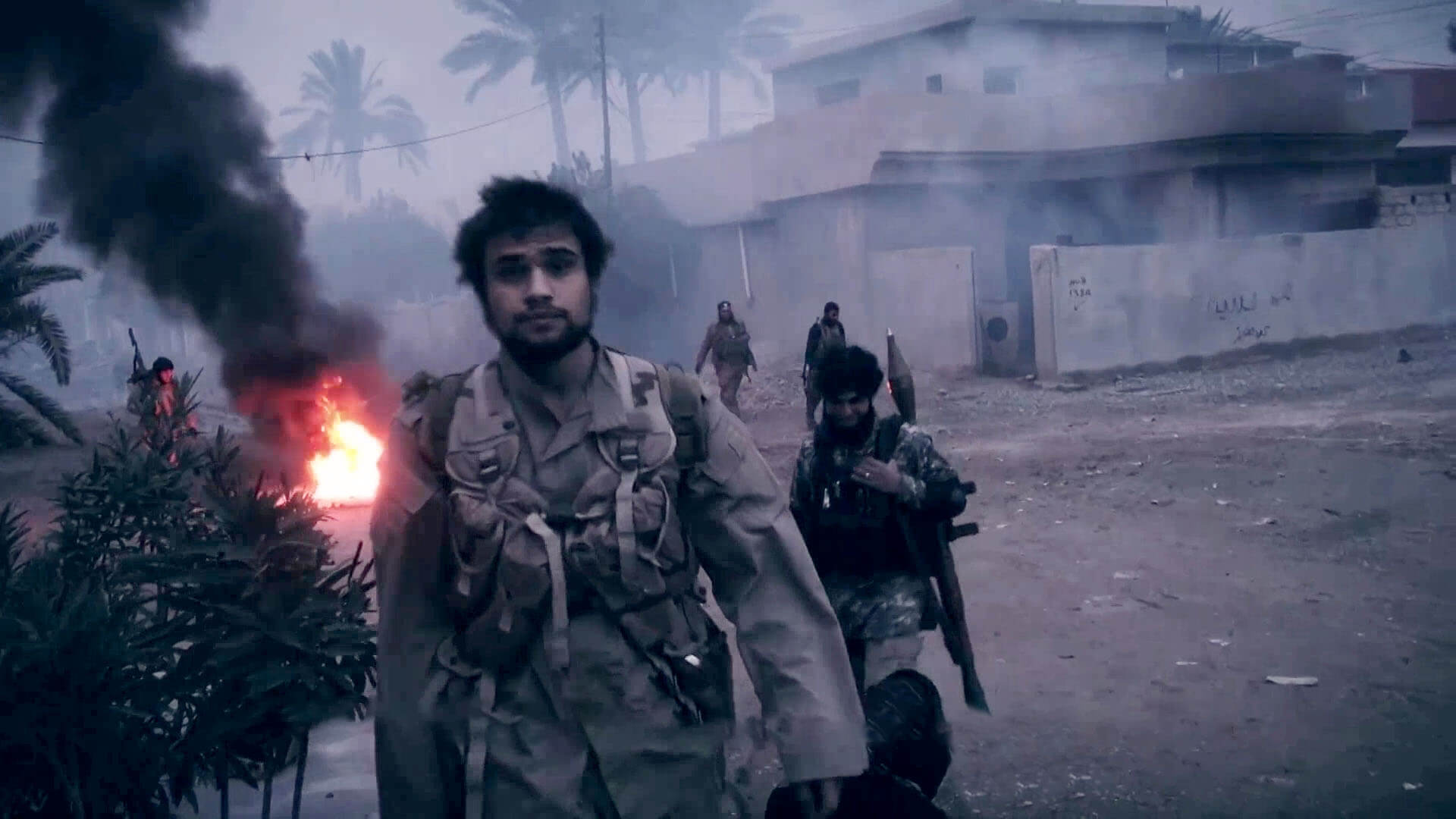 It is Jihad is the 74th counter narrative video in the ICSVE Breaking the ISIS Brandseries. This video features 27-year-old Abu Taha, an Iraqi ISIS guard. Abu Taha was interviewed in 2017 in prison in Baghdad by Anne Speckhard. The video was produced and edited by our ICSVE staff.

Abu Taha, like many of the Iraqis who lived in Mosul at the time when ISIS came into the city, was happy.  He believed the ISIS claims that they were on the right path and that ISIS will create“a Sunni state, and that people will get their rights and salaries and live a happy life.”

It turned out quite the opposite however, according to Abu Taha who says he joined both for jihad and in order to eat. When ISIS came into the area, they took over the jobs and economy and there was, according to Abu Taha, nothing to eat. He was married and had a newborn baby. Desperate, he was grateful for the food that ISIS provided and the small salary they paid him. His family however, did not want Abu Taha to join and over his three months working as a guard for ISIS, he quickly became disillusioned.

Once in however, it was not easy to exit. When Abu Taha quit he lost his food allotment and was also called in front of a shariah judge who had him flogged 70 times and imprisoned for 7 days. Jobless under ISIS rule, Abu Taha states that he and his family were starving and that he also witnessed many injustices.

One ISIS injustice that particularly disturbed Abu Taha, as it did many other ISIS defectors ICSVE have interviewed, was ISIS’s practice of claiming to grant amnesty to fighters of other groups but after they surrendered, later re-arresting and executing them.  Abu Taha also laments the destruction of property, the families that were killed by ISIS and that Mosul was reduced to rubble during the battles to liberate it from ISIS control.

Despite the promises by ISIS leaders to create a Sunni state, Abu Taha declares that it is Sunni people who have suffered the most at the hands of ISIS with great numbers of them displaced from their homes.

Abu Taha advises “anyone who wants to join this terrorist organization not to do so, because it’s a wrong path and you will destroy your chances of having a future.”

“I have destroyed my future with my own hands,” Abu Taha states, explaining that he is trying to deal with his guilt over serving ISIS and the pain of being imprisoned now, waiting to learn his sentence. Separated from his wife and child, Abu Taha learned his wife had given birth, in his absence, to their second child, a son.  He longs for them and also for his mother.

“I have made a mistake and I have to own up to my mistake,” he says, honestly facing it. “There is no ISIS anymore,” Abu Taha admits, acknowledging the general defeat of the group in Iraq.

If you are looking for them on the Internet, he warns, “get away from this and leave it. Think about your future and live happily. I advise them to get away from this, and for those who have stayed [in ISIS], to quit working with them.”

“[If you join ISIS you will end up] either killed or homeless,” Abu Taha states.

Do you believe the Abu Taha is telling the truth about his experiences inside ISIS?

What do you think of Abu Taha’s motivations for joining ISIS?

Do you think it was a good decision for him to join?

Why do you think ISIS doesn’t allow defectors?

Do you agree with him that there is no ISIS anymore?

Do you think ISIS can make a resurgence?  Or someday make a true Islamic State?

If so do you believe it would be a righteous state, or as Abu Taha recalls, a state filled with injustices and suffering?

ISIS, and other groups like them, use certain scriptures to justify their actions. They take these scriptures out of contextor misinterpret their meanings to manipulate less knowledgeable believers into joining and helping the group to achieve their goals.

Some of the verses used by groups like ISIS include these two which give permission to believers to fight disbelievers, and reminds believers to come to each other’s aid.

These verses are examples used by ISIS to justify their killings and atrocities under the pretext of committing jihad. ISIS interpret these verses, and other verses like them, to burden Sunni youth and to make them believe it is their duty to aid the Islamic State, otherwise their destiny would be hell. ISIS leaders also use the unjust treatment done to the Sunni people to trigger emotional responses, particularly outrage and the desire for revenge to entice others to join them.  Those who do not have a strong understanding of the Quran take ISIS speeches and propaganda as truth. Likewise, when they are able to do so, ISIS spends money on the recruits to attract the attention of the poor to join them.

If we read these verses in their context we will find that the first verse is talking about a certain incident, which is related to the Prophet (PBUH) when he immigrated to Medina and established a new Islamic state. When he was in Mecca, Allah told the Prophet (PBUH) in many verses not to fight back and to be patient until permission is given to resist with fighting. Finally it was given, but this verse granting permission for fighthing applies to a particular place and time, not to all times and places and there were conditions to justify this permission. The most important of these conditions is that the state of Medina was established by the consent of all the people who were residing there, and these people knew exactly what their rights and duties were. Furthermore, the population of Medina were Muslims and Jews and they both had the same rights and duties as we can see in the constitution of Medina, so how can we compare that legitimate state with an illegitimately declared “Caliphate” such as ISIS declared?.

The next verse is also completely taken out of context, let us read the whole verse:

“Those who believed, and adopted exile, and fought for the Faith, with their property and their persons, in the cause of Allah, as well as those who gave (them) asylum and aid,- these are (all) friends and protectors, one of another. As to those who believed but came not into exile, ye owe no duty of protection to them until they come into exile; but if they seek your aid in religion, it is your duty to help them, except against a people with whom ye have a treaty of mutual alliance. And (remember) Allah seeth all that ye do.”

This verse is a principle of diplomatic relations, which any legitimate Islamic state should have with other non-Muslim nations such that when a minority of Muslims is under attack inside another state, then we have to aid them to remove the harm except if we have a treaty with the other state, This is generally true in all diplomatic relations.

However, ISIS takes only the part which says “if they seek your aid in religion, it is your duty to help them” and ignores the rest, and then obliges poor people and laymen (ignorant in Islamic teachings) to join them.

One of the most important ways to stand against ISIS ideology is to study the whole scriptures they use and compare them with the similar verses in the Quran or the traditions of the Prophet (PBUH) and one will definitely discover how they are manipulated.

Timed transcript of It is Jihadvideo:

1:06     When I stopped working with them they stopped giving me food.

1:26     [but after] they gave them amnesty, they started capturing them again.

1:53  and that people will get their rights and salaries and live a happy life.

2:01  Sunni people were displaced, and took all the harm.

2:07   When they first came, they promised us things. All of it wasfalse.

2:13     I advise anyone who wants to join this terrorist organization

2:17     because it’s a wrong path and you will destroy your chances of having a future.

2:52  [If you are looking for them on the Internet] get away from this and leave it.

3:10   The Truth Behind the Islamic State

3:13   Sponsored by the International Center for the Study of