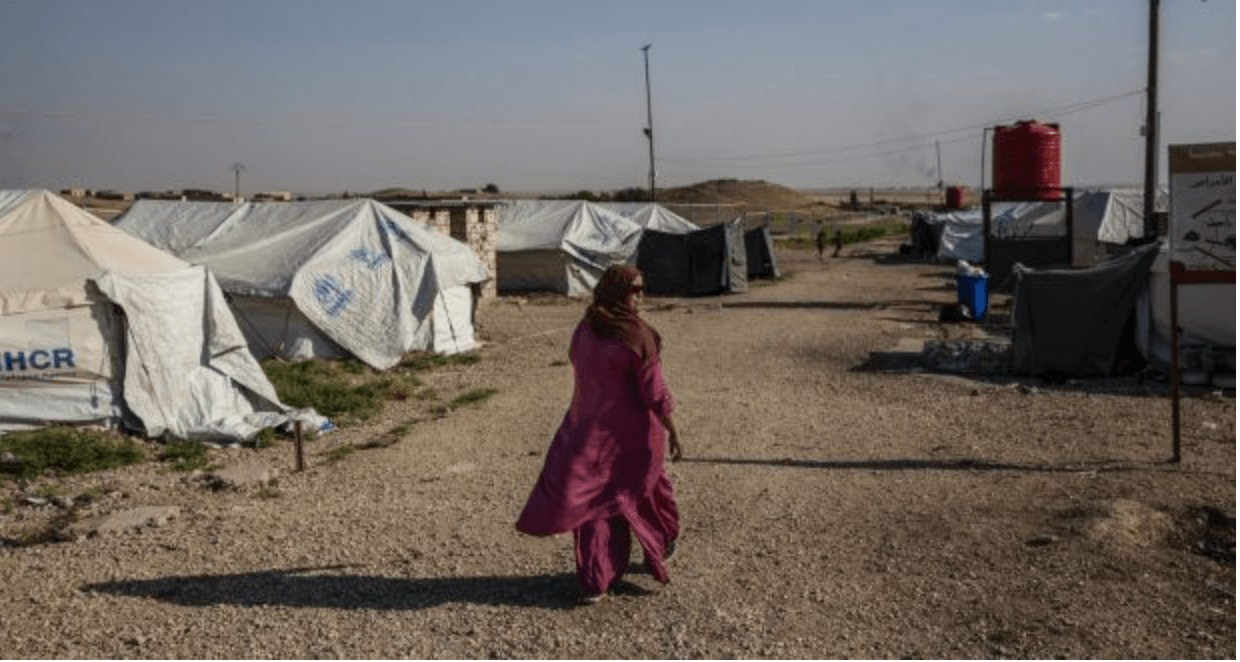 As Published in The Washington Examiner

The Syrian civil uprising, abuses by Syrian President Bashar Assad, and calls from terrorist groups such as the Islamic State and Jabhat al-Nusra, an offshoot of al Qaeda, resulted in an estimated 40,000 or more foreign fighters from more than 100 countries migrating to the battle zone.  Accompanying them were wives and children of foreign fighters and single women destined to marry and bear children there. As ISIS cadres are being rounded up and killed, the captured women and children have been herded into camps, where their fates remain uncertain.  One of these is Roj Camp, located in the Rojava region of northern Syria, where researchers from our organization, the International Center for the Study of Violent Extremism, recently interviewed 11 female detainees. This is in addition to 10 male foreign fighters recently interviewed by ICSVE researchers in a prison facility in Rojava. None of the females have been charged. Yet as these women languish in prisons and camps dotted throughout Syria and Iraq, the questions hang over them: Victim or criminal? Can they return home? And what will be the fate of their children?

Sinam Mohamad, representative of the Syrian Democratic Council in the U.S., has said, “We are trying to send them home, but their countries don’t want to take them back.” Indeed, more countries than ever are stripping citizenship from those who joined terrorist groups. The United Kingdom recently stripped two former ISIS fighters of their citizenship. And European citizens with dual passports told their interviewers that they do not want to return to countries they were not born in. They have no affinity with those countries, and they fear torture in their prisons.

For those bearing only one passport, citizenship revocation effectively renders them stateless and raises questions of who is responsible to prosecute, imprison, and attempt to rehabilitate them before release. Western countries that strip citizenship base their reasoning on national security, amid fears that the collapse of ISIS would bring an influx of militants from Iraq and Syria. Citizenship revocation is often justified on the grounds that these individuals voluntarily joined a terrorist group, that these individuals voluntarily declared allegiance to a terrorist group and/or a foreign country, that these individuals lived outside the country of origin for a considerable amount of time without declaring an intention to remain a citizen, and that they were not pressured to leave their home country to join a terrorist group and/or a foreign country.

Indeed, many who joined ISIS burned or otherwise destroyed their passports, some posting videos renouncing their “kafir” (unbelieving) countries. Yet, others did not. Twenty-three-year-old Cassandra Bodret from a small town near Liege, Belgium, stated, “It was a big mistake to go [to Syria]. My husband took my passport and cut it up. I cried and broke everything in the house.”

Currently, there are 500 women and 1,200 children at Roj Camp. While some have been repatriated to their countries of origin, most await a resolution to their cases.

We conducted our interviews in a dry, dusty camp dotted with shabby U.N. tents, many with holes in them, sitting unshaded under the sweltering sun. Tents where women cooked with propane burners were situated in a field of small, dusty stones. The Arabic toilet we were given to use, like theirs, was a grim hole in the floor. The kids played with rocks or languished in the few shady areas. There was a dirty, littered canal in which some older children played. Their mothers told us, and the staff confirmed, that the limited food allotments are poor-quality dried peas, rice, and other substandard fare. “They no longer give us fresh vegetables,” one mother laments. The babies often do not have diapers. Their mothers complained there are no vaccinations available. Both mothers and children have already died in these camps.

Of the more than 100 ISIS cadres we have interviewed so far, we know that some women played violent roles in the group, most notably serving in the ISIS religious police, Hisbah. Such roles included flogging, biting with metal teeth, and otherwise torturing others. Some ISIS women were also trained as suicide bombers, to fight and use explosive materials and devices.  Yet the European-national women we talked to appear not to be among this group. Instead, they whispered to us about their fear of enforcers among them in the camp. Cassandra, dressed in a full hijab (head and neck covering), despite recently appearing with her blond hair exposed in a televised RT piece, explained that she was punished for doing so, adding, “[Some] people are very extremist here. They started stealing my private things in the tent. [They] oblige me to wear it.”

Prison anywhere is hard. This camp appears inhumane when one considers children are being held here.

H.S. from Vilvoorde, Belgium, now 22 years old, claimed to have very little knowledge of the ISIS. But wanting to be with her father, she followed him in, only to immediately realize her mistake. She explained how ISIS shot her father in front of her as they tried to escape — one of their many attempts. She told us, “It’s hard to be in prison. But to be in a prison with your kids is worse because you see your child suffer.” Her 19-month-old son “sits and throws stones. He needs to go to school. He needs stimulation,” she said. There is a not a tree or toy in sight, much less the hope of a playground.

Disturbing issues of collective punishment and cruel and inhumane punishment arose during our days visiting the camp. Twenty-five-year-old Maria (not her real name), who left her town near Vilvoorde, Belgium, claimed she went to Syria to help suffering children. Now it is her 18-month-old-child who suffers. “There is not enough oxygen in his blood. He is not good. He stops breathing. His color changes, [he gets] green lips.” H.S., the Belgian ISIS wife mentioned above, is seven months pregnant and risks another cesarean-section birth.

Article 16 of the U.N. Convention against Torture requires parties to prevent “acts of cruel, inhuman or degrading treatment or punishment.” Is it not a slow torture to watch your child die in front of your eyes, to be denied vaccinations for your baby, to not have medical treatments, or to give birth and return after a C-section to a camp with a newborn who may not have a chance to survive in the heat and dust?  These are serious concerns about both women and children held in detention centers in Syria.

The toddler and infant children of ISIS did not commit crimes. Some of their mothers are not keen to have their children leave without them. Others welcome any way to bring their children to safety. All of the European women we talked to said they had completely renounced ISIS and asked us to intercede with their countries — even if to be put in rehabilitation or serve prison sentences at home for the crime they may have committed in joining the ISIS. They all expressed the naivete of having believed ISIS’s lies.

Western countries must consider the need to repatriate at least the children in these camps, if not also their mothers.

Anne Speckhard, Ph.D., is Director of the International Center for the Study of Violent Extremism (ICSVE) and serves as an Adjunct Associate Professor of Psychiatry at Georgetown University School of Medicine. She has interviewed over 600 terrorists, their family members and supporters in various parts of the world including in Western Europe, the Balkans, Central Asia, the Former Soviet Union and the Middle East. In the past two years, she and ICSVE staff have been collecting interviews (n=101) with ISIS defectors, returnees and prisoners, studying their trajectories into and out of terrorism, their experiences inside ISIS, as well as developing the Breaking the ISIS Brand Counter Narrative Project materials from these interviews. She has also been training key stakeholders in law enforcement, intelligence, educators, and other countering violent extremism professionals on the use of counter-narrative messaging materials produced by ICSVE both locally and internationally as well as studying the use of children as violent actors by groups such as ISIS and consulting on how to rehabilitate them. In 2007, she was responsible for designing the psychological and Islamic challenge aspects of the Detainee Rehabilitation Program in Iraq to be applied to 20,000 + detainees and 800 juveniles. She is a sought after counterterrorism experts and has consulted to NATO, OSCE, foreign governments and to the U.S. Senate & House, Departments of State, Defense, Justice, Homeland Security, Health & Human Services, CIA and FBI and CNN, BBC, NPR, Fox News, MSNBC, CTV, and in Time, The New York Times, The Washington Post, London Times and many other publications. She regularly speaks and publishes on the topics of the psychology of radicalization and terrorism and is the author of several books, including Talking to Terrorists, Bride of ISIS, Undercover Jihadi and ISIS Defectors: Inside Stories of the Terrorist Caliphate. Her publications are found here: https://georgetown.academia.edu/AnneSpeckhardWebsite: and on the ICSVE website https://www.icsve.org Follow @AnneSpeckhard

Ardian Shajkovci, Ph.D. – is the Director of Research and a Senior Research Fellow at the International Center for the Study of Violent Extremism (ICSVE). He has been collecting interviews with ISIS defectors and studying their trajectories into and out of terrorism as well as training key stakeholders in law enforcement, intelligence, educators, and other countering violent extremism professionals on the use of counter-narrative messaging materials produced by ICSVE both locally and internationally. He has also been studying the use of children as violent actors by groups such as ISIS and how to rehabilitate them. He has conducted fieldwork in Western Europe, the Balkans, Central Asia, Africa, and the Middle East, mostly recently in Jordan and Iraq. He has presented at professional conferences and published on the topic of radicalization and terrorism. He holds a doctorate in Public Policy and Administration, with a focus on Homeland Security Policy, from Walden University. He obtained his M.A. degree in Public Policy and Administration from Northwestern University and a B.A. degree in International Relations and Diplomacy from Dominican University. He is also an adjunct professor teaching counterterrorism and CVE courses at Nichols College.