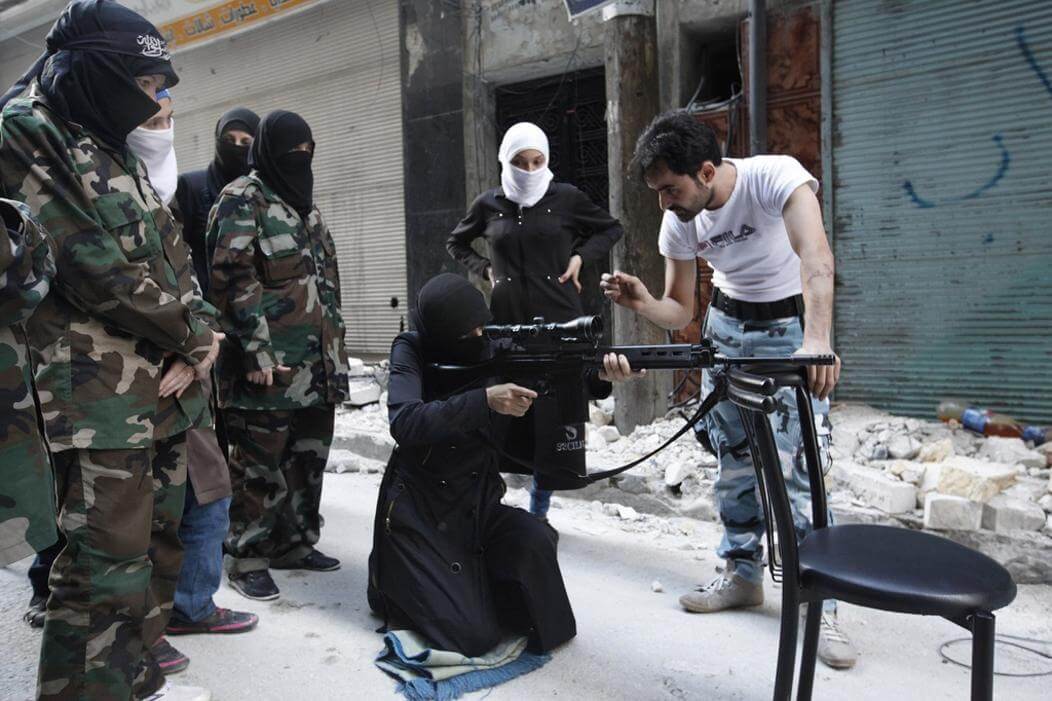 This week, in october 2015, it was reported that Arab women under ISIS control are being approached to form an all female suicide brigade. This report coming via the Daily Mail from the human rights activist group Syria is being Slaughtered Silently. [i]

Up to now ISIS has relied on young teenage boys they indoctrinate for so-called “martyrdom” missions and foreign fighters to carry out their suicide attacks, but have refrained from using women. In recent interviews with former ISIS cadres, we learned that the group requires desperate youth under their control who want to join their ranks—to survive and bring food to their families—to first take Shariah training courses. These youth join out of fascination with strong but brutal male role models at a time when their fathers can’t protect them and as a result of joining, their families are immediately fed and the youth earn an impressive salary for the times and territory.

These rewards are short-lived for some however, as the group’s Shariah trainers observe them carefully and chose the most vulnerable and ardent among them, completely isolating them from the others, as they prepare them for suicide missions convincing them that their reward will be Paradise. Likewise foreigner fighters who arrive hell bent on taking a suicide mission to—as they believe—cleanse them from all their sins and ready them for paradise through “martyrdom,” are also readily used by the group for suicide missions. And these missions are highly effective as the al Nusrah cadres and other former militia members reported to us—that they often flee ISIS invaded territory out of fear, particularly terror caused by youth who appear at checkpoints to unexpectedly explode themselves.

Indeed, suicide bombers are known for being inexpensive, highly lethal, and precise in they are directed by humans bearing explosives who can observe the field of attack and alter plans in the last minutes of a mission to increase the fatalities. Whether it is true or not that ISIS while under heavy siege from Western bombing attacks would now consider rising up a group of female bombers makes sense. Militant jihadi groups including Palestinian terrorists and al Qaeda in Iraq previously have resorted to sending females when males had a hard time passing checkpoints.[ii] They quickly learned that local populations did not protest—despite their fears that they would—and in fact great swathes of the world praised Wafa Idris the first Palestinian suicide bomber.  Her sending group had been afraid at first to claim her but quickly did when they saw the resulting poems, praise and acclaim that her action won for their cause.[iii]

Using females as suicide bombers have certain advantages for groups—usually they are not in leadership positions so they are more or less expendable. The violence of women tends to fascinate us so they garner much more press for their attacks than those carried out by males and the idea of a female exploding herself strikes terror in the hearts of the enemy. [iv]

At present Turkish police are under alert looking for four ISIS operatives that have been reportedly sent to carry out attacks inside Turkey.  Whether or not they’ll be “martyrdom” operations is still unclear, but among them is one woman—Walentina Slobodjanjuk from Kazakhstan, born in 1995.  In her picture, she appears as a beautiful young woman that no one would suspect of her purported orders to carry out a lethal mission—to stage a major terror attack—such as hijack a plane or a ship, or attack a crowd during a rally.

It will not be a surprise if ISIS resorts to using female suicide bombers if it becomes desperate.  However there are also reasons they won’t use females. The recent report points out that the European “brides” of ISIS are not being recruited—only Arab women have reportedly been approached thus far.

This matches with our date from recent interviews with former ISIS cadres. The European women are needed for their daily Internet recruiting and propaganda efforts. We are told their duties are to spend their entire days in Raqqa on the Internet recruiting other women.

ISIS fighters are also desperate for wives and the group is trying to establish a state and propagate itself through childbearing, so sending even the Arab women may also be too costly an action to the group at present. We remain watching to see what will develop, but if other groups provide a pattern, militant jihadi groups when under strong siege often turn to the women to strike in so-called “martyrdom” missions and ISIS will likely be no different.

[i] Wyke, T. (October 27, 2015). Desperate ISIS forms new female suicide squad to carry out bombings because the terror group is running out of children for use in the attacks. Daily Mail. http://www.dailymail.co.uk/news/article-3290323/Desperate-ISIS-forms-new-female-suicide-squad-carry-bombings-terror-group-running-children-use-attacks.html#ixzz3pkz7vtke

[iv] Speckhard, A. (2008). The Emergence of Female Suicide Terrorists. Studies in Conflict and Terrorism, 31, 1-29. Speckhard, A. (May 4, 2015).; Female terrorists in ISIS, al Qaeda and 21rst century terrorism. Trends Research. https://www.academia.edu/12606010/Female_Terrorists_in_ISIS_al_Qaeda_and_21st_Century_Terrorism; Speckhard, A., & Akhmedova, K. (2008). Black Widows and Beyond: Understanding the Motivations and Life Trajectories of Chechen Female Terrorists. In C. Ness (Ed.), Female Terrorism and Militancy: Agency, Utility and Organization: Agency, Utility and Organization: Routledge.; and Speckhard, A. (2009). Female suicide bombers in Iraq. Democracy and Security, 5(1), 19-50.