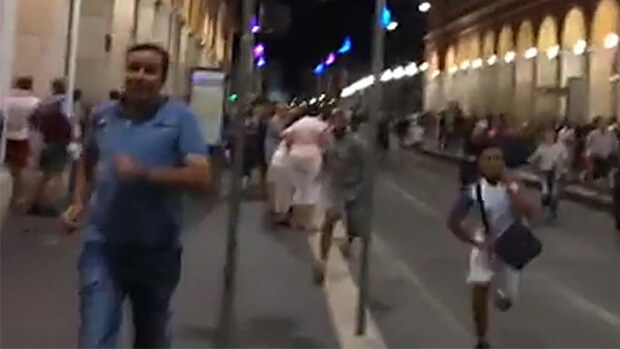 Celebrations and calls for more attacks to “enrage the kufrs [unbelievers]” erupted on ISIS Telegram chat rooms (encrypted social media) just after this evening’s July 14 terrorist attack in Nice, France in which a truck driver plowed into crowds celebrating Bastille Day. At least eighty people are reported dead. If this turns out to be an ISIS attack, it will not be the first time ISIS has called for the use of vehicles in attacks.

The International Center for the Study of Violent Terrorism, ICSVE, has obtained a sophisticated and disturbing ISIS video, produced by ISIS’ al-Hayat Media Center and pushed out during Ramadan that suggests various ways an ISIS follower can attack, including a truck bomb shown with explosives and the making of the bomb.

Alongside images of injured American soldiers returning from war, and graphic videos of Western victims being beheaded, ISIS warns that they can no longer wait for Western soldiers to attack them, they are now coming to attack us in our homelands, saying “the terror is now” and “the end is coming”. “Fill your cars with gas…” the video instructs as it shows an ISIS soldier readying to run civilians down. Realistic depictions of attacks are illustrated on the film: a suicide vest attack in New York City, a sniper attack in London, activating a German sleeper cell, and a driver of an SUV preparing to run over crowds in Australia. The film references using an explosive-laden truck to attack.

They also state, “(Coalition) bombs falling upon us increases our faith”. The version of the video we have obtained is subtitled in English and accompanied with hypnotic chanting in German.

Calls to attack the West were made prior to Ramadan by ISIS spokesman, Abu Mohammed al Adnani, and also included using a vehicle to run over innocent civilians. In September 2014 Adnani was reported by the Independent as urging ISIS supporters: “If you can kill a disbelieving American or European – especially the spiteful and filthy French – or an Australian, or a Canadian, or any other disbeliever from the disbelievers waging war, including the citizens of the countries that entered into a coalition against the Islamic State, then rely upon Allah, and kill him in any manner or way, however it may be…Smash his head with a rock, or slaughter him with a knife, or run him over with your car, or throw him down from a high place, or choke him, or poison him.”

ISIS inspired cadres have already used vehicles to attack—in France in Nantes and Dijon, and in Toronto, Canada. Likewise as we know from our defector interviews, ISIS commonly carries out explosive laden car and truck “martyrdom” attacks in Syria and Iraq.

Since embarking on the ISIS Defectors Interview Project, ICSVE has interviewed 38 ISIS defectors from Western Europe, the Balkans and Syria. Defectors tell us that ISIS has co-opted the highly skilled video and graphics capability Syrians were well known for prior to the Syrian uprising. Within hours of this evening’s Nice attack, ISIS has produced multiple graphic Internet memes with fiery images of the Eiffel tower burning and ISIS flags flying in New York city with captions in which they warn Christians that, “Lone wolves will hunt you in America’s streets.”

Likewise they warn the French, “Paris, the fighting has just begun.”

ISIS cadres dominating the London skyline are shown in one poster with the caption “We are here”, suggesting that sleeper cells are already in place in London, ready to rise up and attack.

Another shows Rome with an ISIS flag flying depicting their expected victory over the West (often referred to as “Rome). 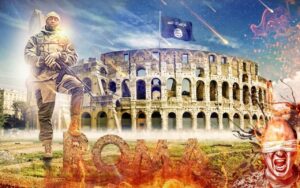 While many have believed that bombing ISIS to erode its territory and ability to finance itself with oil sales would lead to its demise, ISIS is looking more like a cornered cat that attacks even more brazenly. ISIS is now doing exactly what our defectors told us its soldiers would do—shave their beards and blend into civil society to mount urban guerilla-style attacks—as we now see in the West.

ISIS is working hard to enrage the West against its Muslim population to cause a backlash against Muslims, which will make it even harder for law enforcement to win trust and engage these communities to learn about terrorists before they attack. It is almost impossible to stop lone wolves if there is not credible intelligence, and this requires having trust between law enforcement and communities.

Despite what some may urge in the light of these most recent attacks, fighting against terrorists with military means is only a part of an effective strategy; alone it is not enough as we are seeing.

We must break the ISIS brand that readily draws in and radicalizes recruits online. ISIS is winning in the social media space where they are convincing disengaged people in the West that violence is the solution to bringing about their version of justice through a utopian Islamic “Caliphate”. At ICSVE we are raising the compelling voices of real-life ISIS defectors, so disillusioned they risked their lives to escape. We are starting to feed their powerful messages about the hypocrisy and horror of ISIS’ false Islam onto the Internet, but looking at ISIS’ sophisticated video and photo-shop capacity, it becomes sadly apparent that unless significant funding is put toward efforts like ours, ISIS will win.

Anne Speckhard, Ph.D. is Adjunct Associate Professor of Psychiatry at Georgetown University in the School of Medicine and Director of the International Center for the Study of Violent Extremism (ICSVE). She is also the author of Talking to Terrorists, Bride of ISIS and coauthor of the just released book, ISIS Defectors: Inside Stories of the Terrorist Caliphate, Undercover Jihadi and Warrior Princess. Dr. Speckhard has interviewed nearly 500 terrorists, their family members and supporters in various parts of the world including Gaza, West Bank, Chechnya, Iraq, Jordan, Turkey and many countries in Europe. In 2007, she was responsible for designing the psychological and Islamic challenge aspects of the Detainee Rehabilitation Program in Iraq to be applied to 20,000 + detainees and 800 juveniles.

Ahmet S. Yayla, Ph.D. is the Deputy Director of the International Center for the Study of Violent Extremism (ICSVE). He is also Adj. Professor at the Department of Criminology, Law and Society at George Mason University and formerly served as Professor and the Chair of the Sociology Department at Harran University in Turkey. Dr. Yayla earned both his Master’s and Ph.D. degrees in Criminal Justice and Information Science from the University of North Texas in the United States. Dr. Yayla served as the Chief of Counterterrorism and Operations Division for the Turkish National Police. He is co-author with Dr. Speckhard of the just released book: ISIS Defectors: Inside Stories of the Terrorist Caliphate.

Both are sought after counter-terrorism experts and have consulted to NATO, OSCE, foreign governments and to the U.S. Senate & House, Departments of State, Defense, Justice, Homeland Security, Health & Human Services, CIA and FBI and CNN, BBC, NPR, Fox News, MSNBC, CTV, and in Time, The New York Times, The Washington Post, London Times and many other publications.

More information about the ISIS Defector interviews is available in their just-released book: ISIS Defectors: Inside Stories of the Terrorist Caliphate.

Reference for this article is Yayla A & Speckhard, A (July 14, 2016) Bastille Celebrations, ICSVE Brief Reports. https://www.icsve.org/brief-reports/inside-isis-chat-rooms/