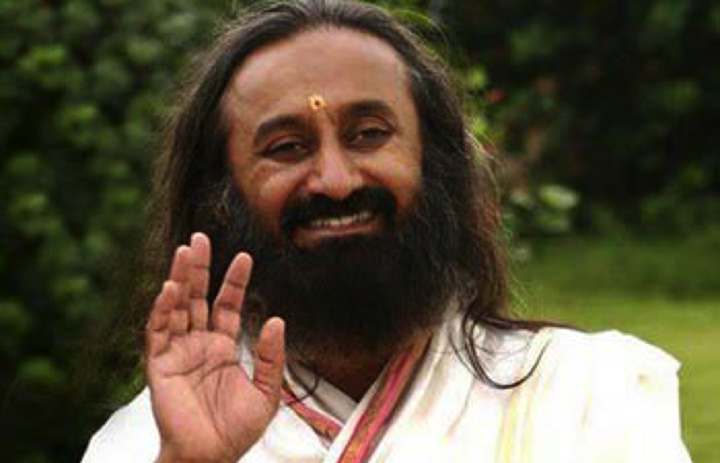 In Spring of 2007 I was seated on a flight into Baghdad International Airport, on my way into Camp Cropper, where I was interviewing detainees and writing what would become the basis of the Detainee Rehabilitation Program—a plan to try and disengage and deradicalize thousands of violent extremists hiding themselves among the 20,000 detainees and 800 juveniles then held by the U.S. forces in Iraq. Seated next to me on the Royal Jordanian flight was a longhaired and bearded Indian guru, smelling of Indian oils and dressed in gauzy flowing white robes.

As the plane made it’s signature corkscrew descent into Baghdad International Airport to evade getting shot at, we started to converse about our reasons for coming to Iraq at such a turbulent time. It turns out that the man seated next to me was a quite famous guru—Sri Sri Ravi Shankar, best known for founding the Art of Living foundation, which has a vast global community of millions of followers.[1] I had never heard of him and was surprised to hear him tell me, “I’m going to Baghdad to address the Parliament and I’ll be working with the detainees—to bring peace to Iraq and help them give up violence.” It was news to me, as I didn’t think the U.S. Department of Defense was bringing him in.

“How do you plan to do this?” I asked—as I had just spent the last four months studying all the existing disengagement/deradicalization programs existing at the time and I was familiar with the others working in this space. They were basically all Islamic challenge programs in which friendly imams created rapport with inmates and then began to challenge the extremists about the Islamic verses and hadiths they were following, trying to bring them back into a nonviolent understanding of Islam and to relinquish violent extremism. Some programs like the Saudis and Singaporeans also offered post-release support that ranged from offering support groups, wives, cars, housing and employment.

The one I was writing for the U.S. Department of Defense would be new in that it would take place in an active conflict zone where those released from prison might face again the very things that radicalized them in the first place. It was also different in that it would address the psychological “hooks” upon which the terrorist ideology hung—exploring and addressing the reasons detainees gravitated to the terrorist group and resonated to the violent ideology that claimed they should attack their own government and innocent civilians using IEDs in marketplaces, on the roads, etc. We would combine psychological methods with Islamic challenge and hopefully win some extremists back from their commitment to violence. Although, I had no illusions—I knew many would never turn away from their commitment to terrorism and killing. I had seen the display of hand-hewn weapons hung on the wall in the U.S. prisons—dozens of bits of metal that the detainees had managed to break from the fences and shape and sharpen into knife blades. I was under no illusion that I could be attacked with such a knife.

But seated next to “his holiness” I was curious to know what Sri Sri Ravi Shankar had to offer that he believed might be superior. “Breathing,” he told me. Breathing is the secret to ending all stress in the world and bringing world peace. Later when I was working in Camp Bucca where the bulk of our detainees were housed, I’d meet again the female Iraqi Parliamentarian who was responsible for addressing human right violations. She had been to Sri Sri Ravi Shankar’s parliamentary address and told me about the breathing exercises he had the entire parliament engage in, “It was wonderful! So peaceful!”

Indeed, I was later introduced to some of the Art of Living breathing techniques (through a friend who had learned them) and also in yoga classes learned similar breathing techniques. They do reset the body and mind in a calming fashion. But could these breathing methods alone turn an extremist away from engaging in terrorism? Perhaps, if he was willing to calm his body he could also calm his thoughts and consider some better alternatives?

I was mildly amused until I saw Art of Living pop up again in Brussels, Belgium in 2016, just before the latest attacks. There, an avid follower of Sri Sri Ravi Shankar told me that she was working with the mothers of those who go to Syria to teach them these breathing techniques and trying to work with the returnees as well. She presented herself as a professional and I thought at first she was a social worker or psychologist—until she spoke more about her program. It may be harmless enough, but alarm bells rang for me when she explained that she had begun following the guru after her father’s death and had given up her professional job to do what thousands of others are doing for Sri Sri Ravi Shankar—volunteering to recruit others to pay high prices for expensive classes the proceeds of which go into the guru’s coffers—leading some to label his movement a cult. Indeed the written counter-extremism materials she offered me—along with inviting both my colleague and I to take his pricey classes—were expensively produced. There was clearly a lot of money behind their effort.

Cult leader or not, I leave it to others with that expertise to decide. But I will point out that cult expert, Steve Hassan’s Freedom of Mind website mentions that “Former devotes have been told that if they leave the master or organization ‘their mind will be eaten by itself’” which does seem like a negative indication.[2]

In any case, it’s clear ISIS does not respond well to the Indian guru. When he recently sent them an offer for peace talks, ISIS responded by returning his offer with the picture of a beheaded man. Sri Sri Ravi Shankar, the world peace guru, then told press in India that ISIS “does not want any peace talks. Hence, they should be dealt with militarily.”[3]

Reference for this article is: Speckhard, Anne (April 24, 2016) Indian Guru Offers ISIS an Olive Branch and Receives a Photograph of a Beheaded Man in Return ICSVE Brief Report