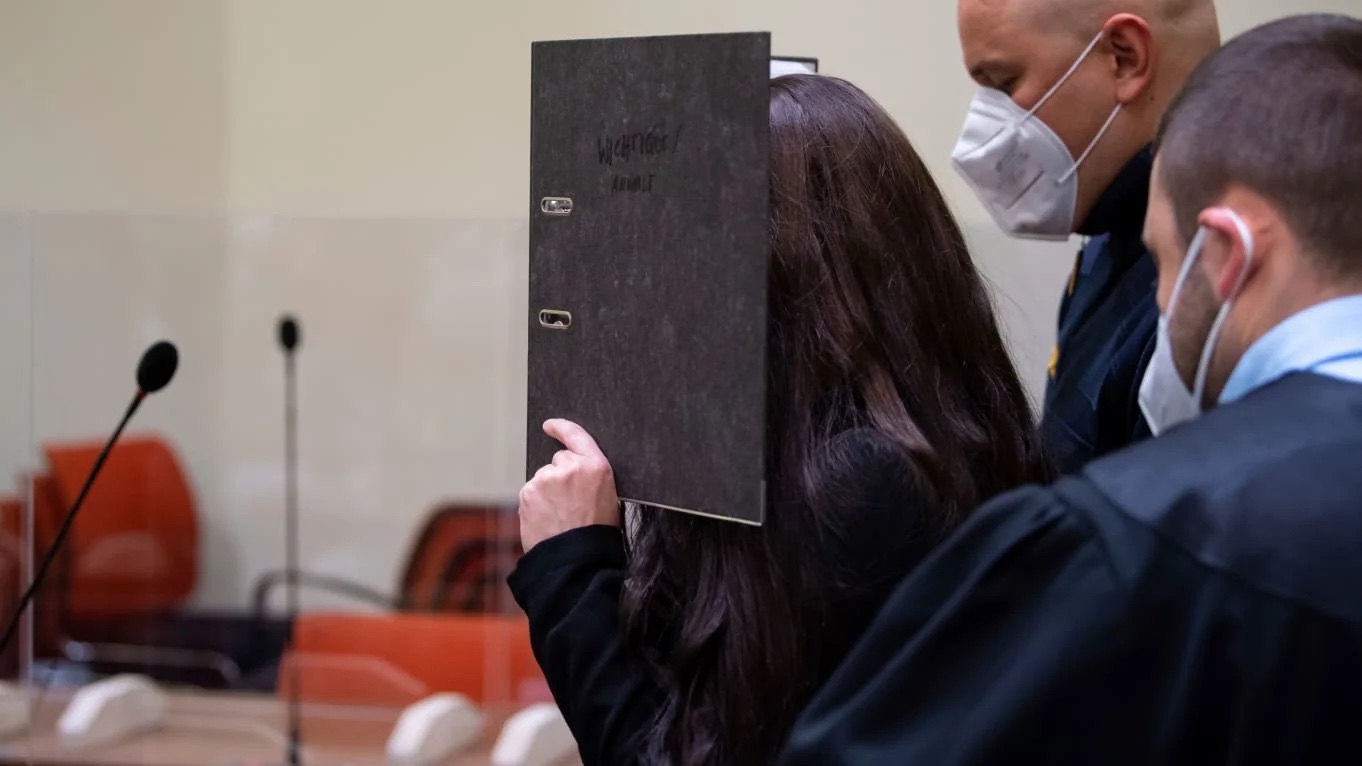 As published in The Daily Beast

“You will be caught and prosecuted if you have committed crimes inside the Islamic State.”

That was the strong message conveyed on Monday in the successful prosecution of Jennifer Wenisch, a German female ISIS returnee who had, upon her return to Germany from Syria in 2016, claimed innocence. The truth, however, was far more sinister.

27-year-old Wenisch was a convert to Islam who traveled from northwest Germany to Syria to join ISIS in 2014. Once with ISIS, she married Taha al-Jumailly and lived with him in Mosul, where they bought an enslaved Yazidi woman and her 5-year-old daughter. The couple was subsequently implicated in the murder of the child.

According to the prosecutor’s statements: “After the girl fell ill and wet her mattress, the husband of the accused chained her up outside as punishment and let the child die of thirst in the scorching heat… The accused allowed her husband to do so and did nothing to save the girl.”

Wenisch might never have been caught for this crime, had it not been for the cooperation between the FBI and the German police. According to police sources—with whom the International Center for the Study of Violent Extremism (ICSVE) shared over 20 ISIS detainees research interviews, with the detainees full permission—Wenisch wished to get back to ISIS after her return to Germany. And she may have, had the police not caught on to her.

Thinking she was chatting over the internet to a fellow ISIS supporter in 2018, German police said that Wenisch began admitting that she was a member of the ISIS hisbah (ISIS’s brutal morality police) and that she had owned an enslaved Yazidi woman. She agreed to meet the FBI informant she was chatting with and let him drive her across the country to depart Germany under the radar. Unknown to Wenisch was that the FBI and German police cooperating on the case had installed a microphone in the dashboard of the car and that all her admissions of crime were being recorded as they drove across the country together. Playing his part, the FBI informant told her he wished he could accompany her to Syria.

Wenisch admitted to the informant about the slave girl’s murder and about how she had been recruited in mid-2015 to ISIS’s morality police. She, like other Western women who served in the ISIS hisbah, had been armed with an AK-47 assault rifle, a pistol and an explosives vest, as she patrolled city parks in ISIS-occupied Fallujah and Mosul to enforce ISIS’s dress code and bans on alcohol and tobacco.

Instead of making it past Germany’s borders, Wenisch was arrested, and German federal prosecutor Claudia Gorf began assembling her case with the recording in hand. In the same time period, Gorf was approached by Yazidi activists working with Amal Clooney who were trying to get the child’s murder prosecuted on behalf of the surviving Yazidi mother. Federal prosecutor Gorf managed to bring the Yazidi mother, known only as “Nora,” to Germany to testify in the case as the main witness to the child being chained up to die.

Defense attorneys argued that there is no proof that the child actually died as no body or records have been produced. ICSVE researchers, having learned of the case, searched independently with the help of the Iraqi Falcons Intelligence cell for additional evidence of the child’s death as she was taken to Fallujah Hospital, where she either arrived dead or succumbed from unconsciousness to death. While some of the staff remembered the case, the medical records at the hospital had been burned during the ISIS conflicts and could not be retrieved. Nora’s testimony of her child’s cruel death, however, met the threshold of courtroom evidence. Wenisch’s Iraqi husband, Taha al-Jumailly, is also facing a separate trial in Frankfurt with a verdict due in late November.

As with many ISIS returnees, Wenisch wanted to portray herself as innocent upon her return to Germany to evade the justice system. Months after the child’s death in 2015, Wenisch had made her way out of Syria and traveled to Ankara to apply for new identity papers at the German embassy. There, she was arrested by Turkish security services upon leaving the building, and extradited to her home country. In Germany, Wenisch claimed to be a victim of ISIS propaganda who wanted nothing but to live peacefully at home.

As time would tell, she was not innocent at all, and is now a convicted accomplice to murder. According to the charges made against Wenisch, her “declared goal” after spending some years home in Germany was to travel back to ISIS-controlled territory, prosecutors said. In Monday’s verdict in a Munich court, she was found guilty of “two crimes against humanity in the form of enslavement,” as well as aiding and abetting the girl’s killing by failing to offer help. She was sentenced to ten years imprisonment.

The case marks a great victory for Yazidis, who were, according to most reckonings, the victims of genocide by ISIS and who have been disappointed by Iraqi courts’ failures to recognize specific crimes against Yazidis in their terrorist prosecutions of ISIS members. It is one of the first cases successfully tried that specifically addresses ISIS’s brutal treatment of the Yazidis. Applying the legal principle of universal jurisdiction, Germany has charged several German and foreign nationals with war crimes and crimes against humanity carried out abroad.

The UN is currently urging 57 nations to repatriate their nationals held in Syria by the Syrian Democratic Forces (SDF) and Autonomous Administration of Northeast Syria (AANES), who are exhausted from the burden of caring for more than 57,000 ISIS detainees, most of whom remain uncharged and unprosecuted. Belgium returned six nationals in July, and just this month, Germany and Denmark just returned 11 women and 37 children. There seems to be growing momentum for repatriations with recognition that the children are innocent and that prosecution—if not rehabilitation and reintegration—is possible.

Reference for this article: Speckhard, Anne (October 25, 2021). How the FBI Nabbed a German ISIS Woman Over 5-Year-Old Girl’s Vile Murder. The Daily Beast

Anne Speckhard, Ph.D., is Director of the International Center for the Study of Violent Extremism (ICSVE) and serves as an Adjunct Associate Professor of Psychiatry at Georgetown University School of Medicine. She has interviewed over 700 terrorists, their family members and supporters in various parts of the world including in Western Europe, the Balkans, Central Asia, the Former Soviet Union and the Middle East. In the past five years years, she has in-depth psychologically interviewed over 250 ISIS defectors, returnees and prisoners  as well as 16 al Shabaab cadres (and also interviewed their family members as well as ideologues) studying their trajectories into and out of terrorism, their experiences inside ISIS (and al Shabaab), as well as developing the Breaking the ISIS Brand Counter Narrative Project materials from these interviews which includes over 250 short counter narrative videos of terrorists denouncing their groups as un-Islamic, corrupt and brutal which have been used in over 150 Facebook and Instagram campaigns globally.  Since 2020 she has also launched the ICSVE Escape Hate Counter Narrative Project interviewing 25 white supremacists and members of hate groups developing counternarratives from their interviews as well. She has also been training key stakeholders in law enforcement, intelligence, educators, and other countering violent extremism professionals, both locally and internationally, on the psychology of terrorism, the use of counter-narrative messaging materials produced by ICSVE as well as studying the use of children as violent actors by groups such as ISIS.  Dr. Speckhard has given consultations and police trainings to U.S., German, UK, Dutch, Austrian, Swiss, Belgian, Danish, Iraqi, Jordanian and Thai national police and security officials, among others, as well as trainings to elite hostage negotiation teams. She also consults to foreign governments on issues of terrorist prevention and interventions and repatriation and rehabilitation of ISIS foreign fighters, wives and children. In 2007, she was responsible for designing the psychological and Islamic challenge aspects of the Detainee Rehabilitation Program in Iraq to be applied to 20,000 + detainees and 800 juveniles. She is a sought after counterterrorism expert and has consulted to NATO, OSCE, the EU Commission and EU Parliament, European and other foreign governments and to the U.S. Senate & House, Departments of State, Defense, Justice, Homeland Security, Health & Human Services, CIA, and FBI and appeared on CNN, BBC, NPR, Fox News, MSNBC, CTV, CBC and in Time, The New York Times, The Washington Post, London Times and many other publications. She regularly writes a column for Homeland Security Today and speaks and publishes on the topics of the psychology of radicalization and terrorism and is the author of several books, including Talking to Terrorists, Bride of ISIS, Undercover Jihadi and ISIS Defectors: Inside Stories of the Terrorist Caliphate. Her research has also been published in Global Security: Health, Science and Policy, Behavioral Sciences of Terrorism and Political Aggression, Journal of African Security, Journal of Strategic Security, the Journal of Human Security, Bidhaan: An International Journal of Somali Studies, Journal for Deradicalization, Perspectives on Terrorism and the International Studies Journal to name a few.  Her academic publications are found here: https://georgetown.academia.edu/AnneSpeckhardWebsite: and on the ICSVE website http://www.icsve.org  Follow @AnneSpeckhard