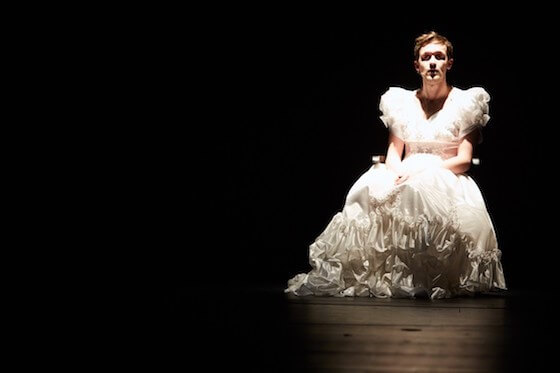 Paderborn, Germany—artistic director, Katharina Kreuzhage, adapts the book ISIS Defectors: Inside Stories of the Terrorist Caliphate by Anne Speckhard, Ph.D. and Ahmet S. Yayla, Ph.D. into a the theatrical production Forced the Material.  The book results from research interviews with ISIS defectors, most captured on video to be edited into short clips to fight ISIS recruiting on social media. Initial reviews are positive (German below, translated with the help of Google Translate.)

“The curtain rises and alone in the dark stage sits a man in wedding dress (Denis Wiencke). … director Catherine Kreuzhage lands a first coup in this beginning, a slap against the totalitarian Islamist Gender doctrine,” writes theater critic, Karin Yesilada. “It is a staged look into the heart of darkness, into the interior of the terrorist network.”

“The basis for this is the study by two scientists at the International Center for the Study of Violent Extremism , Anne Speckhard and Ahmet S. Yayla who conducted interviews with IS deserters. Kreuzhage had wisely procured the performing rights to “ISIS Defectors: Inside Stories of the Terrorist Caliphate” and first translated the book into German. In a long working process with the ensemble four portraits have been filtered for staging and politically contextualized. The staging waived the usual media offerings: There are no videos of bombings shown (an ironic replica of the Islamic ban on images), but relies instead exclusively on the spoken text.”

“Woven into the story are episodes of other fighters, such as the child soldier Ibni Omar” (see ISIS Defectors: chapter 3)… “The childlike naiveté transfigured the incredible cruelty of terrorists to a great, great adventure, which finally put an end to worried parents when they evacuate the boy to Turkey. And it does not stop at the Arab fighters; later countless biographies of German Islamists are presented that follow each year the terrorist network, more than 800 German per year, including Muslim immigrant children as well as German converts. ..The wildly overboard material of biographies of Germans recruited through Islamic State social networks who become assassins… in the forced timeframe it generates feelings of panic, explodes and releases stress from comforting.”

“The theater production…revealed great effects, such as when the flow of an attack – in excruciating minute by minute reports from the perspective of surveillance cameras – in this case the bombing of the Istanbul airport.”

The exciting moment arrives when actress, Claudia Sutter, dresses in a black niqab, in front of everyone, layer by layer. The image is of fear “burqa” as a theatrical ritual: laborious application of black socks, shoes, the black overshot, tying the face cloth, headscarf, and finally buttoning – and transformed from the bride is the Black Madonna. The act is reminiscent of the striptease of Neco. Çelik Black virgins, which extract from the full-face veil. The theatrical voyeurism is interspersed with horror with frightening facts and figures about the enslavement and sexual exploitation of captured women and girls by the Islamic State.”

“Concern is expressed by actor Stephan Weigelin who for a moment leaves his role, reflecting. Playing as a man in the wedding dress—that was his small piece of truth—to speak out that he opposes the totalitarian terror of ISIS.”

For more about the ISIS Defectors Interviews Project and ICSVE

Anne Speckhard, Ph.D. is Adjunct Associate Professor of Psychiatry at Georgetown University’s School of Medicine and Director of the International Center for the Study of Violent Extremism (ICSVE). She is also the author of Talking to Terrorists, Bride of ISIS, and co-author of the newly released ISIS Defectors: Inside Stories of the Terrorist Caliphate, Undercover Jihadi, and Warrior Princess. Dr. Speckhard has interviewed nearly 500 terrorists, their family members, and supporters in various parts of the world including Gaza, West Bank, Russia, Iraq, Jordan, Lebanon, Turkey and many countries in Europe. In 2007, she was responsible for designing the psychological and Islamic challenge aspects of the Detainee Rehabilitation Program in Iraq to be applied to 20,000 + detainees and 800 juveniles. For a complete list of publications for Anne Speckhard see: https://georgetown.academia.edu/AnneSpeckhard and www.icsve.org

Ahmet S. Yayla, Ph.D. is the Deputy Director of the International Center for the Study of Violent Extremism (ICSVE). He is also Adj. Professor at the Department of Criminology, Law and Society at George Mason University and formerly served as Professor and the Chair of the Sociology Department at Harran University in Turkey. Dr. Yayla earned both his Master’s and Ph.D. degrees in Criminal Justice and Information Science from the University of North Texas in the United States. Dr. Yayla served as the Chief of Counterterrorism and Operations Division for the Turkish National Police. See  https://gmu.academia.edu/AhmetSYayla https://www.icsve.org/staff-member/ahmet-s-yayla-2/