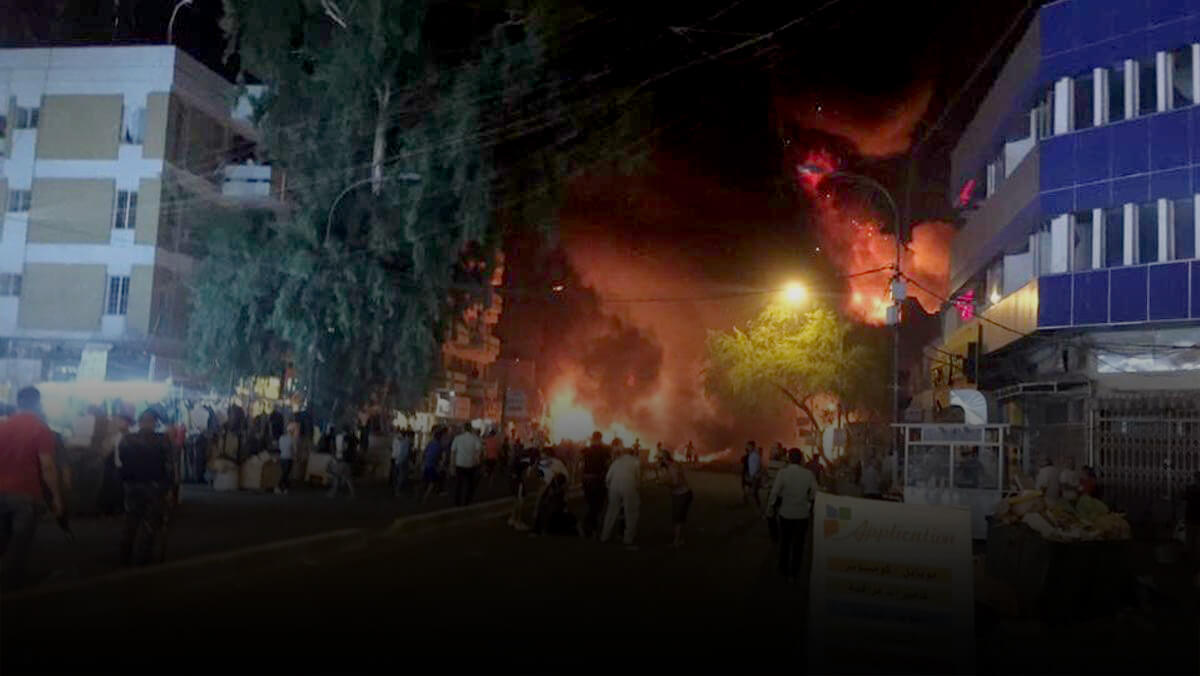 Dreams of Islamic State Bombings in Baghdadis the 75th counter narrative video in the ICSVE Breaking the ISIS Brandseries. This video features 35-year-old Abu Yahya, an Iraqi driver for ISIS. Abu Yahya was interviewed in December 2017 in a Baghdad prison by Anne Speckhard. The video was produced and edited by ICSVE staff.

Abu Yayha dropped out of school in the 4thgrade and went to work selling groceries and  gas canisters from a cart on the street. He also suffered hardships during his childhood living under Sadaam’s regime and the sanctions that were in place during most of his life. As an adult, he married and had three children, and continued seeking  out an existence as they lived in poverty.

“[I joined ISIS due to] the rough and hard circumstances [of our lives],” Abu Yahya explains in this video. Abu Yahya  learned about Islamic State’s incursion into Iraq via mass media and did not resonate to the idea that Sunni’s were in a state of war, or that they needed to join the Islamic State jihad. He simply needed a good paying job to support his family. Abu Yahya explains how he heard about a job through a friend who put him in touch with an ISIS recruiter, and claims that he joined ISIS purely for monetary gains.

Abu Yahya worked as a driver for ISIS, helping to place car bombs about the city.In this video, Abu Yayha recounts how in 2015he helped place three car bombs around Baghdad.  Two times he heard the explosions immediately after his partner remotely detonated them, and in one case,  he heard about it later, via mass media. Abu Yahya claims he initially felt sadness and grief about the victims of his criminal acts, but very quickly acclimated to becoming a killer.

However, when questioned further on the topic, Abu Yayha admits that he frequently suffers nightmares and posttraumatic recall.  He admits to episodes of sudden waking in which he re-experiences the horror of his crimes.“I worried about [the victims], he admits.  Sometimes when I’m sleeping or walking [I imagine the victims]. I feel tense, uncomfortable. Sometimes I see, like a nightmare and then, I suddenly wake up feeling like I am suffocating, ” he explains. These are classic posttraumatic disorder symptoms.

Abu Yahya apparently thought he could earn easy money carrying out such operations and not suffer as a result, but it didn’t work out that way. He states, “I didn’t expect this. The difficult circumstances that I’ve been in and the nightmares I’ve seen, the terrible psychological state, and thinking about my family and children.” Now caught and prosecuted for his crimes, he also finds prison and being separated from his family difficult.  Abu Yahya is currently facing a death sentence.

Abu Yahya also fears God’s punishment.  “I ask Allah to forgive me, for all the sins we have committed. But, [I think] Allah won’t accept it.”

Unlike some  we have interviewed at ICSVE, Abu Yahya takes full responsibility for his decisions. He explains, “It’s not like they told me one thing and then another thing happened. I have a brain. I went of my own free will. They didn’t force me. That’s the thing.”

Abu Yahya wishes he hadn’t joined: “I regret joining them because I didn’t think I’d be shocked like I was, or witness what happened in front of me. It’s bigger than what I thought.”  He also advises others not to repeat his mistake, pointing out that ISIS does not offer any solution to sectarian conflicts or afford a good means of making a living:“[Those who join] will find no solution [in ISIS]. There is no solution at all [with the Islamic State.] [It’s all the] same things, the same difficult circumstances, the explosions and the car bombs. I advise others not to think about [ISIS]. Not only not to join them, but also not to think about them. The final outcome is either prison or death.”

Do you believe the Abu Yahya is telling the truth about his experiences inside ISIS?

How do you think it was for Abu Yahya, growing up as a school dropout in the fourth grade and living his whole life in poverty under international sanctions?

What do you think of Abu Yahya motivations for joining ISIS?

Do you think it was a good decision for him to join?

What do you think of his posttraumatic nightmares and thoughts for his victims?

Do you believe he suffers in prison, facing a death sentence?

Do you feel his sentencing is fair given his crimes?

Do you agree or disagree when he states that Islamic State is not able to offer any good solutions to sectarian strife?

What responsibility do governments have to ensure a good economy and peaceful sectarian living?

In Islam, the means do not ever justify the ends. According to Islamic teachings, if you were to commit atrocities in order to establish an Islamic State, you would bedamned in hell for each and every sin you committed. In the Quran Allah says: “Whoever killed a soul, except for a soul slain, or for sedition in the earth, it should be considered as though he had killed all mankind, and that whoever saved it, should be regarded as though he had saved all mankind.” (Surah al-Maeda/Aya: 32).

According to the Quran, Allah also made obligations on Muslims, and he and his Messenger explained the means by which Muslims can perform such obligations. In Islam, the means never justify the ends. Instead, the means and the ends should both be religiously justified. In addition,  whoever carries out wrongdoings is held responsible for them when meeting Allah on the day of reckoning.

Any ISIS members, or members of other violent extremist groups, should think twice before committing such atrocities, and if they participated in such atrocities, they should seriously repent before they die and meet their maker to avoid punishment.

Another point worth mentioning relates to repentance. In Islam, there are two types of rights. The first type is sanctioned, or applies, only to Allah, while the other to other people. If someone commits a sin of the first type, such as not fasting during the month of Ramadan, then repentance consists of, or dictates, to first stop doing it, second, to express regret for sinning, and lastly, to state repentance to Allah and ask for his forgiveness. The second type of rights concerns acts such as stealing someone’s money or killing someone by accident. Repentance in the second case is similar to the previous process, but also requires making reparation to the persons harmed, as in returning the stolen money to its rightful owner, or in the case of an accidental killing, to pay a specified amount (5 kg) of gold to the family of the deceased, unless the family has pardoned the killer and does not want the money. Without making reparations, repentance for such sins will not be accepted by Allah.

Regarding the ability to repent and seek forgiveness from Allah throughout one’s lifetime, there is a tradition of the Prophet (PBUH) in which he said: “A believer continues to guard his Faith (and thus hopes for Allah’s Mercy) so long as he does not shed blood unjustly. “(Sahih Bukhari-6469). Thus, killing innocent people will be a way to hell (unless the doer repents before he dies), for the Prophet (PBUH) said: “Allah accepts a slave’s repentance as long as the latter is not on his death bed [that is, before the soul of the dying person reaches the throat.]” This hadith is considered trustworthy and true, as it was categorized by Sunan al-Tirmithi as being recorded by Abdullah bin Omar, the companion (who is the son of Omar the second Caliph), as hassan, or true. Al-Tirmithi is one of the prominent scholars who wrote a book containing the traditions of the Prophet (PBUH). His book contains the sahih, which are considered definitely true; thehassan, which are considered truebut not as strong as the ones before, and the weak. Hassan is thus a category of accepted hadith, but it is a lower category than the sahih (definitely true), meaning this tradition is respected as true and it is always possible, up to one’s death, to seek repentance for one’s sins.

Timed Transcript of Dreams of Islamic State Bombings in Baghdad

1:09     I sometimes played as the attacker position, and other times as a defender.

1:15     Abu Yahya describes having had a hard life from childhood onward, living through Saddam Hussein’s rule, the Iraqi sanctions and then the U.S.- led coalition invasion of Iraq.

1:25     When ISIS came, he claims he was exhausted and decided to take easy money for enacting violence.

2:40     Abu Yahyatries to deny his feelings for the victims of his crimes, but later admits he did suffer.

3:38     The difficult circumstances that I’ve been in and the nightmares I’ve seen,

4:04     [It’s all the] same things, the same difficult circumstances, the explosions and the car bombs.

4:27     Sponsored by the International Center for the Study of Violent Extremism www.ICSVE.org