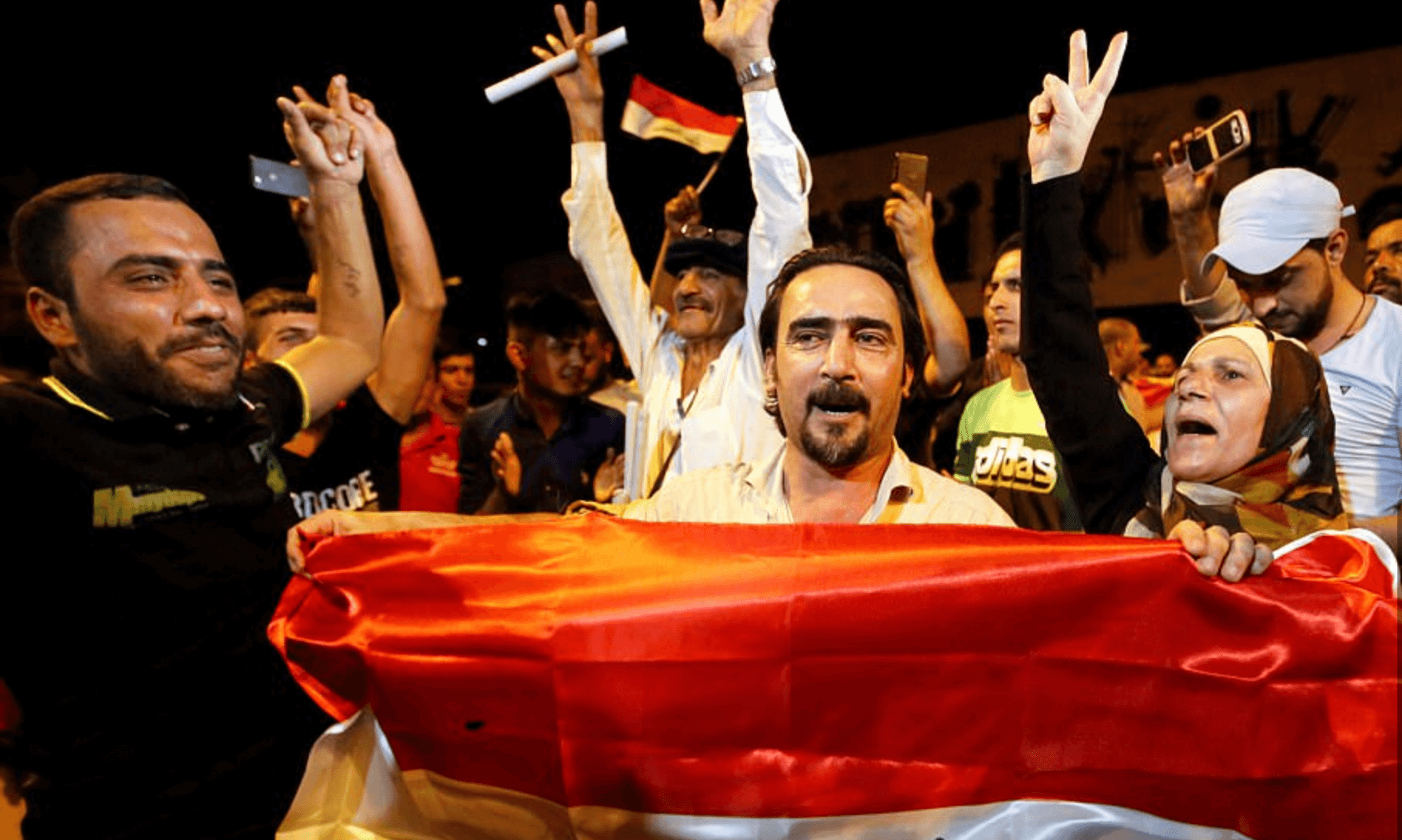 The final victory over the so-called Islamic State won’t be won until its ideas have been dismantled and discredited.

BAGHDAD—We arrived here this month just as Iraqi Prime Minister Haider al-Abadi declared the territorial defeat of the so-called Islamic State. We had come here as researchers from the International Center for the Study of Violent Extremism (ICSVE) to interview imprisoned ISIS cadres, but suddenly found our plans disrupted: Everyone took the day off as the prime minister declared Dec. 10 a national holiday.

Downtown Baghdad was busy with organized parades on the ground and fighter jets roaring overhead. The streets were alive with improvised celebrations. At one point we watched as a group of young Iraqi men stood atop a moving minivan, somehow keeping their balance while shouting joyfully and waving Iraqi flags.

Taking a brief foray to Baghdad’s 52nd Street to have a snack and dessert, we sat with Iraqis in a restaurant—living life as normal. It seemed as if a nightmare had ended.

At its peak between 2014 and 2016, ISIS held nearly one-third of Iraq’s territory. Its propaganda poisoned the minds of thousands, and Iraqis suffered greatly in ways that are still difficult for many of them to talk about—the horrors are too hard to bear.

An estimated 300,000 children and teens lived under ISIS rule. Their universities were destroyed. The curricula of elementary and high schools were replaced with ISIS ideology and training, including lessons on how to make IEDs, engage in combat, or wage suicide attacks.

Some young people were recruited, others were forced into camps, while still others attended ISIS-run schools to learn, among other things, how to behead a human being. Those whose parents managed to keep them at home were still exposed to ISIS brutality: Whenever they went out they could watch ISIS propaganda on television screens that were placed all over the ISIS-controlled cities, running nonstop. Worse still, they saw ISIS beheadings and other atrocities in front of their eyes.

Iraqi parliamentarian Maysoon al-Damluji bemoans the complete lack of treatment programs aimed at these children and asks that such programs be quickly and efficiently organized.

When it comes to disputing ISIS propaganda, which is one of the specialties of our organization, everyone agrees that ISIS was skilled in the way it used the media, particularly social media, while the national and international actors who opposed it needed to play catch up.

Saad Maan, spokesman for the Iraqi Ministry of Interior, says the Iraqi government learned to fight back using media to quickly confront the lies of ISIS, including showing the testimony of ISIS survivors who were arrested rather than “martyred” in Islamic State operations. His ministry also showed that some attacks that ISIS claimed as glorious events never happened in fact. On several occasions, the U.S. military used aerial video footage from its warplanes and drones to dispel the claims made about its own operations.

“The group has lost its territory, but not its brand.”

In Baghdad, we were told that there is hardly a family that has not lost a loved one to the fight against ISIS. Civilians and soldiers alike were killed.

To the north, the fight against ISIS led to the near-total destruction of the recently reclaimed city of Mosul, once a vibrant metropolis and the second largest city in Iraq. Now it looks like a moonscape.

At Prime Minister al-Abadi’s “Conference on Countering Daesh Propaganda and Ideology” (Daesh being an Arab acronym for ISIS), one of the Iraqi speakers addressed the question of foreign fighters from Europe and elsewhere who traveled to Syria and Iraq to fight for the “caliphate.”

His remarks about Scandinavians, Britons, and French citizens, among others, coming to his country to try to overthrow its government underscored how strange, unconventional, and uncommon it was to have upwards of 40,000 foreign fighters stream into one’s country (and nearby Syria) to join an organization hell-bent on destroying one’s own existing form of governance.

The fight against ISIS has been a hard one. It has been a team effort, with the U.S.-led coalition of over 30 countries offering technical support and air power while the Iraqi militias and military finally bravely defeated one of the world’s most horrific enemies.

Yet, as we see the territorial defeat of ISIS in Iraq, we also hear from all the Iraqi experts gathered here, as we have heard in months past, great concern over the huge flow of messages that came out of ISIS, which flooded social media, and which still exist.

Here at the conference, the commander of the the Combined Joint Task Force-Operation Inherent Resolve, Lt. Gen. Paul Funk, reported that ISIS’ media capability has been degraded by 85 percent.

Yet the Iraqi military, police, and government experts gathered here all worry that the ISIS ideology that seeped deeply into the minds of many, particularly the young people who lived under them, may still be potent. They fear its virulence and its continued resonance. If its ideology endures we could see a reemergence here of violent extremism, perhaps under a new name.

Indeed, we see the resonance of ISIS far beyond the borders of Iraq. It was echoed recently in New York City, where first an Uzbek and then a Bengali immigrant heeded the call to mount attacks in downtown Manhattan. We have seen the same in Europe. The group has lost its territory, but not its brand.

“How can we convince our youth that they can be part of the decision-making, that they can have economic opportunities and futures far from the extremist groups?” one of the Iraqi speakers asked participants at the conference. “Who among the activists and government can help come up with solutions?”

Later in the week, we interviewed an ISIS defector, the 66th defector, prisoner, or returnee we have talked to for our project. This time we were in a Baghdad prison as we listened to young Abu Jihad, as we called him to hide his true name. He wasn’t far from home—the 23-year-old was from the Dora neighborhood in Baghdad—but it will be a long time before he sees it again.

Abu Jihad was recruited as a minor into ISIS during a short stint in prison. Released from jail, he came out completely transformed: his mind poisoned by an ISIS recruiter. On his release, he immediately telephoned members of ISIS that his recruiter had told him to contact, and they lost no time training and equipping him for bomb attacks against police and so-called collaborators of the Iraqi state, usually placing explosives outside their doors and detonating them from a distance.

After his fifth attack, Abu Jihad learned he had killed not the policeman who was his target, but a baby boy.

“I can’t close my eyes without seeing that baby,” Abu Jihad told us. “I am haunted by what I did and beg Allah to forgive me.”

When we ask him to talk about whether or not joining ISIS worked out for him, he proclaims, “ISIS lies. They lied to me about making a Sunni state. I wanted to believe it because I wanted a Sunni state to gain my rights. But because I believed them I got prison, constant nightmares. I ruined my life.” And much or all of it will be spent behind bars.

Abu Jihad was only spared the death penalty because he was a minor when he joined the “caliphate’s” ranks.

After interviewing him, we walked past a seemingly endless display of headshots of other prisoners. All bore notes saying they had already been executed for their crimes on behalf of ISIS.

Killing the men may solve some of the problems created by the ISIS “caliphate.” But the final victory in this war won’t be achieved until their ideas have been dismantled and destroyed as well.

Anne Speckhard, Ph.D. is the Director of the International Center for the Study of Violent Extremism (ICSVE) and Adjunct Associate Professor of Psychiatry in the Georgetown University School of Medicine.

Ardian Shajkovci, Ph.D. is the Research Director of ICSVE and Adjunct Professor of Counter Terrorism at Nichols College.