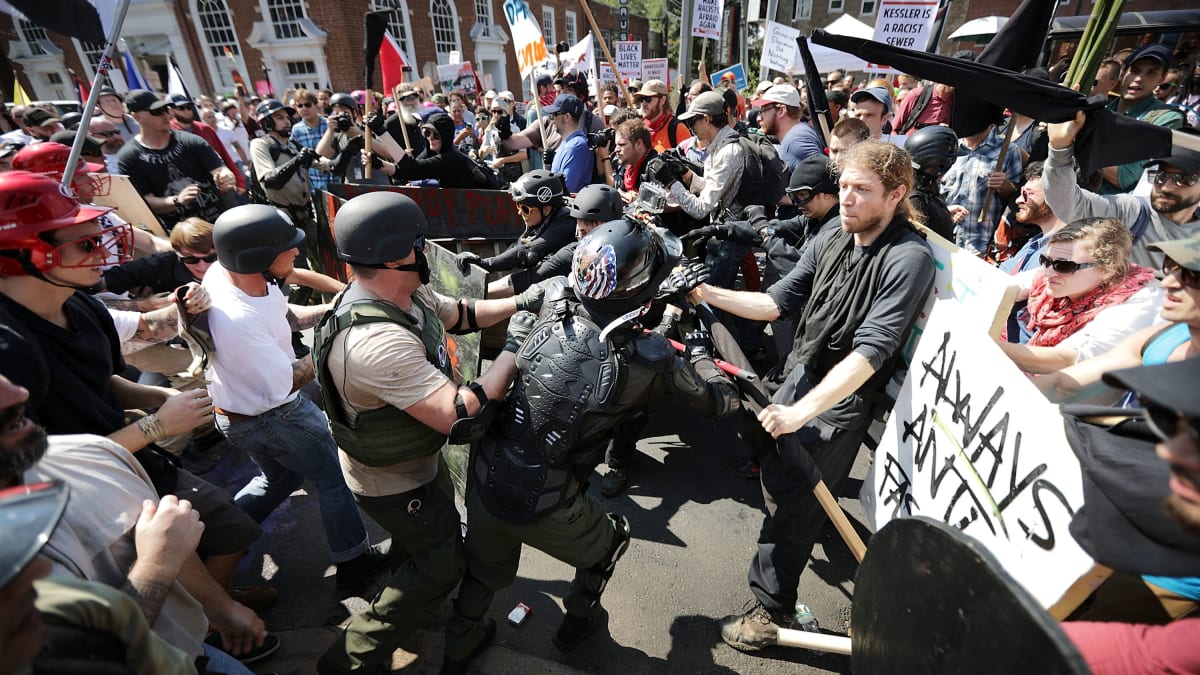 In the midst of the growing Black Lives Matter protests since 2020, the word “Antifa,” has increasingly appeared online and in the mainstream media. Antifa can refer to different things in different places, but is generally considered a movement or idea, rather than an organized group, which brings together individuals who want to take a stand against fascism, often using violence to do so. Antifa activists feel strongly that peaceful and law-abiding resistance is not enough to stop fascist movements from mainstreaming; hence the Antifa slogans of “Punch a Nazi in the face,” which later became “Punch a MAGA in the face.” It should be noted that the working definition of fascism, according to one Antifa activist interviewed by the first author includes “extreme nationalism, xenophobia, scapegoating, closing borders and usually oppression of women or class of people.” The interviewees also maintain that their conception of violence excludes property damage including breaking windows, destroying property, setting fires, and spray-painting cars and buildings.

Debates continue to swirl as to Antifa’s status as a violent extremist or terrorist group, or even as an organized group at all, but few scholars and even fewer politicians and media figures have explored, however, the effect that Antifa – however it is categorized – has on the recruitment and radicalization efforts of far-right and white supremacist violent extremists in the United States.

Presently, we provide the first sample (n = 51) of qualitative examinations of the effects of interactions and encounters with Antifa on current and former members of far-right, white supremacist, and hate groups. We argue that, if Antifa’s goal is indeed to raise the cost of participating in far-right violent extremism, and not simply to wreak havoc and incite violence at otherwise peaceful protests, the results of the present study suggest that their tactics are generally ineffective. Rather, interactions with Antifa, according to current and former members of white supremacist groups, provide fuel for the proverbial fire in a few different ways.

For example, Fred describes Antifa as “a decentralized body like Anonymous, but when it comes to White Power national socialist[s], that’s when they gather and extend. Tires slashed, windows broken, they’d find out where our cars were parked. They’d start [by throwing] bottles of urine at us, [trying] to attack us.” He explains, “There are two sides of the extreme who hate each other. They are both sides. Antifa and NSM [National Socialist Movement] clash only becomes stronger. Bonds inside the groups strengthen on both sides. [We had] stun guns, flashlights, and batons to defend [ourselves]. Worrying about Antifa always brought us closer. Two extreme groups pushing against each other’s opposite force.”

TM, who led the KKK’s branch in Germany, said that his group would take similar actions with Turkish gangs as the NSM took with Antifa: “We got in violent clashes, street fights with Turkish gangs. We would go into a part of town more populated by immigrants to get attacked, but we wanted to blame them for attacking us [and say that] they are the bad guys. One time a girl got hit over the head with a beer mug. One got stabbed one time, and I got shot. [We’d say], ‘Look how uncivilized, savage, they are.’ It justified what we believe in.”

Russell describes a fight with Antifa in which he claims he was protecting protesters outside of a Planned Parenthood:

I told our group, if they get violent this week, we need to respond. [It’s] okay to use self-defense. They lit a flag on fire; I saved the flag. [The] Antifa leader kicked me on the hand. We went after them […] We whipped the crap out of them. They way outnumbered us [but] they ran away crying. They never showed up again.

Greg argues that many fear that others knowing about their previous hateful affiliations will prevent them from living improved lives. After leaving his skinhead group, Greg started removing others’ racist tattoos for free: “I’ve had people say let them live with [the tattoos], let them pay for it, [but] we are people, we make mistakes, we are human beings. It’s easy to hate a Nazi, but having compassion for a person that made a mistake, that’s hard.” He describes the difficulty that many formers have in reintegrating into mainstream society: “I had a client three months ago, huge swastika on his stomach. [He had] mixed race grandchildren and a Hispanic son-in-law. He was invited to go to the pool. He has a swastika on his belly from 20 years ago. They have no idea. He can now enjoy life with his family. [He] doesn’t have to worry about his grandchildren wondering why he has a Nazi symbol on his stomach. [He gets to] get rid of causing fear and hatred.”

Josh P. says that he was initially driven to join the Proud Boys because of his encounters with Antifa. He says that on the day of the “Million MAGA March” in November of 2020, members of Antifa followed him to a bar and tried to jump him, but they were prevented from doing so by a group of Proud Boys. As he explains, “I hung out with them that day. There were some scuffles with Antifa, three fights. They all swung at me first. I am a trained fighter. One swung a knife at me. Another one stabbed right in front of me. None of us [Proud Boys] to my knowledge had weapons. No one was able to hit me. I had a knife swung at me. I moved his arm and knocked him out after.” Other times, he claimed, he wanted to fight Antifa in defense of the police. He says that he heard that Antifa was using “spray bottles of piss at the cops. I was infuriated.” He continues, “I wanted to protect the cops,” and told his police officer friends, “I can do what you are not allowed to do.” After January 6th, however, Josh was arrested in part because of his violent actions toward the Capitol Police and for rioting in the Capitol.

It is clear from our research that violence by counter-protesters and those identifying as Antifa fuels the fire of radicalization and extremism, convincing the violent extremists that their cause is just and noble and that they are indeed under attack. At best, threats by Antifa might raise the cost of overt participation in white supremacist activities to the point that an individual disengages from their group, but there is no evidence that this would lead to deradicalization, wherein the individual experiences an attitudinal change and denounces the white supremacist ideology. Alas, disengagement without deradicalization can leave the individual vulnerable to re-engagement, especially if they feel that they have lost and not replaced the sense of belonging, acceptance, and purpose which their violent extremist group provided to them. Therefore, we encourage those working to curb the spread of far-right violent extremism in the United States and elsewhere to focus on deradicalization through psychosocial interventions which challenge the individual’s beliefs while simultaneously addressing their grievances, real and perceived, which initially motivated them to join their groups, and providing them with a new network of social support to replace that previously provided by their violent extremist group.

Anne Speckhard, Ph.D. is Director of the International Center for the Study of Violent Extremism (ICSVE) and serves as an Adjunct Associate Professor of Psychiatry at Georgetown University School of Medicine. She has interviewed over 700 terrorists, violent extremists, their family members and supporters in various parts of the world including in Western Europe, the Balkans, Central Asia, the Former Soviet Union and the Middle East. In the past five years, she has in-depth psychologically interviewed over 270 ISIS defectors, returnees and prisoners  as well as 16 al Shabaab cadres (and also interviewed their family members as well as ideologues) studying their trajectories into and out of terrorism, their experiences inside ISIS (and al Shabaab). She, with ICSVE, has also developed the Breaking the ISIS Brand Counter Narrative Project materials from these interviews which includes over 250 short counter narrative videos of terrorists denouncing their groups as un-Islamic, corrupt and brutal which have been used in over 150 Facebook and Instagram campaigns globally. Since 2020 she has also launched the ICSVE Escape Hate Counter Narrative Project interviewing over 50 white supremacists and members of hate groups developing counternarratives from their interviews as well. She has also been training key stakeholders in law enforcement, intelligence, educators, and other countering violent extremism professionals, both locally and internationally, on the psychology of terrorism, the use of counter-narrative messaging materials produced by ICSVE as well as studying the use of children as violent actors by groups such as ISIS. Dr. Speckhard has given consultations and police trainings to U.S., German, UK, Dutch, Austrian, Swiss, Belgian, Danish, Iraqi, Jordanian and Thai national police and security officials, among others, as well as trainings to elite hostage negotiation teams. She also consults to foreign governments on issues of terrorist prevention and interventions and repatriation and rehabilitation of ISIS foreign fighters, wives and children. In 2007, she was responsible for designing the psychological and Islamic challenge aspects of the Detainee Rehabilitation Program in Iraq to be applied to 20,000 + detainees and 800 juveniles. She is a sought after counterterrorism expert and has consulted to NATO, OSCE, UN Women, UNCTED, the EU Commission and EU Parliament, European and other foreign governments and to the U.S. Senate & House, Departments of State, Defense, Justice, Homeland Security, Health & Human Services, CIA, and FBI and appeared on CNN, BBC, NPR, Fox News, MSNBC, CTV, CBC and in Time, The New York Times, The Washington Post, London Times and many other publications. She regularly writes a column for Homeland Security Today and speaks and publishes on the topics of the psychology of radicalization and terrorism and is the author of several books, including Talking to Terrorists, Bride of ISIS, Undercover Jihadi and ISIS Defectors: Inside Stories of the Terrorist Caliphate. Her research has also been published in Global Security: Health, Science and Policy, Behavioral Sciences of Terrorism and Political Aggression, Journal of African Security, Journal of Strategic Security, the Journal of Human Security, Bidhaan: An International Journal of Somali Studies, Journal for Deradicalization, Perspectives on Terrorism and the International Studies Journal to name a few.  Her academic publications are found here: https://georgetown.academia.edu/AnneSpeckhard and on the ICSVE website http://www.icsve.org
Follow @AnneSpeckhard

Molly Ellenberg is the Facebook Research Fellow at the International Center for the Study of Violent Extremism [ICSVE]. Molly is a doctoral student in social psychology at the University of Maryland. She holds an M.A. in Forensic Psychology from The George Washington University and a B.S. in Psychology with a Specialization in Clinical Psychology from UC San Diego. Her research focuses on radicalization to and deradicalization from militant jihadist and white supremacist violent extremism, the quest for significance, and intolerance of uncertainty. Molly has presented original research at NATO Advanced Research Workshops and Advanced Training Courses, the International Summit on Violence, Abuse, and Trauma, the GCTC International Counter Terrorism Conference, UC San Diego Research Conferences, and for security professionals in the European Union. She is also an inaugural member of the UNAOC’s first youth consultation for preventing violent extremism through sport. Her research has been cited over 100 times and has been published in Psychological Inquiry, Global Security: Health, Science and Policy, AJOB Neuroscience, Frontiers in Psychology, Motivation and Emotion, Behavioral Sciences of Terrorism and Political Aggression, Journal of Child and Adolescent Trauma, Women & Criminal Justice, the Journal of Strategic Security, the Journal of Human Security, Bidhaan: An International Journal of Somali Studies, and the International Studies Journal. Her previous research experiences include positions at Stanford University, UC San Diego, and the National Consortium for the Study of Terrorism and Responses to Terrorism at the University of Maryland.