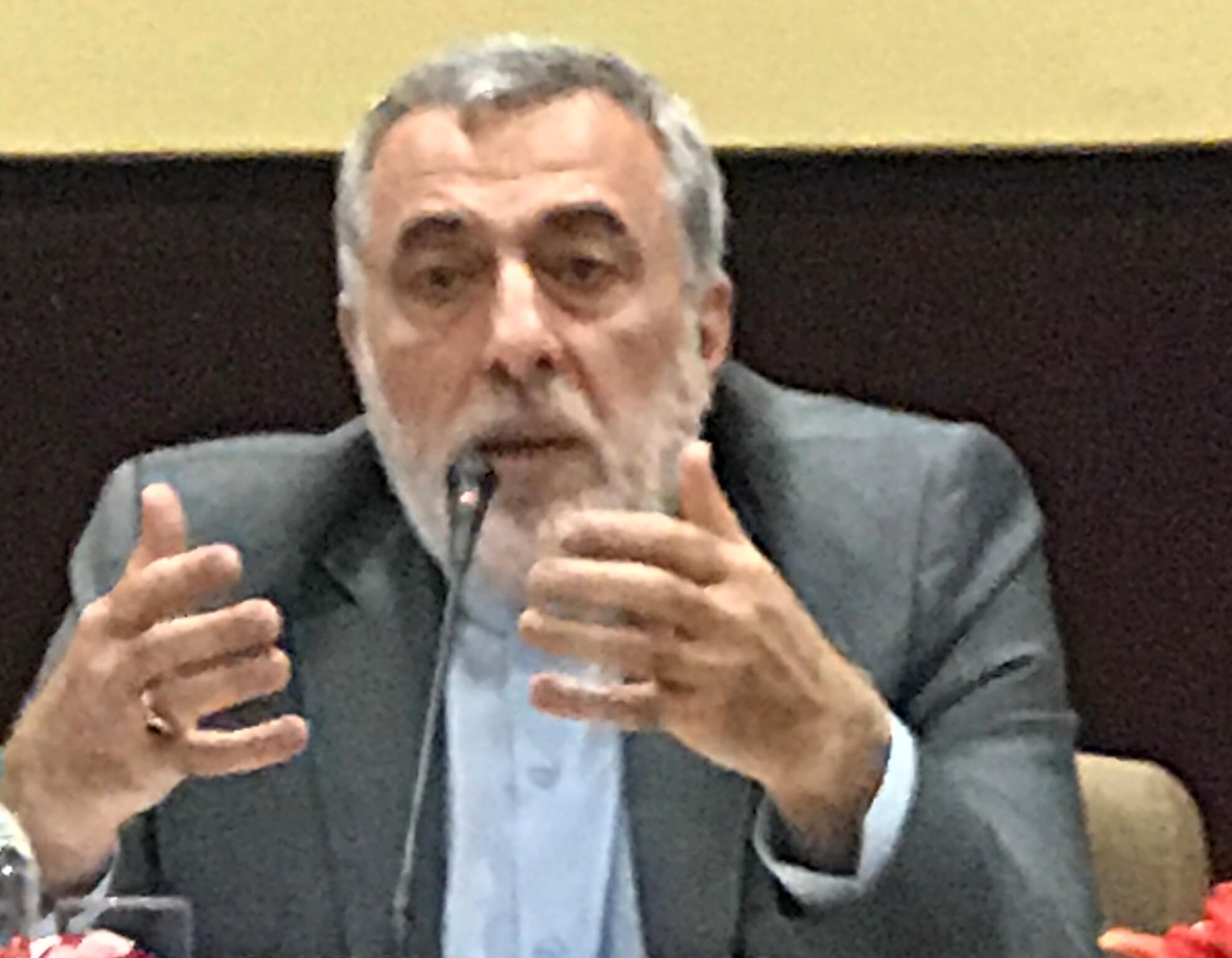 Iranian Ambassador Hossein Sheikhoislam, currently serving as Advisor to the Foreign Minister of Iran has a long history of studying different forms of governance. Studying at Berkeley, University of California, he witnessed the 1979 Iranian revolution from afar. When he returned to Tehran he was angered, along with his people, about the deposed Shah, Mohammad Reza Pahlavi, whose security services were guilty of torturing Iranians being given refugee in the United States, despite Iranian demands for him to return to Iran and face charges. When 52 U.S. diplomats were taken hostage in 1979 by students, Ambassador Sheikhoislam, still a youth himself, agreed to put his cultural and English language skills to use. He came to the U.S. Embassy and stayed with the hostages through the entire 444 days they were held, assisting  the Iranian students as they tried to piece together shredded embassy documents and understand CIA actions in their country.

Today he speaks from the podium in New Delhi, India at the Combatting Terrorism: Evolving an Asian Response 19th Asian Security Conference of the Indian Institute for Defense Studies and Analyses. He still strongly disagrees with Western interventions “other countries that decide against the will of other countries,” and states that “some people decide they want to change the legitimate government in Syria and this is why we face what we do today. The genie is out of the bottle. No one can put it back.” While this public statement may place simplistic blame for the conflicts in Syria and Iraq on the West for trying to remove Syrian President, BassarAssad, privately Ambassador Sheikhoislam admits that President Assad made mistakes during the Arab Spring and needs to correct his course if he stays in power.

Indeed, if one looks carefully at the politics of Middle Eastern countries there are far more problems than just Western interventions that fuel violent extremism, although there is no doubt that American and Western interventions are a factor. Political exclusion, that is, not allowing people to participate in the political decisions that affect their futures, their families, and their lives, along with corruption are some of the biggest reasons for recruitment into violent extremism. It’s clear that terrorist groups of today recruit based on political grievances and beliefs in oppression and grievances. Their narratives expound upon these grievances and promise their recruits, “Come with us and we will free you from oppression and deliver justice to you. Never mind that these promises and current dreams of the “Caliphate” never materialize.

To those facing injustices, frustrating socio-economic factors and political grievances these promises play an extremely strong role in fueling violent extremism. Likewise, Ambassador Sheikhoislam agrees that all through the region there is a huge youth bulge while unemployment for youth can be above thirty percent. And while unemployment is very high, salaries are often very low and decisions to hire are based on “wasta” or connections. In the face of “youths having no futures” as Ambassador Sheikhoislam puts it, religious scholars in the region are also busy giving fatwas in behalf of violent extremism. And security apparatuses acting in behalf of regimes often do not enforce the law, follow human rights or deliver security for the people. These are all political elements present in the region in support of terrorism recruitment—in support for beliefs in an alternate reality, the dream of an “Islamic Caliphate,” that groups like ISIS peddle.

“Being a diplomat I always try to find a solution,” Ambassador Sheikhoislam states as he nods in agreement that many of these factors are fueling violent extremism—this despite his resentment of Western powers that have continued to interfere with governance in the region, attempting regime changes that have undoubtedly cost suffering for many of the people living there. Speaking to someone who was central in holding and interrogating our U.S. hostages in the seventies proves fascinating, particularly when he reflects on the current politics of the region and the Shia/Sunni divide.

When I ask Ambassador Sheikhoislam about my recent trips to Jordan, where I am used to hearing complaints about the “Jews” or Israelis and now instead, hear complaints about the Shia, he agrees the Shia/Sunni divide in the region has grown concerning. I tell him about a recent interview with leaders of the Sunni resistance living in Jordan who showed me horrific film clips of Shia militias dragging a fifteen-year-old Sunni boy accused of being in ISIS to a tank that then drove over him, crushing his skull.

Despite this, the Ambassador expresses hope that Iraqi leaders can deal fairly with the displaced Sunni population who are trying to decide if it’s safe to return home, if they can live with their Shia neighbors, and trust the security sector. Yet, human rights groups report that Sunnis who have ISIS fighters even in their extended relatives are currently facing collective punishments: home destructions and arrest. I ask the Ambassador if he agrees that given the long history of sectarian killings with responsibility on both sides over the last decade, if peace-building in Iraq can only occur if real security and justice are provided that allows for displaced Sunnis to return home with confidence. Yes, security must be provided for peace building to take root, Sheikhoislam agrees, “Security is for all, and the absence of security will harm everyone.”

But perhaps most importantly, he points out that the Shia/Sunni divide may not be as much about differences in religious beliefs as it is in interpretations of Islam regarding political leadership. “Shia who are living in a parliamentarian system, threatens monarchies in the region,” he states. Explaining the Shia interpretation of Islamic scriptures, he explains, “There is a fundamental difference between our country making a parliamentary system versus monarchies [in the region] about if Islam interprets for appointed or elected leadership.”

Indeed monarchies in the Middle East have allowed, and at times supported, fundamentalist interpretations of Islam that insist that it is forbidden to innovate from early interpretations of the Prophet and his Companions. This is in stark contrast to Iranian views, according to Ambassador Sheikhoislam in which Iman Khomeni states, “He has the power to change any of the principles of Islam if it harms Islam. Imam Khomeni says it is the duty of the leaders after the Prophet to make changes as necessary, but others say no.” And this also applies to support for monarchies in the region.

“Our brothers in Islam [read Sunnis] say whoever is in power is the ruler, no matter how he came: just or unjust, capable or incapable, good or bad. No matter, he is in power and he must be followed and obeyed. Sunni’s rules are in the hands of Kings, so they didn’t allow Islamic studies to be developed,” Ambassador Sheikhoislam explains. According to Iranian, Shia views he continues, “The right of people is the highest right,” and “in Islam the rights of the person to the others is something that even God cannot forgive. [For instance] if I owed money to my friend and I die, only my friend can forgive my debt. God doesn’t forgive it, only my friend can. Voting is the same. My right is to vote, and for the one who is voted for, he also has that right. This is the combining of religion and politics. Our Sunni brothers do not believe this about voting, and this is what is creating the biggest problem between us and some of our neighbors.”

Yet, Ambassador Sheikhoislam harks back to his first point about nonintervention in the rights of others—reiterating the Iranian view that only the citizens of a country themselves have their right to decide their leaders and their futures. “We don’t feel it’s up to us to convince our neighbors. We have set this principle in our constitution, it is the people’s right to determine their futures and their leaders.”

Explaining Iran’s practices regarding leadership he continues, “In our constitution we gather the whole views and require that our leader meets seven criteria including that he must understand Islam and be capable of understanding the Koran and Hadiths. He must hold the apparatuses of wisdom, logic and conscience. He must be just, righteous, direct well and understand the times and politics. To find who has these 7 characteristics we have 100 experts who are chosen from provinces to chose the leader.” He explains that according to Iranian views, leaders are chosen by the people and are legitimate “only if people follow him, acceptance of the people is a condition for leadership” and that he can be removed if he fails in these characteristics. “Imam Khomeni says it is the duty of the leaders after the Prophet to make changes as necessary” and in Iran “we vote for our leaders.”

This question in Islam regarding the legitimacy of leaders and if Islam interprets for appointed or elected leadership is at the heart of the matter according to Ambassador Sheikhoislam. Sunnis believe, according to him, that they must obey and not revolt against even unjust and unrighteous leaders.

Certainly, we see that monarchies in the region who fear losing power flirt with violent extremists, at times allowing them to exist in their countries because it’s easier than cleaning up corruption, nepotism and providing real economic opportunities, security and hope to their people. But violent extremists tell the people another message selling violence as an answer to change the system.

As Ambassador Sheikhoislam sees it, “After so many studies we should know this—good is good for everybody, bad is bad for everybody, no matter what it is.” Iranian views on political leadership may have something to offer in this regard.

Anne Speckhard, Ph.D.  is Adjunct Associate Professor of Psychiatry at Georgetown University in the School of Medicine and Director of the International Center for the Study of Violent Extremism (ICSVE). She is also the author of Talking to Terrorists, Bride of ISIS and coauthor of ISIS Defectors: Inside Stories of the Terrorist Caliphate; Undercover Jihadi; and Warrior Princess. Dr. Speckhard has interviewed nearly 500 terrorists, their family members and supporters in various parts of the world including Gaza, West Bank, Chechnya, Iraq, Jordan, Turkey and many countries in Europe. In 2007, she was responsible for designing the psychological and Islamic challenge aspects of the Detainee Rehabilitation Program in Iraq to be applied to 20,000 + detainees and 800 juveniles. She is a sought after counter-terrorism experts and have consulted to NATO, OSCE, foreign governments and to the U.S. Senate & House, Departments of State, Defense, Justice, Homeland Security, Health & Human Services, CIA and FBI and CNN, BBC, NPR, Fox News, MSNBC, CTV, and in Time, The New York Times, The Washington Post, London Times and many other publications. Publications: https://georgetown.academia.edu/AnneSpeckhard

Reference for this article: Speckhard, Anne (March 7, 2017)Appointed or Elected Leaders as Part of the Answer for Addressing Violent Extremism in the Region:  A View from Iran ICSVE Brief Reports https://www.icsve.org/brief-reports/appointed-or-elected-leaders-as-part-of-the-answer-for-addressing-violent-extremism-in-the-region-a-view-from-iran/