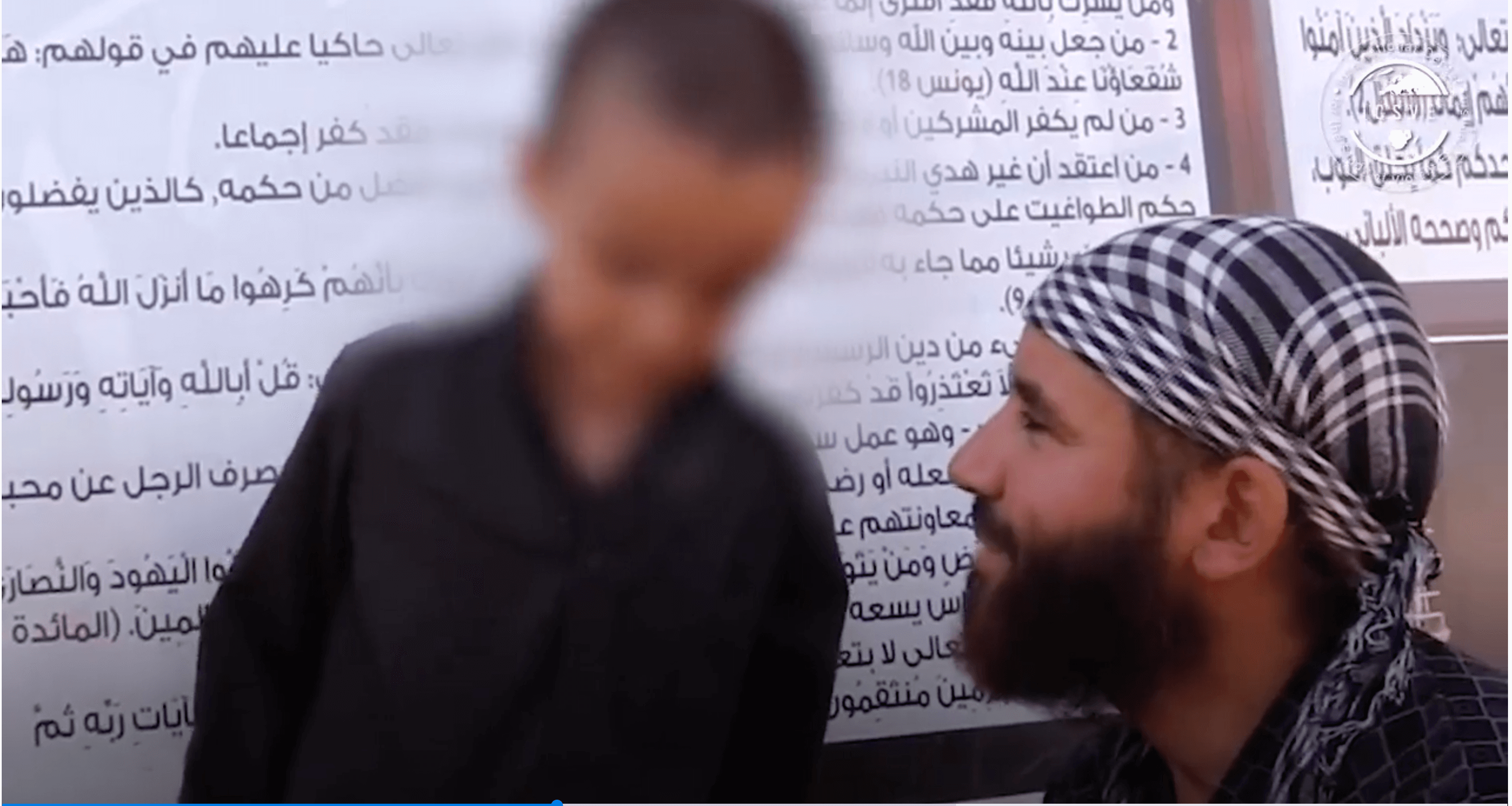 A Child of the Islamic State is the 20th counter narrative video clip in the ICSVE Breaking the ISIS Brand series. It features Abu Albani, a Kosovar foreign fighter who traveled twice to Syria; first to join and fight with the Free Syrian Army and later to join and fight for ISIS. It also concerns Ardian, an eight-year-old Kovovar boy brought to ISIS by his father without the permission or knowledge of Ardian’s mother. Abu Albani was interviewed in Kosovo prison in June 2016 by Anne Speckhard, with Haris Fazilu serving as a translator, and A Child of the Islamic State was produced by Zack Baddorf and ICSVE staff.

Abu Albani’s initial motivations for traveling to Syria were similar to many among the​ 850 men and women who left from the Western Balkans, with many of them having experienced  war in their own homeland.  He had witnessed the horrors of war firsthand as a young boy when Serbs came to his home to threaten his mother and brother and also remembered that Americans had come to their rescue, which left him with a sense of responsibility towards others suffering under war.

After viewing videos of Assad’s atrocities, Abu Albani became upset and heeded the call for foreign fighters to come and assist Sunni Arabs. His initial involvement was likely out of truly idealistic motives.

When Abu Albani returned to Kosovo after some time fighting in Syria he ended on a terrorism watch list. Later, he decided to travel again to Syria—the second time to join ISIS and assist in building their so-called “Caliphate.” To do so, he had to talk his way past suspicious Kosovar border guards.

Abu Albani had made contacts with the Albanian leadership in Syria and believed he could play an important role in the newly emerging Islamic State. Once in ISIS, he fought for them on a daily basis, but overtime grew disillusioned as he saw how Albanian widows were being forced by ISIS-mandated laws to either suffer isolated at home without food and basic needs or agree to remarry other fighters. Abu Albani also became highly distressed by the plight of eight-year-old Ardian who was left to go hungry, beaten by ISIS leaders, and abandoned and frightened during Coalition bombardments at night.

According to Abu Albani, he argued with ISIS leaders about these issues but was unable to get them to enact justice, as he believed it should occur. As a result he risked he and his wife’s life by defecting from ISIS, paying a smuggler to take them out across the Turkish border. Perhaps to ensure his own freedom back in Kosovo, or out of truly humanitarian motives, Abu Albani took the boy as well as they escaped ISIS.

While Abu Albani risked everything to defect from a group he became disillusioned with due to their mistreatment of women and children, he became angered after being convicted and put in prison in Kosovo for participating in a terrorist group. Unsure if he made the right decision to leave ISIS—given his current prison sentence—he remains ambivalent on that score.  But as he states, he doesn’t regret rescuing the boy, who most likely in his mind represents his younger self.

The transcript of A Child of the Islamic State is below and the video clip can be viewed here.

A Child of the Islamic State

0:01     Eight-year-old Kosovar Ardian, was taken to ISIS-held Syria by his father without his wife’s knowledge or permission.

Ardian is a pseudonym

0: 07    After bringing Ardian to Syria, Ardian’s father was immediately sent to Iraq by ISIS.

0:11     He left Ardian in Syria with an Arab group and asked the Albanians to take care of him.

0:22     The hospital was later bombed and his father stopped communicating via the Internet

In some way, it was the responsibility of the Islamic State to take care of him.

0:39     [Ardian] was entitled to receive a food allowance from ISIS to cover food and drinks, nothing major.

1:05     Although my wife was sick at the time, I started discussing with someone in Kosovo

1:39     I remember once Ardian was staying at [Commander] Lavdrim’s house.

1:49     Lavdrim took his wife and his wife’s child and fled the building.

1:52     They fled to the countryside to hide where there were no bombings.

1:56     They left Ardian behind and alone in that building all night by himself.

1:59     The building was shaking all night because of the bombs and he was all by himself.

2:04     The fact that he didn’t evacuate Ardian and left him all by himself.

2:19     It is a disaster and unfortunate for a Muslim to hit another Muslim

2:22     without being sentenced by the shariah court first.

2:25     It is a catastrophefor such things to happen in an Islamic State.

2:43     While Allah was with him, he had no support from people and that’s what bothered me.

2:50     I needed to figure out how to illegally get out of Syria without being caught by ISIS,

3:16     because ISIS has a strong presence along the border crossing.

3:25     However, they too, disobeyed and broke many laws when I disagreed with them.

3:37     Abu Albani ended up in prison, sentenced to 5 years in prison for organizing and participating in a terrorist organization and

3:54     Sponsored by the International Center for the Study of Violent Extremism

Anne Speckhard, Ph.D. is Adjunct Associate Professor of Psychiatry at Georgetown University in the School of Medicine and Director of the International Center for the Study of Violent Extremism (ICSVE) where she heads the Breaking the ISIS Brand—ISIS Counter Narratives Project. She is the author of: Talking to Terrorists, Bride of ISIS and coauthor of ISIS Defectors: Inside Stories of the Terrorist Caliphate; Undercover Jihadi; and Warrior Princess. Dr. Speckhard has interviewed nearly 500 terrorists, their family members and supporters in various parts of the world including Gaza, West Bank, Chechnya, Iraq, Jordan, Turkey and many countries in Europe. In 2007, she was responsible for designing the psychological and Islamic challenge aspects of the Detainee Rehabilitation Program in Iraq to be applied to 20,000 + detainees and 800 juveniles. She is a sought after counterterrorism experts and has consulted to NATO, OSCE, foreign governments and to the U.S. Senate & House, Departments of State, Defense, Justice, Homeland Security, Health & Human Services, CIA and FBI and CNN, BBC, NPR, Fox News, MSNBC, CTV, and in Time, The New York Times, The Washington Post, London Times and many other publications. Her publications are found here: https://georgetown.academia.edu/AnneSpeckhardWebsite: https://www.icsve.org  Follow @AnneSpeckhard

The Clear Path into the Islamic State Caliphate

https://youtu.be/l5O4m3t2YGA Anne Speckhard The Clear Path into the Islamic State is the 117th counter narrative video…

Joining Islamic State for the Sake of Martyrdom

By Anne Speckhard, Ph.D. Joining Islamic State for the Sake of Martyrdom is the 15th video…

A Belgian Family in the Islamic State

https://youtu.be/phZsHWBzcbE Anne Speckhard A Belgian Family in the Islamic State is the 77th counter narrative video…