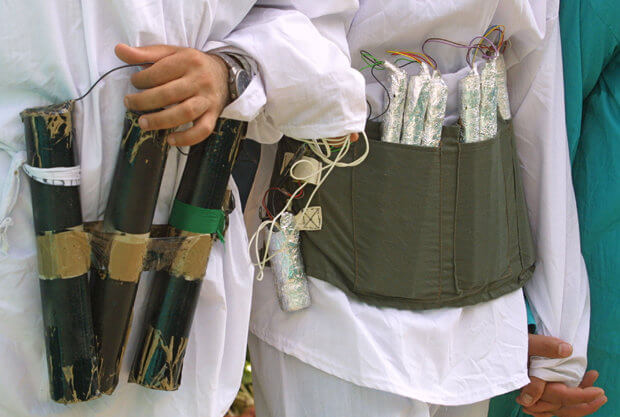 A Baghdad Bombing by the Islamic State features thirty-eight-year-old Abu Jassim, an Iraqi interviewed in 2017 in Baghdad prison by Anne Speckhard and edited by our ICSVE video editors. It highlights how ISIS, and groups like ISIS, are proclaiming over the Internet and through face-to-face recruitment that violence and terrorist attacks can bring rights to Sunni Iraqis.

As the father of six children, Abu Jassim became convinced that ISIS could restore Sunni dominance in Iraq and agreed to serve the group. They called upon him to drive two suicide bombers into central Baghdad where they exploded themselves after he had driven away. Abu Jassim did not think much at the time about the acts he was involving himself in, but now that he is in prison serving a life sentence he has had time to reflect.

Now, Abu Jassim regrets his actions and wishes he had not left his wife and children without their father. He begs her forgiveness. He also fears that Allah may never forgive him, although he prays daily for forgiveness. He fears that he may be ultimately cast into hell.

Abu Jassim advises his own children, as well as other Iraqi and international youth, to avoid networks of hate that are active on the social media platforms of Twitter, Facebook, Instagram and Telegram. He also advises them to avoid “bad friends” and those that would bring trouble into their lives.

We learn in Abu Jassim’s story how experiencing real, or perceived, sectarian oppression can drive a person into violence if a terrorist group is active spreading promises of hope and offering the opportunity to take action. Abu Jassim says he did it partly for money, but more out of religious beliefs that were manipulated by the group. Now with time to reflect, he admits that the Islam of ISIS is not what it should be and that killing innocents is not part of his religion. He also states that he joined the group partly out of the overwhelming pressures he was feeling in his life. His words underline the importance of government’s responsibility to not let ethnic or sectarian segregation and oppression spread in the country and for religious leaders to counter religious claims of “martyrdom”, jihad, and so on that manipulate some into participating in terrorist violence thinking it is a legitimate way to struggle for political rights.

Timed transcript of A Baghdad Bombing by the Islamic State video:

A Baghdad Bombing by the Islamic State

0:03 It was only once [that I transported suicide bombers].
0:07 [I gave] them a ride, like a taxi, a taxi to the tunnel,
0:15 from Yusufiyah to Baghdad.
0:18 I knew that they will be suicide bombers.
0:20 I didn’t know who they would kill.
0:23 I didn’t even know where they planned to execute this operation.
0:27 I am a mere transporter. [It’s] as if they hired me.
0:31 I delivered them to their destination. After that I have nothing to do with them.
0:36 Believing their claims that ISIS would deliver rights to the Sunni Iraqis, Abu Jassim         transported two suicide bombers to explode themselves in Baghdad.
0:47 ABU JASSMIM
Former ISIS Soldier
I joined ISIS a year ago.
0:51 It isn’t a matter of happiness or anything,
0:56 rather it is a matter of psychological pressure.
0:58 I’m 38 years old.
1:01 I’m married and I have 6 children.
1:04 There was one guy with us [at work].
1:07 [He talked to me about] how Sunnis are oppressed and how we should defend and such things.
1:12 There are a lot of videos from ISIS that affected our society.
1:21 The most are on social media: Facebook, Twitter, Instagram, Telegram.
1:29 TV channels. There are some channels
1:33 that broadcast [their] videos, news channels.
1:37 [These videos] planted the most hate
1:41 and spread terrorism.
1:45 I was influenced by them.
1:47 [I did this] out of our belief and for money as well.
1:53 [But] it was more out of the belief they convinced us with
1;59 than for the money.
2:01 [Now I realize,] this is a thing against humanity.
2:07 We didn’t realize that until we found ourselves in an abyss.
2:18 Now I regret it.
2:21 I haven’t [seen my family] since they took me in.
2:22 They didn’t arrest me from home. They arrested me from the street.
2:23 [My family] will know that I am at fault,
2:27 even though I don’t know where they are.
2:31 I ask my wife to forgive me for the wrong I’ve done,
2:40 and to look after herself and my children,
2:47 and to set their own fate.
2:50 I ask my children to listen to their mother.
2:56 My punishment from Allah is a thing that I can’t judge.
3:02 I pray ‘Oh Allah, I have sinned. I ask you to forgive me.’
3:08 Allah might forgive me if I repent,
3:12 and Allah might punish me and send me to hell.
3:16 I advise everyone to get away from this path.
3:20 I advise all youth to avoid bad friends,
3:25 the friends that bring you trouble.
3:31 Avoid these networks [that spread hate],
3:35 and be a role model to the rest of the youth through your good deeds.
3:41 [I advise youth] to provide for his family, and his country and his people, the right
thing
3:49 to show the people who are not Muslims the correct picture of Islam,
3:55 unlike what we did, which was providing the wrong picture of Islam.
4:02 ISIS says that they want to rule with the Islamic shariah.
4:09 I tell you this—they are wrong because they kill innocent people.
4:17 Islam is a religion of peace.
4:20 Islam is what Prophet Muhammed established.
4:25 This Islam of ISIS is not that.
4:28 I tell [my children] don’t commit
4:31 the same mistake I have made.
4:33 Don’t befriend bad people.
4:35 Listen to your mother
4:38 and live without me.
4:43 The Truth Behind the Islamic State
4:46 Sponsored by the International Center for the Study of Violent Extremism
www.ICSVE.org
4:52 See more at
TheRealJihad.org